The dangerous limits of American empathy: Why do we need reminding that a refugee could be "the next Steve Jobs"?

In their visceral fear of terrorism, Americans have lost sight of the human beings they're casting aside 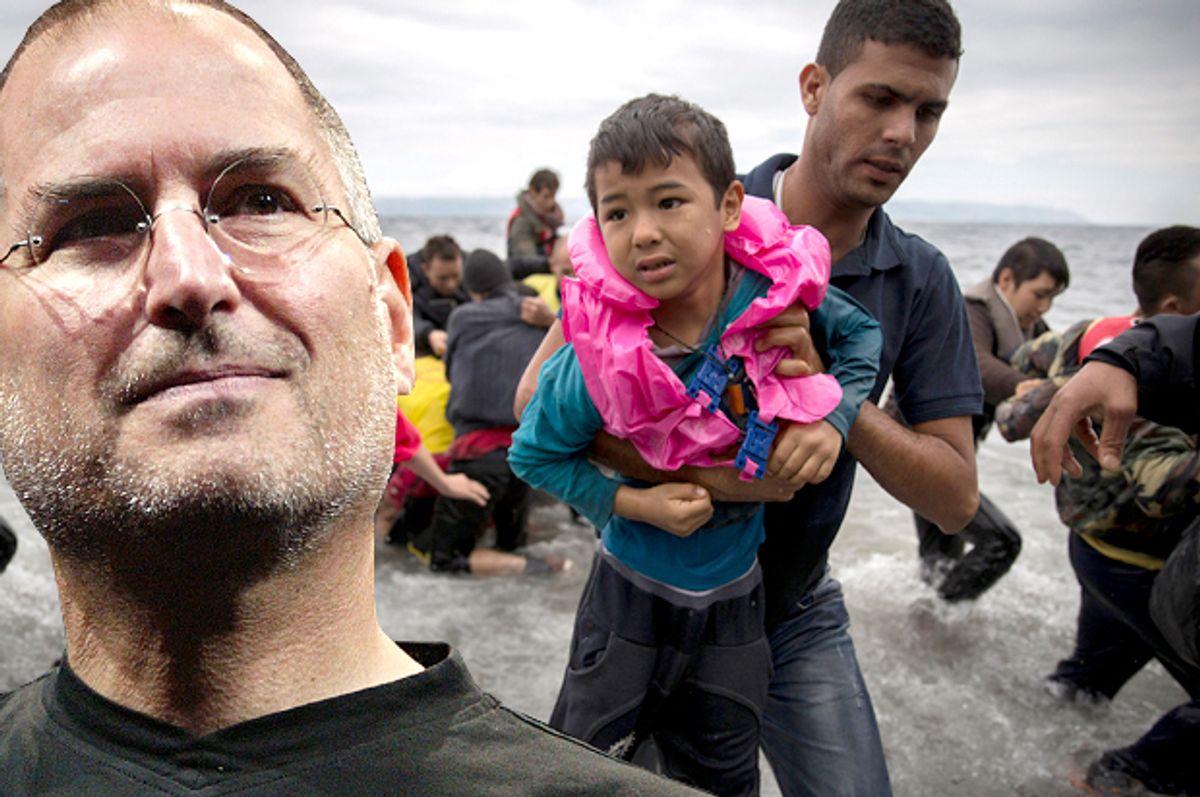 A question that's been on everybody's mind lately, echoing across the New York Times and the GOP primary: If you had a time machine, would you go back in time and kill Baby Hitler?

I propose an alternate version of that question, one that skips the time machine. This is a question for today, in the wake of the horrible attack in Paris last Friday. If you had to decide whether to admit a 3 year old Syrian refugee to the U.S., knowing that child might go on to father someone like Steve Jobs, one of the co-founders of Apple, would you do it? Or would you reject the child just in case he ended up being a terrorist?

It seems like a no-brainer. After all, the panic about refugees in the wake of the Paris attack appears to have been a deliberate goal of the attack. One of the attackers used a forged passport based on the identity of a now-dead Syrian soldier to enter or re-enter Europe posing as a refugee. The attacker appears to have tossed the passport before he set off his suicide bomb, just far enough away from himself that it would be associated with him, but would not be destroyed in the blast. That resulted in its quick discovery and an ensuing panic in Europe about refugees committing attacks. Yet that was deceptive. All the attackers IDed thus far are actually French citizens. (The guy who used the forged passport remains unidentified.)

So politicians in Europe and the U.S. have spent the last several days panicking, thinking that refugees had committed Friday's attack, when in reality a bunch of French guys did (albeit ones who had trained with ISIS in Syria).

The risk that ISIS will use the large number of people fleeing ISIS as a way to re-enter Europe under an assumed identity is still very real: Because so many people are coming in at once, the authorities in places like Greece and Croatia can't vet refugees as well as they normally might. But in reality, France (and Belgium, where a number of the terrorists were living) has an internal problem, and it appears the refugee crisis was just used to obscure the movements of Europeans.

French President Francois Hollande -- who might have been one intended targeted on Friday, as he was at the soccer game where attackers tried to enter and blow themselves up -- appears to recognize that. Today, he recommitted to accepting the 30,000 refugees over the next two years that France had already agreed to welcome. “France should remain as it is. Our duty is to carry on our lives,” Hollande said.

American politicians, however, have been far more cowardly than France's president. One after another -- mostly Republican -- governor has called for a halt to refugees from Syria, including the governors from two of the most common destinations for Middle Eastern refugees, Texas and Michigan. They're joined by members of Congress who are alternately calling to ban or impose new restrictions on refugees.

The thing is, because Syrian and other Middle Eastern or North African refugees have to take a plane to get here (or close to here), the numbers are far smaller -- just 1,800 refugees in the last two years, as compared to hundreds of thousands in Europe -- meaning the U.S. can still apply the very stringent vetting process it has been using. Plus, not many of the refugees the U.S. accepts are military aged males. While you can't entirely eliminate the risk an aspiring terrorist would use the refugee process to enter the country, there are actually easier ways to get into the country, such as on student or tourist visas, especially given that the perpetrators were French citizens.

Yet all that hasn't calmed the panic of those opposing refugees, such as New Jersey Governor Chris Christie who insisted on Monday he wouldn't even take orphans under the age of 5.

So back to Baby Steve Jobs' father. His biological father, Abdulfattah Jandali, came indirectly to the US from Homs, Syria, in the 1950s. While Jandali himself doesn't claim any credit for his biological son's success -- Jobs was raised by adoptive parents --Apple's founder nevertheless wouldn't have been born if the U.S. hadn't admitted Jandali over a half century ago. Using the same stunted biological determinism inherent to the Baby Hitler question, Jobs -- and with him, one of the country's most successful tech companies -- would never have happened without our willingness to admit immigrants from Syria.

Invoking Jobs is largely symbolic, of course, because of his tie to Syria. But other tech companies, including Google, have been founded by first generation immigrants the US has generously welcomed.

Each refugee may be a terrorist (though the chances are small, especially for 3 year olds).