More ethnic than religious: How the Islamic State uses religion to attract allies 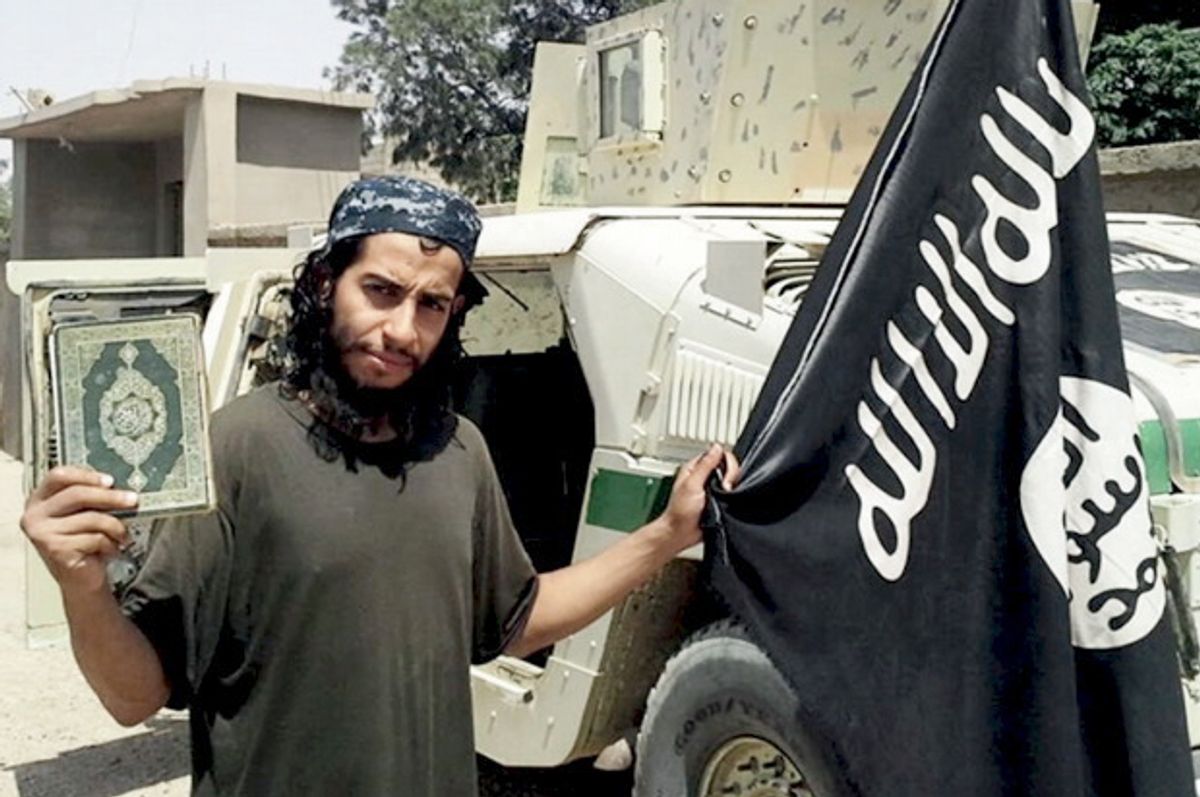 The group known as the Islamic State, or ISIS, has claimed responsibility for the terrorist events of Nov. 13 in Paris. In those coordinated attacks, the perpetrators shouted “Allahu akbar”—“God is the greatest”—before employing assault rifles and suicide belts to kill more than 100 in cold blood across the French capital.

Much has been written about the religious nature of ISIS. In a provocative piece that appeared in the Atlantic earlier this year Graeme Wood asked “what ISIS really wants,” and concluded the answer is ISIS seeks a Messianic end of the world. But in many ways this analysis is a reflection of the Islamic State’s own branding—its brochures to the world.

ISIS calls itself a “caliphate,” after the Muslim empires that emerged following the death of the Prophet Muhammad in the seventh century. And the group’s judicial and tax structures are modeled after conservative interpretations of Islamic law. Radical individuals and militant groups from across the ethnic and national spectrum have been drawn to this religious symbolism, and the caliphate has gone global.

But despite what on the surface appears to be a pan-Islamic group similar to Osama bin Laden’s al-Qaida organization, ISIS needs to be understood for what it really is: a Sunni Arab organization with narrow ethnic goals that has co-opted a religious message to attract allies and govern more effectively. Knowing this will be necessary to defeat ISIS, on the battlefield and beyond.

What ISIS Really Wants Is a State

This year, I visited the front lines against ISIS near Kirkuk, Iraq, as well as the city of Urfa in the south of Turkey, a hotbed of support for the organization. Last year I also traveled to Jordan and the West Bank. After speaking with refugees, activists, NGO workers and senior U.S. officials, I’ve come to the conclusion that there are two faces of ISIS.

One comprises the global and largely youthful cadre of followers who view the Islamic State as an actual caliphate—a purist, ethnically inclusive and idealized state. This portion of ISIS likely includes those involved in the Nov. 13 attacks, and it’s the one that the media and politicians focus on. The other face of ISIS, however, is its core leadership based in Iraq and Syria. This second group appears to be in the process of forming a kind of “Sunnistan,” a nation-state exclusively by and for Sunni Arabs.

The leadership of ISIS is mostly lieutenants of Saddam Hussein’s former Baath regime. Many of these Baathists were put out of business when the United States invaded Iraq in 2003 and enacted a policy of de-Baathification, a purge of thousands of high-level civil service professionals. Among those secular figures who subsequently joined the insurgency and coopted religious messages were Izzat Ibrahim al-Douri, a former general, and Hajji Bakr, a colonel in Saddam’s military intelligence services. Both men have been identified as having played key roles in the resurgence of ISIS in recent years. A Kurdish commander I spoke with in Iraq told me that up to 90 percent of ISIS officers in the country were former Baathists. Again, this is Saddam Hussein’s government—a secular institution that chauvinistically favored Sunni Arabs over Iraq’s majority of Shi‘a.

When I visited the south of Turkey this March, a Syrian from Raqqa, the current ISIS capital, told me the Islamic State seemed to have come out of nowhere when it took over in 2013. “It had to be organized by the intelligence services of a country. It was perfectly organized.” He was right.

None of this is to claim that Islamic radicalism and Sunni ethnic goals are mutually exclusive. Public religion can offer legitimacy and invite a clear distinction between supporters and detractors—something that helps the group rule more effectively. But the Islamic State’s acts of brutality, in the form of crucifixions, decapitations and burnings, are more a product of the group’s Baathist past than any millenarian or religious ideology. The violence is carefully calculated, deliberate and extreme so as to diminish the likelihood of defection—a strategy that Saddam’s government, and for that matter U.S. allies like Saudi Arabia, perfected over the decades.

We often think of ethnicity as referring exclusively to linguistic heritage. “Arabs” are those with roots in Arabic-speaking countries, “Hispanics” speak Spanish. But ethnicity, in the broader sense of the word, can describe a variety of identity types. Ethnicity can refer to race, sect or even tribe, depending on what is politically important in a given society.

In the Middle Eastern history, sectarian identity has often carried powerful political implications. The civil war in Lebanon (1975-1990), the aftermath of the U.S. invasion (2003), and, increasingly, the Syrian civil war (2011-present), have all taken on sharp sectarian dimensions. And while sect refers to religion, in these cases differing interpretations of faith have not been the source of the problem. For Christians massacring Sunnis during the Lebanese civil war, it didn’t matter what their victims actually thought about religion, or whether they believed in God at all—many of them didn’t. “Sunni” was merely the group that Christians were targeting; the proverbial “other.”

The Islamic State has behaved very much as a sectarian movement, a jingoistic Sunni-Arab organization with little patience for those outside the rigid boundaries of their identity group. As a result, non-Sunnis, particularly the Shi‘i Arabs of Iraq, have borne the brunt of ISIS persecution. Not unlike the Hutu militias during the Rwandan genocide, ISIS set up checkpoints in Iraq when it re-entered the country in 2014. Drivers were asked to step out of their cars and pray; those who prostrated like the Shi‘a were summarily executed.

In the earlier days of pan-Arabism, during the 1950s and '60s, towering figures like Egyptian President Gamal Abdel Nasser called on fellow Arabs to unite into a single state. Back then, pan-Arabism was a secular movement that featured atheists, Christians and other minorities among the top ranks. It was an ethnic movement, in the linguistic sense of the term. But in the intervening years the Middle East has become increasingly sectarian, and pan-Arabism of the Nasserist kind is nearly impossible to imagine as a force of unity today.

Many of the divisions today can be reduced to a person’s view of Iran. Because of Iran’s support for both the Shi‘i government in Iraq and Bashar al-Assad’s regime in Syria, opinions among Sunni Arabs have hardened, and the Shi‘a have become increasingly labeled as puppets of Iran regardless of their  actual political beliefs. If they weren’t the “other” before, they are now.

An Iraqi refugee from the Sunni city of Fallujah explained his support for ISIS thus: “At least this Islamic State is better [for Iraq]. … They are killing the clients of America. The clients of Iranians. Now the Sunnis under the Islamic State are more comfortable. … A person can live as they like. As a Sunni.”

Most other Sunni Muslims I spoke with all had opinions of ISIS that ranged from ambivalence to outright support. And while many rejected the group’s extreme violence and radicalism, they saw the group as a formidable opponent of Iran—“the real enemy,” as one Syrian activist called that country. Bear in mind most of these were not radical Muslims; in fact, most didn’t even pray daily. They were Sunnis who cared about their group: us versus them.

A 2014 poll by Zogby showed that while most Sunni Arabs do not support the Islamic State, they consider it a preferable alternative to Bashar al-Assad remaining in Syria. Among Saudi respondents, nearly 60 percent felt a continuation of Assad’s rule would represent the worst outcome for Syria’s future; fewer than 10 percent put ISIS in that same category. Emirati and Jordanian opinions were similarly focused on Assad as the main threat. In each of these countries, opinions of Iran have also grown increasingly negative over the years.

During the Iraqi civil war, when ISIS was called al-Qaida in Iraq in the West, much of its support came from Saudi Arabia. Saudis, according to a 2008 study from the U.S. Academy at West Point, comprised the largest group of suicide bombers in Iraq. The study suggested the Saudis were allowing jihadists passage in order to weaken Iran’s influence over Iraq.

Al-Qaida in Iraq’s anti-Shi‘i focus led to a rift with Osama bin Laden’s al-Qaida organization, which wanted to minimize sectarian fighting and keep America as the chief enemy. AQI, despite its relatively small size, managed to fan the flames of sectarianism, most prominently when it attacked the Golden Dome Mosque in Samarra—a site the Shi‘a venerate. The response was swift, and the Shi‘i government and militias began a campaign of sectarian cleansing against Sunnis.

Today, the Saudis are beginning to shift their strategy in Syria, from one of supporting moderate groups carrying the Free Syrian Army banner, to the much more sectarian Ahrar al-Sham and Nusra Front. ISIS may be defeated on the battlefield, but if that happens there will be another anti-Shi‘i group waiting in the wings, ready to fight for a Sunni state devoid of Iranian influence.

It Will Take More Than Bombs

If the regional strategy for eroding ISIS support is to preach moderate Islam, it will fail, because religion is not at issue. Religion is merely the branding that gives ISIS a semblance of legitimacy in its otherwise barbaric and unreligious efforts.

If the plan is to bomb ISIS out of existence, that will only have a limited impact, since the group is part of a broader movement to express Sunni anger and opposition to Iran.

The terrorist attacks of Nov. 13 in Paris have inspired renewed calls to action: more troops, more sorties, a wider military offensive. And yet, the problem remains a quintessentially political one. Fighting ISIS will require a trip to the infinitely more complex nexus where political ethnicity and the regional balance of power meet.

Nathan González Mendelejis is a fellow with the Truman National Security Project. He holds a Master of International Affairs from Columbia University and a Ph.D. in political science from UCLA. Follow him on Twitter @nathangonzalezm.