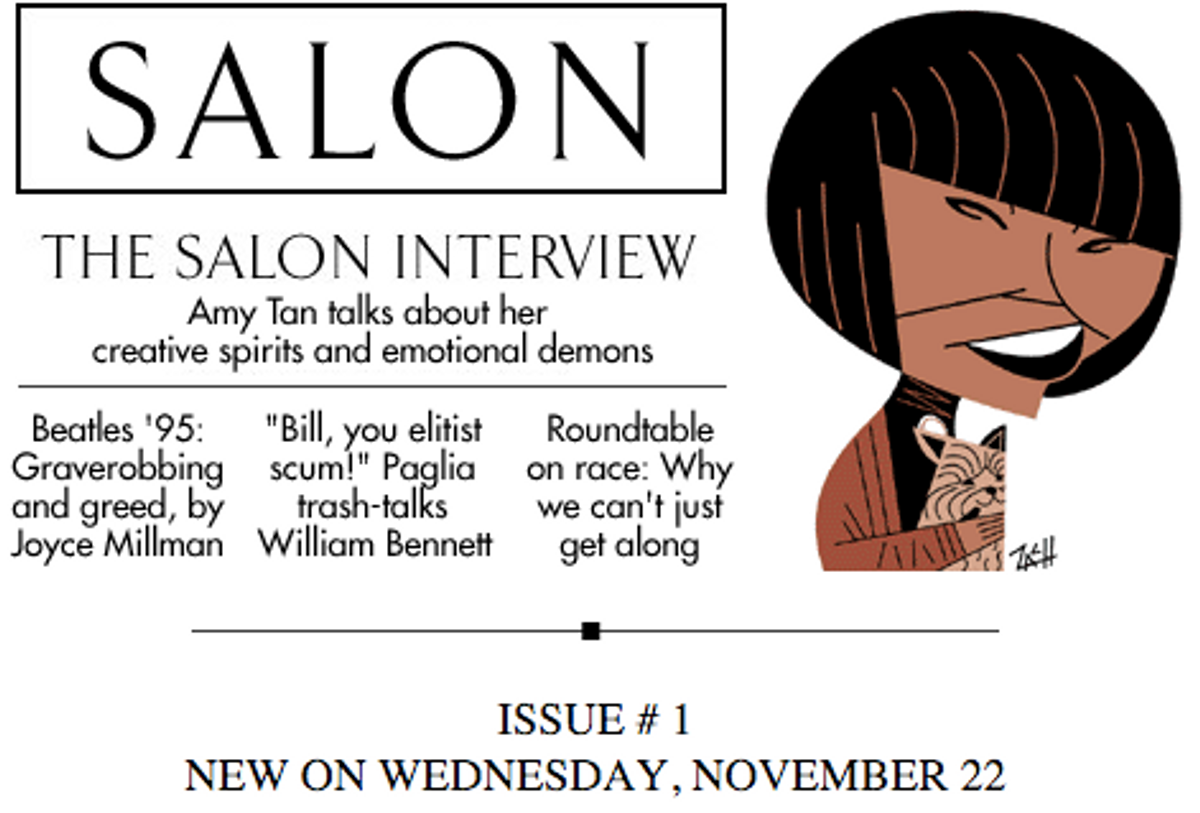 The first edition of Salon went live twenty years ago, an early milestone in the now booming world of digital publishing. As one of the earliest online news sites, Salon’s approach to sparking dialogue by blending quality journalism with cutting-edge technology was truly pioneering. We continue that tradition today thanks to the dedication of our employees and our commitment to supporting an array of strong, progressive voices, whose uniqueness and courage vocalize important perspectives.

Our amazing lineage of writers—past and present—contributed much to today’s political, cultural and media landscape. Salon’s revelations surrounding the Clinton impeachment scandals, the 2000 election debacle in Florida—or more recently, its agenda-setting discussion on racism in the United States, Charlie Hebdo, and the state of the Democratic Party—have driven the national conversation. Our Life section authors helped shape the memoir culture, while our "Mothers Who Think" series launched the myriad of "mommy" sites and blogs that are synonymous with the conversation surrounding motherhood in the twenty-first century.

This is just the tip of the iceberg; today our writers continue to challenge conventional wisdom and dominant media paradigms. They bring insightful arguments to the table and encourage the public to engage, covering an array of topics from the intersection of politics and media, the Black Lives Matter movement, the Uber-ization of modern life, and so much more.

Our peers recognize the continued excellence of Salon. In the past year, Heather "Digby" Parton was awarded the Hillman Prize for Opinion and Analysis writing and Salon won a Folio Award for General Consumer Website “design and uncompromising journalism,” recent additions to Salon’s long list of accolades over the years.

Salon enhanced its storytelling and launched original editorial video this year, a terrific complement to our brand of journalistic excellence and one that will grow. Our inventive sales team has forged new paths with their creative, bespoke ad solutions, and our tech and product teams constantly push new frontiers.

Today, over half of our audience use and interact with Salon on their mobile devices, an important development, and we constantly work to improve our mobile technology. Salon was one of the apps available at the launch of the Apple Watch last April, underscoring our commitment to innovate on both a technological and editorial level to explore new trends in online content. Going forward, we’re thinking how to best harness the Internet of Things to broaden the Salon experience.

Salon took its name from the Enlightenment-era salons where people with different points of view congregated to discuss changing opinions about society, politics, culture, science, innovation, and more. The salon culture of the eighteenth century’s intellectual revolution—informed and influenced by the scientific revolution—helped spread ideas and provoked re-examination of previously held norms. This inspiration shaped our earliest content, and continues to inform Salon’s fearless, award-winning journalism that cracks open a broader discussion and provides a high-profile platform for diverse voices that are often ignored by the mainstream media.

Salon remains at the forefront thanks to its dedication to quality journalism, making the conversation smarter, and exploring emerging technology platforms to be where our readers are. We have come a long way from the tiny online media startup begun by David Talbot in November 1995—and we could not do it without the help and support of our terrific alumni, present-day staff and readers. I’m truly thankful for Salon, what it contributes to the world, and the opportunity to work every day with terrific, intelligent, and engaged colleagues.

We will mark the anniversary year in several ways in the upcoming months. Stay tuned for further details closer to those events. In the meantime, we invite you to go back to the beginning and explore Salon’s first edition via the Internet Archive.

Wishing you all a wonderful Thanksgiving as we head into our twentieth anniversary.

Cindy Jeffers is the CEO & CTO of Salon.