Woodrow Wilson is not the Confederate flag: Scrubbing his name from Princeton is a bad idea

Woodrow Wilson was a horrible racist. But we're better off learning his history rather than erasing his name 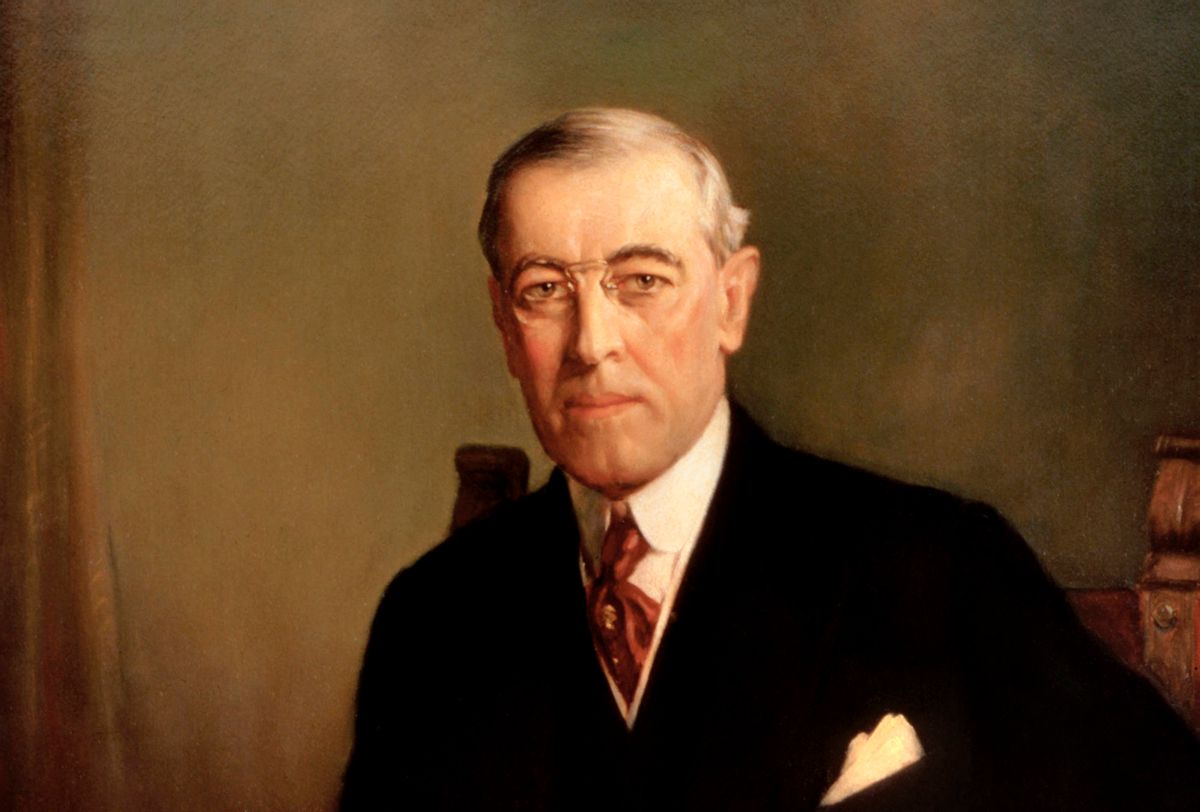 Democrat Woodrow Wilson was something of a cold fish. Stuck up, to be sure. Racist? Oh yeah. He went public praising D. W. Griffith’s horrendous “Lost Cause” classic film, Birth of a Nation, which reduced all black people to fools, openly endorsed the KKK, and even condoned lynching. “It is like writing history with lightning,” he said of the movie, “and my only regret is that it is all terribly true.” Did he misspeak? Not if you examine his 1902 History of the American People, which argued that after the Civil War, radical Republicans in Congress had caused the veritable overthrow of civilization in the South.

Wilson bashing is easy. The recently widowed chief executive courted and wed a much younger woman, whose influence over him became particularly dangerous toward the end of his term, when he fell ill and she literally spoke for him. More critically, during his presidency suffragists crying out for the actualization of liberty and equality chained themselves to the White House fence, and a number who went to jail went on a hunger strike. In 1918, he meekly went along with the Nineteenth Amendment, granting women the vote, because of the negative publicity, because he was worried about the public’s reaction to continuing protests––not because he actually supported the initiative. So he wasn’t a poster boy for modern feminism either.

But we do a great disservice to the discipline of history when we take deeply flawed historical actors and reduce to single-minded caricatures of racism, sexism, or any other –ism. The current commotion at Princeton University, where students are pressuring the administration to remove all references to Wilson, borders on the absurd. Wilson attended Princeton, where he also served as a professor of political science, then president, before graduating to the governorship of New Jersey and president of the United States. By erasing a racist’s name from a pair of buildings––the Woodrow Wilson School of Public and International Affairs and Wilson residential college; or renaming a distinguished institute (the Woodrow Wilson International Center for Scholars) and the Woodrow Wilson National Fellowship Foundation, you are merely pretending that the problem goes away. To erase a name does not acknowledge history; it erases history. You’re learning nothing about history in its demanding complexity.

Even as he entered the White House, Abraham Lincoln supported the recolonization of black Americans abroad so as to whiten the country. Theodore Roosevelt, Wilson’s contemporary, was a raving eugenicist who considered black people biologically inferior to whites. Should we simplify their legacies, too, and merely fixate on one rather outstanding flaw? Or should we teach critical thinking to undergraduates, so that the rising generation, all too comfortable with the Wikipedia way to knowledge, are obliged to weigh historiography intelligently? The answer should be obvious.

Every generation of historians injects the dominant ideology of its own moment in the sun. Today’s U.S. History college survey textbooks all emphasize the impact of slavery and race exploitation in the tortured path from the American Revolution to modernity; previous generations uniformly praised the “greatest generation” that founded the American republic, pretending that democracy was in its embryonic phase in 1776, when a parade of giant thinkers introduced the glorious personal freedoms that we always hear our politicians claiming proud citizens have “fought and died for.” We don’t have to embrace bottom-up history as the only valid interpretation when we reject the “great white men” theory of history. The discipline of history is a constant struggle with past interpretations; yet each generation comes into its own willfully blind to how future generations will pass judgment on us and our leaders for neglecting what will be the key issues of a later day.

Right now, the History Department at Princeton has posted its Spring 2016 course options. One can see quite easily whether or not Princeton professors are sufficiently attuned to students’ demands for closer attention to issues of race and equality. Here are some of the listings: HIS 386 “African-American History to 1863,” HIS 477 “The Civil Rights Movement,” HIS 280 “Approaches to American History,” which focuses on documents relating to three major events: the Salem Witch Trials, Denmark Vesey’s Slave Insurrection Conspiracy, and the Little Rock Integration Crisis. Also, an undergraduate can take HIS 315 “Colonial and Post-Colonial Africa.” HIS 447 “Ethnicity and History,” which looks at the various elements affecting discrimination and poverty. But the real kicker is HIS 402 “Princeton and Slavery,” taught by a full professor, Martha Sandweiss, who recently published the book, Passing Strange: A Gilded Age Tale of Love and Deception across the Color Line (Penguin, 2009). Which tells you just how convinced Princeton is that students should face the past honestly.

So, it is hard to come down on the side of the protesting Princeton students in this instance. Woodrow Wilson is not the Confederate flag. His symbolism does not rise to that level of insult and offense. We recommend instead that students read John M. Cooper’s marvelous biography of Wilson (Vintage, 2011). His legacy is a complicated one—in his day, as a liberal, he promoted international peace and understanding; he worked tirelessly, through diplomacy, to build institutions that he hoped would prevent a second world war.

Students at the University of Missouri had a real case to prosecute in public, because the administration had already proven itself deaf to the just complaints of African-American students; the football team dramatically stepped in to shine a national light on an issue many students personally faced. But Princeton? As an elite institution, the situation is not the same. For instance, how many African-American students have been accepted to Princeton as legacies? Better that Princeton students, with their obvious intellectual prospects, should focus on racism in our legal justice system, the connection of race to class and poverty in America, and the way racism creeps into U.S. foreign policy. Make a difference like Bryan Stevenson, Harvard Law graduate, who went on to found the Equal Justice Initiative, challenging ingrained bias against poor and minorities. Get inspired by his book, Just Mercy: A Story of Justice and Redemption (2014). If you’re already at Princeton, you’re well on your way up the social ladder. Work to accomplish something of long-lasting value.