The last JFK assassination myth: Debunking the eerie prediction that won't go away 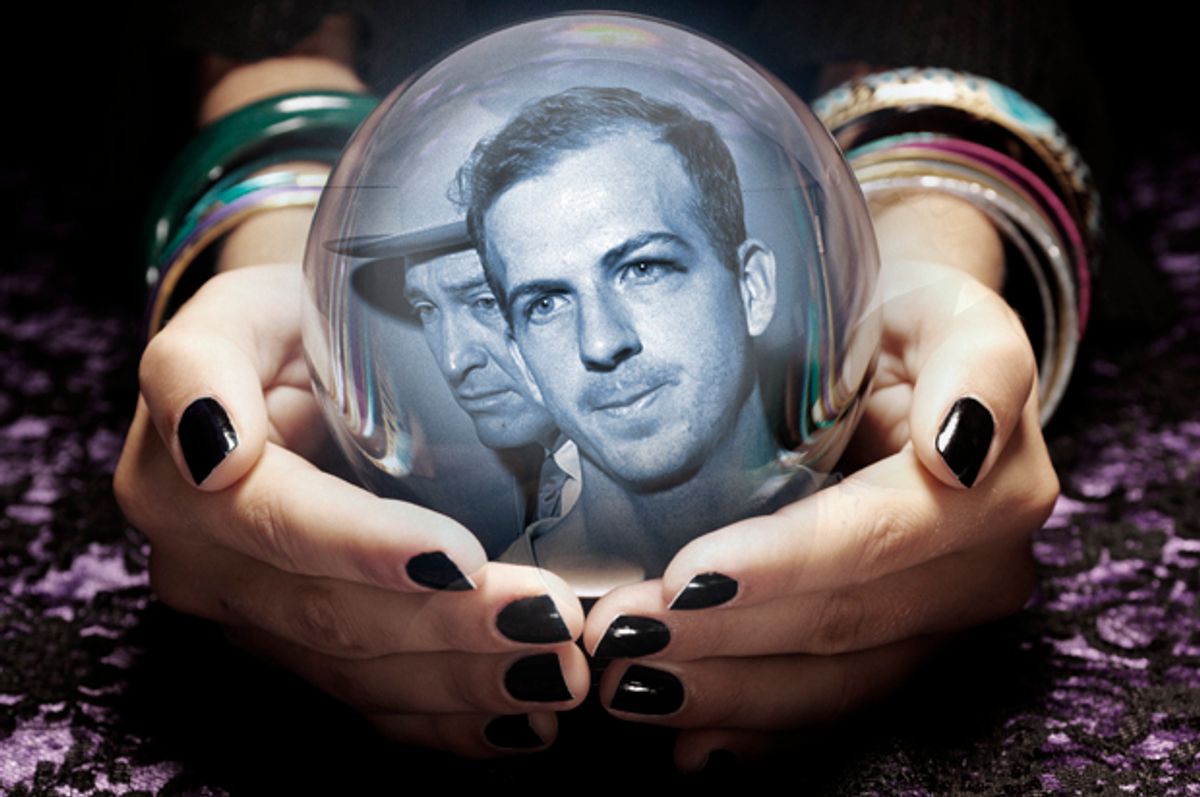 Dixon’s prediction — repeated in numerous news accounts and in her 1997 obituaries in national media — made her the best-known psychic in America. Did the prophetess really foresee the murder of a president?

Well, kinda yes and kinda no.

Dixon’s ominous foresight first appeared in a profile of the Washington socialite and seeress in Parade magazine on May 13, 1956, under the headline “Incredible Crystal Gazer.” Her prophesy appeared in the penultimate paragraph: “As for the 1960 election, Mrs. Dixon thinks it will be dominated by labor and won by a Democrat. But he will be assassinated or die in office ‘though not necessarily in his first term.’”

Okay, not too shabby.

But the myth of Dixon’s prediction got inflated over time. When she died, CNN eulogized that Dixon had predicted that the fallen president would be “a tall young man with blue eyes and brown hair,” a reasonable enough resemblance to Kennedy (though his eyes were greenish-gray). But those physical details did not actually appear in her 1956 prediction. They came in Dixon’s, ahem, enhanced description of her forecast in her post-Kennedy authorized biography "A Gift of Prophecy" in 1965.

Biographer Ruth Montgomery later complained that the publisher pressured her into cutting references to the psychic’s errors, such as Dixon’s election-eve reversal that Nixon would prevail over Kennedy. Dixon hedged on this, however, by warning that the Democrats could “steal the election” through ballot tampering, a hypothesis shared by some post-election observers.

Back to the original prediction: Prophesizing a Democratic victory in 1960 was obviously a 50-50 gambit (since Orval Faubus of the States’ Rights Party wasn’t an odds-on favorite). Dixon’s foresight that unions would prove decisive in the post-war election was also a reasonable likelihood.

And what about her statement that the executive would be “assassinated or die in office”? Eerie. But Dixon is on record making lots and lots (and lots) of predictions, most of which never came true. And, not infrequently, they were rather disturbing ones involving race riots, Communist conspiracies, terrorist attacks and military threats.

Dixon’s political leanings made her popular with conservative politicians, such as Sen. Strom Thurmond (she became godmother to the South Carolina Republican’s son) and, in the 1960s, with California’s New Age-friendly governor, Ronald Reagan. As an actor and politician, Reagan freely professed an interest in astrology, another of Dixon’s specialties. In Reagan’s 1965 memoir, "Where’s the Rest of Me?," he also named Santa Monica astrologer Carroll Righter as a good friend. (Four years later the nattily dressed bachelor became the first – and only – astrologer to appear on the cover of Time magazine.)

The Reagans were clearly comfortable around New Agers. But when Nancy was discovered consulting an astrologer during her husband’s second presidential term, it was not Dixon but San Francisco stargazer Joan Quigley from whom the first lady had been seeking guidance. Dixon had fallen from favor with the Reagans when she failed to predict, or encourage, Reagan’s ascendancy to the White House.

During the summer of Reagan’s 1980 presidential campaign, the candidate told a journalist: “I remember that Jeane Dixon … was always gung ho for me to be president — but in the foretelling part of her mind, she said back in ’68, ‘I don’t see you as president. I see you here at an official desk in California.'” Four months later Reagan was the president-elect.

So, did Dixon predict Kennedy’s assassination?

The final verdict is no. Dixon may have possessed some kind of sensitive or intuitive gift, but her fame rested on a process by which she scored an accurate hit or two out of thousands of public forecasts. Such was tragically the case with the Kennedy assassination. And, as in her 1965 biography, Dixon sometimes elaborated upon her prognostications after the fact.

Although Dixon never became the seer to the White House, she did gain one documented entrance to the Oval Office. Dixon was friendly with Richard Nixon’s trusted secretary and gatekeeper, Rose Mary Woods. On at least one occasion, Woods told Nixon about terrorist threats prophesied by Dixon, which the president raised with National Security Advisor Henry Kissinger and other officials, according to White House tapes. In May of 1971, Woods persuaded the president to personally meet with Dixon. Nixon’s Oval Office session with “the soothsayer,” as he called Dixon, also got preserved on White House recordings.

The prophetess told the president: “The Lord intended Nixon to be great …We’ll all get together and we’ll band united under the head of, actually, the father of our country — and that’s our president. And it happens to be Nixon.”

Nixon was unmoved. He responded: “Yeah, well, I tell ya, y-you could sell almost anything.”