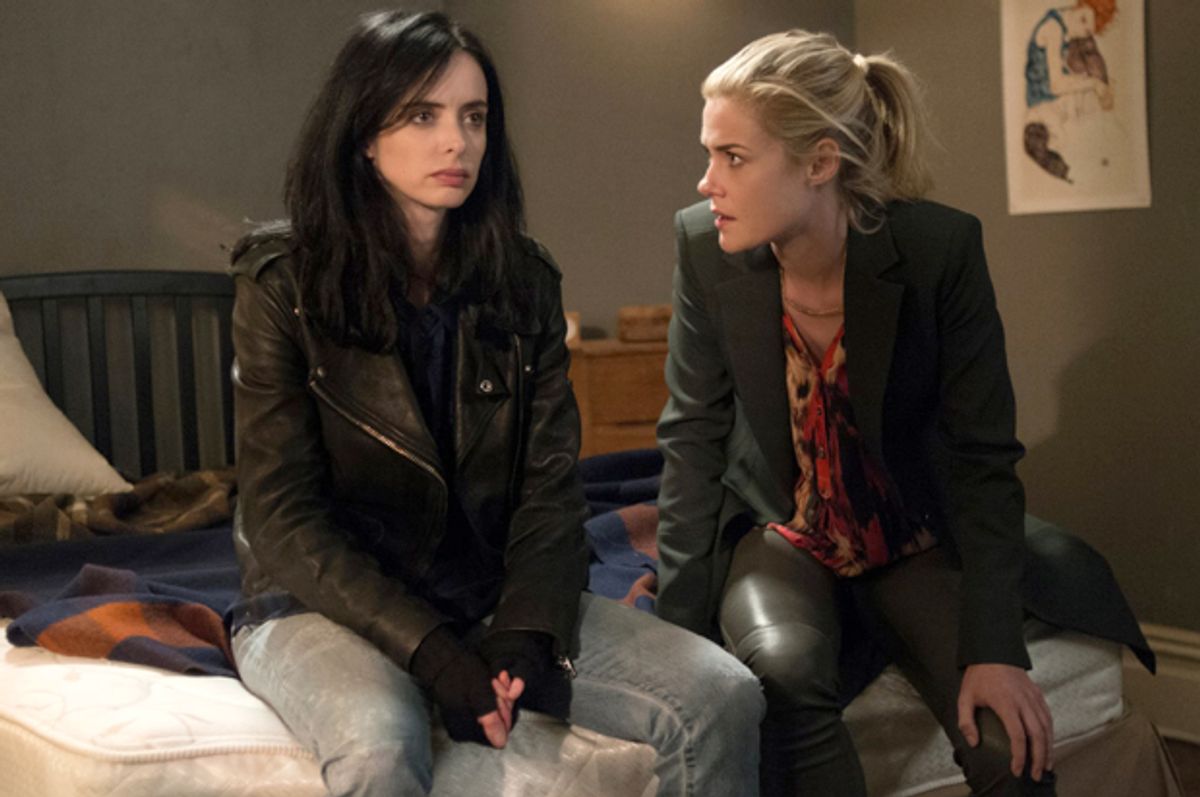 “Marvel’s Jessica Jones,” the second Marvel Studios property to be led by a female character, is best described by explaining what it is not. It’s a comic-book show, but it’s not your average comic-book show. It stars a superhero, but she’s not your average superhero. And it’s about good guys beating up bad guys, but not in the classic caped-crusader airborne battle. “Jessica Jones” is instead a story of one superhero in a hostile world—a single character’s slice in what is otherwise a sprawling, Technicolor supernatural universe. Even in the original comics the show is based on, Jessica Jones is defined by her difference from the rest of Marvel’s superheroes. She left the Avengers to be a private eye, starting her own detective agency, Alias Investigations. It helps that she can break padlocks with one hand, but her greatest asset isn’t super-strength, it’s her tenacity. And she doesn’t have a superhero alterego; if anything, she prefers the shadows to the limelight.

This is why, if you’re a newcomer to comic books, or even just not that interested in the Marvel Cinematic Universe, “Jessica Jones,” now available on Netflix, could still be for you. Aside from the fact that a few people in the story have extraordinary abilities, there are no costumes, no aliens and no easy answers. Jessica (Krysten Ritter, in the show) doesn’t run around and save the day for other people; she works cases while trying to untangle the mess that is her own life. Much like Veronica Mars, that other cult-favorite noir-ish private eye, Jessica is carrying around a central, unspoken mystery, a horrible trauma that she is barely able to live with. The story of the first season of “Jessica Jones” is that the perpetrator of the trauma—a mind-controlling psychopath named Kilgrave (David Tennant)—is looking for Jessica, and has just finally found her again.

The show is not, unfortunately, perfect. Ritter is perfect, Tennant is perfect, and the bones of the story—which come from the comics’ creators, Brian Michael Bendis and Michael Gaydos—are still completely chilling. Kilgrave made Jessica his puppet for a whole month, making her his ideal and subservient romantic partner. The word “rape” is not used until Episode 8, but it is clear, from the start, that Jessica is a trauma survivor. She copes with alcohol and insomnia; no one gets close to her, and she doesn’t get too close to anyone. The superpowers make the story bigger, broader and more tangible—Kilgrave doesn’t just bully people to doing what he wants, he gets into their heads and makes it so—but the story is very human, just the same. “Jessica Jones” is that rare genre story that uses the supernatural not to obfuscate, but instead to better illustrate a human story. And as a result, it’s an extraordinary meditation on violence perpetuated by men against women, whether that is rape, stalking, harassment or abuse. Kilgrave dabbles in all of them, and Tennant’s mad-happy performance conveys both the charisma and appeal of the abuser and his frightening, sudden ability to shift to violence.

Most horrifyingly, Kilgrave’s power is impossible to prove to the outside world. The wounds he causes are technically “self-inflicted”—in one of his most horrible acts, he orders two attendants to rip the skin off of each other’s faces if he doesn’t come back in two hours. Jessica spends most of the season trying not to stop Kilgrave but to prove that he is responsible; one of the most awful recurring themes of “Jessica Jones” is how unreliable the huddled masses are. The very people Jessica is trying to save don’t believe her, and then quickly fall under Kilgrave’s spell. Jessica’s life becomes a struggle to get anyone to believe that she was raped—all too familiar—while her abuser somehow charms everyone around her into smiling acquiescence. And recovering from the nightmares, addiction and isolation of post-traumatic stress, in “Jessica Jones,” is not an internal struggle, but a car-tossing, body-slamming conflict. Kilgrave alternates between seductive and deadly, and in his quest to get Jessica willingly back to his side—like most rapists, he denies having actually raped her, insisting she was into it on some level—he tries to worm his way under her skin in other ways, creating horrible dioramas for her to walk into and deal with. At one point, he reconstructs her childhood home; at another, he walks her into a restaurant where half the occupants have nooses around their necks. It’s a funhouse of horror; which is to say, it is the life of a trauma survivor.

The show is not perfect. There are subplots and minor characters that are invested in for unclear reasons; as wonderful as I typically find Carrie-Anne Moss, her role in the show is an irritating, time-consuming sideshow. “Jessica Jones” would probably have been better adapted in 10 episodes, or eight; given the closed-endedness of Bendis’ and Gaydos’ four-volume arc, it might have made a hell of a movie, too.

What makes it work is Ritter herself, who has too long been lurking in the shadows of other people’s shows. She’s playing a character carrying a lot of burdens, but she balances them with a hard-earned, delicate lightness. She is not above humor, or beauty, or faith; she is neither weak nor helpless. And she performs the most difficult feat of all, superpowered or no; she faces her own demons, as far down as they go, to find a way to be free of them. Suggesting that perhaps what is required for superheroes isn’t always strength; it’s vulnerability, too.