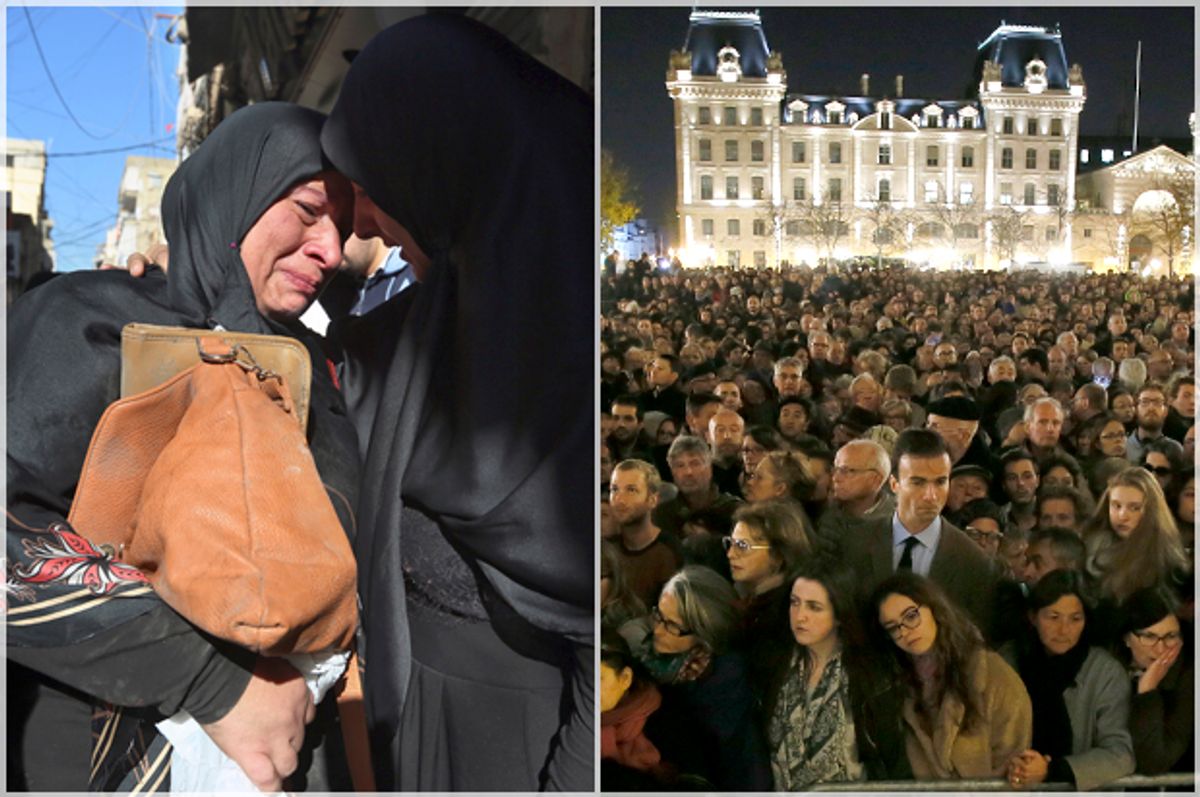 On November 12, the day before the attack on Paris, ISIS committed a horrific terrorist attack on innocent citizens of Beirut. Like the Paris attack, it was coordinated and commanded by ISIS. Like the Paris attack, it was executed by a cell of terrorist suicide bombers. Like in Paris, a manhunt ensued to find a network of planners and associates behind the bombers, and the Lebanese authorities have arrested nine people for suspected involvement in the attack. The two tragedies, one in Paris and the other in the largely French-speaking city once known as the "Paris of the Middle East," were remarkably similar. The most significant difference between the two attacks was the relative severity; the Beirut attack was far worse than the attack on Paris. Were the same proportion of the French population killed as in the Lebanon attack, Paris would have suffered 635 deaths. In fact, the attack exceeded the deadliness of 9/11 in terms of the proportion of citizens killed. The same magnitude of attack would have claimed almost 3,100 New Yorkers’ lives.

But according to news coverage in the West, those Lebanese lives effectively don’t matter. FAIR's Jim Naureckas points out the striking disparity in coverage in the New York Times, which was generally reflective of the wider news media's response. But it's not fair to only blame the press; the public appetite for Paris news seemed insatiable. Even those of us who consider ourselves enlightened and proudly attentive to uninterrogated biases--in which camp I like to include myself--couldn't help but be swept up in it, unwittingly revealing what really matters to us, whose lives we value. We say “Black Lives Matter” because black deaths at the hands of police don’t register in the national conscience to any degree commensurate to their tragic significance. The protest movement’s slogan is a dire appeal for black life to be valued as fully as white life is. In a country at whose founding black inhabitants were considered three-fifths of a person, if not simply animals, black citizens in 2015 still fight to be considered fully human.

But another dark dimension of the Black Lives Matter moment is the assumption that the dead deserve their fate. That’s made explicit in failures to indict or convict in the legal system and more implicit in the court of public opinion with the now-predictable conservative reaction of presenting posthumous evidence of the slain citizen’s moral failings or latent danger. That’s why a boyish photo of Trayvon Martin or Michael Brown is countered with a “scary”- and more “black”-looking visage from conservatives; the battle is to determine the character of the victim as much as the circumstances at the time of the killing. Wearing a hoodie or sagging pants--that is, the mere superficial participation in a culture--might become entered as evidence in the national popular litigation. Notions of generalized guilt can influence opinion as much as the matter of precise and particular guilt or innocence of the victim at the moment of his death. A preponderance of cultural guilt applied posthumously to the victim can make his innocence at the moment of his execution immaterial. Thankfully, Black Lives Matter has emerged to combat this vestige of the country’s original sin.

Similarly, a call of “Arab Lives Matter” should accompany the disregard for an attack like the one in Beirut. To casually ignore an attack 500 percent more deadly, per capita, than the Paris slaughter, committed by the very same organization, is racist, to be sure; but it’s also to imply that Lebanese victims deserve the violence in a way that the French don’t. Like an American black boy killed by police, the character of the Beirut neighborhood immediately became a battleground. The initial New York Times headline needlessly described the slaughter of innocents as occurring in a “Hezbollah Stronghold,” while those more concerned with maintaining the full humanity of the victims objected, eventually pushing the Times to alter its description. The Paper of Record reflexively assigned a certain guilt to the victims.

Meanwhile, after the Paris attack, the French were not similarly described as “Libya Invaders,” despite their primary role in the 2011 invasion, or as long and brutal colonizers of Muslim countries, or as the country that controlled Syria after the First World War. Because that would have been wrong; no Parisian victim deserved to die for her country’s thorough involvement in Muslim lands.

So while many recoil at Republican presidential candidates and GOP governors who leap to an assumption of guilt on the part of Syrian refugees, our collective obsession with the Paris attack signals a readiness to understand a certain naturalness to the attack in Beirut. We see it as something alien and foreign to Paris but something endemic to Lebanon, despite the Paris attackers being mostly (if not all) French and the Lebanese attackers being almost exclusively Syrians. But that’s where many start tacitly scrambling distinctions with abandon, imagining the French terrorists to be foreign and the Lebanese attackers to be natural to that environment. Our especial compassion only makes sense if we believe the victims in Paris being less deserving of the violence. The narrative of Islam-as-violent is at work in the rhetoric of Jeb Bush and Ted Cruz and Republican governors, but so too does it inform the way we’ve mourned Paris and forgotten Beirut.