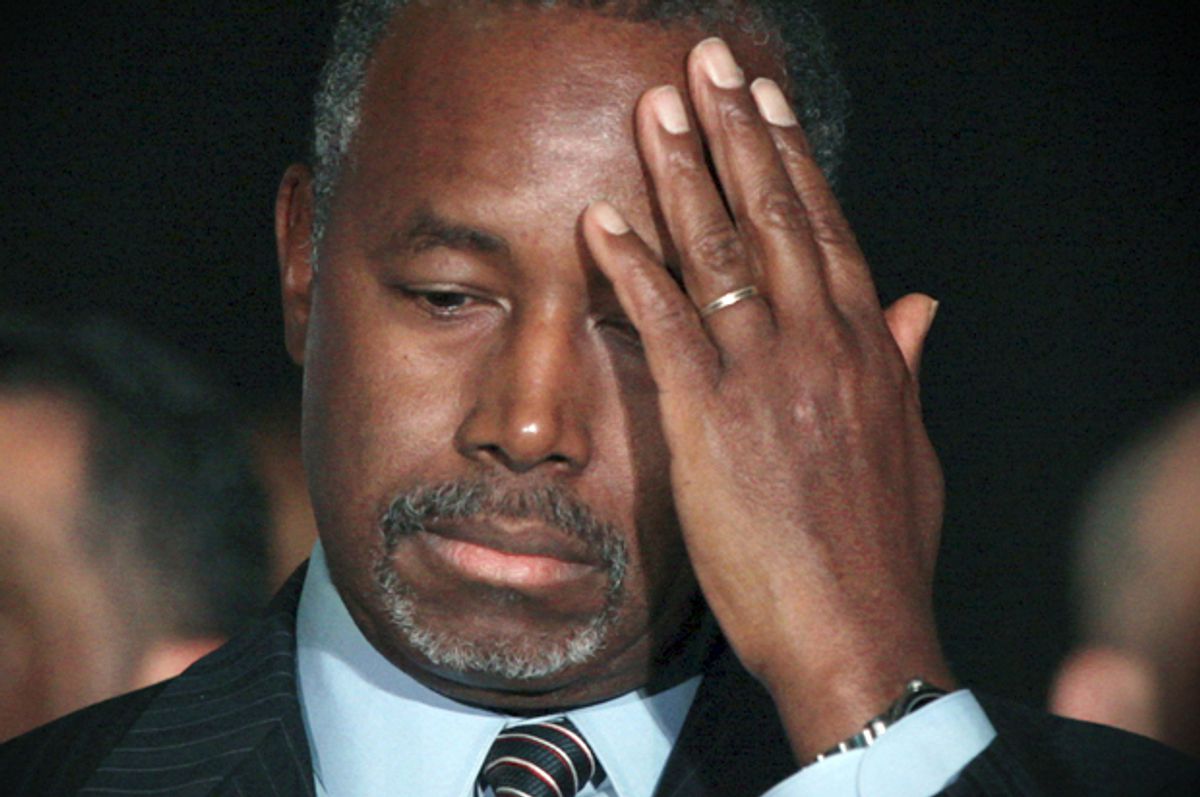 Ben Carson has had a great run. He has no experience, no knowledge of the issues, and no real inclination to learn the things he has to learn in order to run for office. In every debate so far, he’s embarrassed himself with meandering non-answers. Oftentimes it’s not clear Carson even understands the question he’s been asked, and that’s pretty much the case across topics.

Remarkably, none of that has mattered in this race. Carson has slithered his way to the top of the polls in recent months, and he appeared well-positioned at least until the Iowa caucuses. Carson’s only real competition thus far has been Trump. And the leading “establishment” candidate at this point is Rubio, who remains roughly seven points behind Carson in most of the polls.

But things have changed.

It appears the recent terrorist attacks in Paris have awakened GOP primary voters from their slumber – well, sort of. And that’s bad news for Carson, who just had one of his worst weeks as a presidential candidate. In case you missed it, Carson stumbled last week when he mistakenly claimed that China was militarily involved in Syria. He then failed to name the nations he would ask to join a coalition against ISIS.

Things spiraled further out of control for the retired neurosurgeon when his own foreign policy adviser questioned his understanding of and interest in the issues. “Nobody has been able to sit down with him and have him get one iota of information about the Middle East,” said Duane R. Clarridge, a chief adviser to Carson’s campaign. Clarridge added that “Mr. Carson needed weekly conference calls briefing him on foreign policy so ‘we can make him smart.'’’

Even in a party that devalues experience and champions know-nothingism, this is a potential death knell for Carson’s campaign.

The attacks in Paris, for better or worse, have pushed national security and foreign policy to the top of the Republican agenda. Discussions about ISIS and Syria and Iraq will dominate the debate for the foreseeable future. Carson sounds like a fatuous gasbag on virtually all topics save for neuroscience, but he’s especially bad on foreign policy.

And his numbers are starting to reflect that.

A NBC poll released last week shows that Trump has solidified his frontrunner spot in the wake of Paris, mostly because of his openly fascistic calls to surveil Mosques, reinstate waterboarding, and register all Muslims in a “database.” Carson, however, who was tied with Trump as recently as two weeks ago, has dropped 8 points and is now tied with Ted Cruz at 18 percent.

Thinks look worse for Carson in Iowa, where his evangelical base is most concentrated. A report by Politico over the weekend confirms that Carson is in trouble. The terror attacks have changed the conversation, and Carson is the obvious loser. “He’s a great guy, he’s fun to listen to, but I didn’t hear anything substantive,” said one Iowa-based GOP voter, who now ranks national security as an “extremely high” priority.

Another Iowa Republican said recent events have caused her to pivot from Carson to Cruz. “’He [Cruz] has experience, he’s shown what he can do. With the state of affairs we’re in right now, I think it is very important. It’s vital…We need someone who knows the ropes, who’s not the establishment but who doesn’t need on-the-job-training.”

Even Steve King, a prominent Iowa conservative who endorsed Cruz last week, has echoed this theme:

“They’ll often say, all politics are local, politics are domestic, domestic politics will elect the next president. I’m not sure that’s right. Not when you see the pictures of the bodies in places like Paris and around the world…When we see that…that makes a candidate that’s strong on foreign policy, strong on national defense…that makes that candidate stronger. Being [from] outside the Beltway doesn’t help with that. Being inside the Beltway, as long as you’re not ruled by that, I think does help.”

Carson’s downward slide is likely to continue in the coming weeks. He doesn’t know what he’s talking about, and it’s too late to pretend otherwise. Unlike Trump, who at least has an obnoxious but successful tough guy shtick, Carson’s nice guy routine won’t play well in this political climate.

All of this is great news for Ted Cruz. Cruz doesn’t have any meaningful foreign policy experience, but he is an active U.S. Senator and, more importantly, he’s quite good at sounding like he knows what he’s talking about. His rhetorical gifts will serve him well in this debate. Cruz can pander to Christians as well or better than Carson, and he knows it. Having some actual experience as a politician will make him far more appealing to conservatives in Iowa and elsewhere who want their foreign policy bravado served with a dash of religious lunacy.

As it happens, this is Cruz’s specialty.