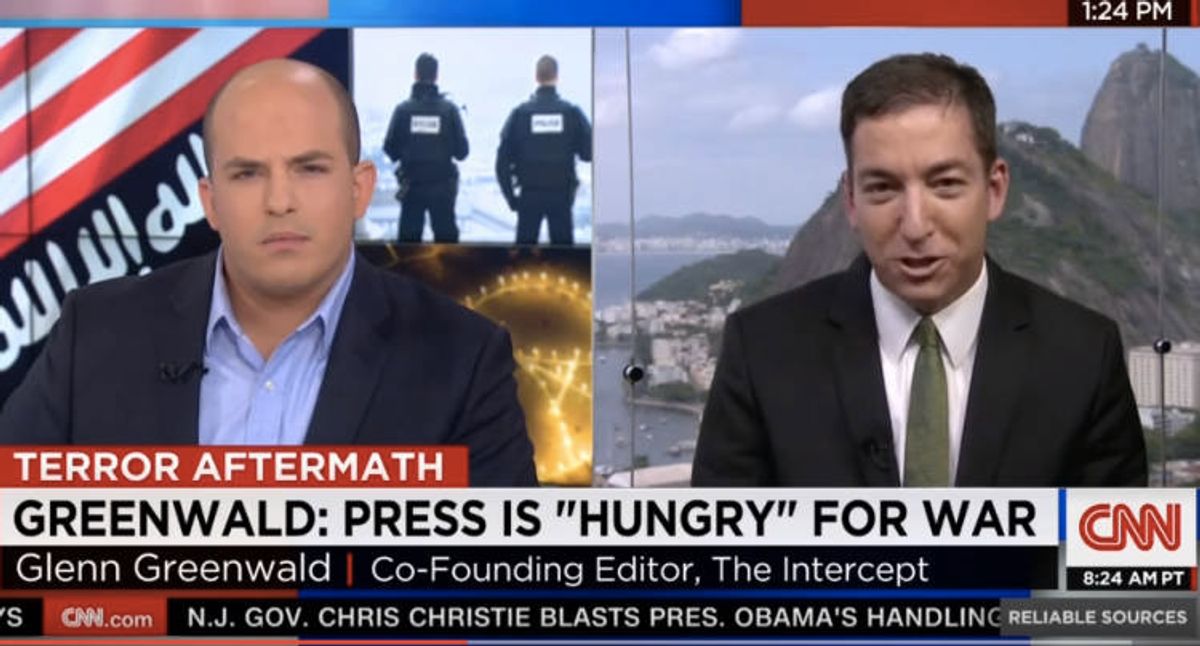 The week before Thanksgiving saw some of the most overtly xenophobic, militaristic and fact-free media proclamations since the weeks in the lead up to the 2003 invasion of Iraq and Glen Greenwald appeared on CNN over the weekend to call out the cable news network for its role leading the beat of war drums.

"Reliable Sources" host Brian Stelter asked Greenwald how he backs up his assertion that "the press is hungry for war" in the wake of the Paris attacks. In an article criticizing CNN's post-Paris attack coverage, Greenwald said "CNN has basically become state TV."

"The lesson that the American media has supposedly learned after the 9/11 attack," Greenwald began, "was that allowing political and military intelligence officials to make all kinds of claims without scrutinizing and questioning and pushing them back is a really destructive thing to do."

"It propagandizes the population," he argued. "It leads to things like torture, Guantanamo, the attack on Iraq based on false pretenses."

"I think that CNN has actually unfortunately led the way in this," Greenwald bluntly stated about the network's coverage following the terror attacks in Paris.

"I think the worst example, probably the most despicable interview we've seen in the last several years were two CNN anchors, John Vause and Isha Sesay, who told a French Muslim political activist that he and all other Muslims bear, quote, 'responsibility' for the attack in Paris because all Muslims must somehow be responsible," Greenwald explained. In that interview, both anchors confronted their Muslim guest about a collective Muslim “responsibility” in the wake of the terror attacks.

Stelter pushed back, suggesting that Greenwald might be "cherry-picking" an example to prove a point, but Greenwald had quite the reel of CNN tape to wind back for Stelter.

Greenwald mentioned a former CIA head's unchallenged statement that Edward Snowden deserved to be hung during an interview with CNN's Brooke Baldwin; CNN reporter, Jim Acosta's, G20 press conference question to President Obama pushing for a war with "these bastards"; CIA chief John Brennan's repeated false claims on CNN that the terror attacks were planned through encrypted techniques as a result of Snowden's NSA leaks; and what Greenwald described as Christiane Amanpour's repeated on-air demands that President Obama send ground troops into Syria.

"I think what Jim did is totally appropriate," Greenwald told Stelter. "I think it's great that Christiane Amanpour can go on CNN all the time and ... expresses whatever opinions she wants. That to me is journalism, is criticizing politicians."

"That's why Elise Labott did nothing wrong as well," Greenwald said, contrasting the network's treatment of its global affairs correspondent, suspended for tweeting her disapproval of the House vote to severely limit the number of Syrian refugees relocated to the U.S. last week.

"The fact that CNN singled her out and punished her doesn't show the objectivity as required of CNN reporters. It shows that when you want more war, when you want to stigmatize Muslims, but defending Muslims is not allowed. I think that's what signals it sent."

Watch Greenwald call out CNN on CNN below: