It's time to cancel "Oscar season": Why no one is going to see this year’s big contenders 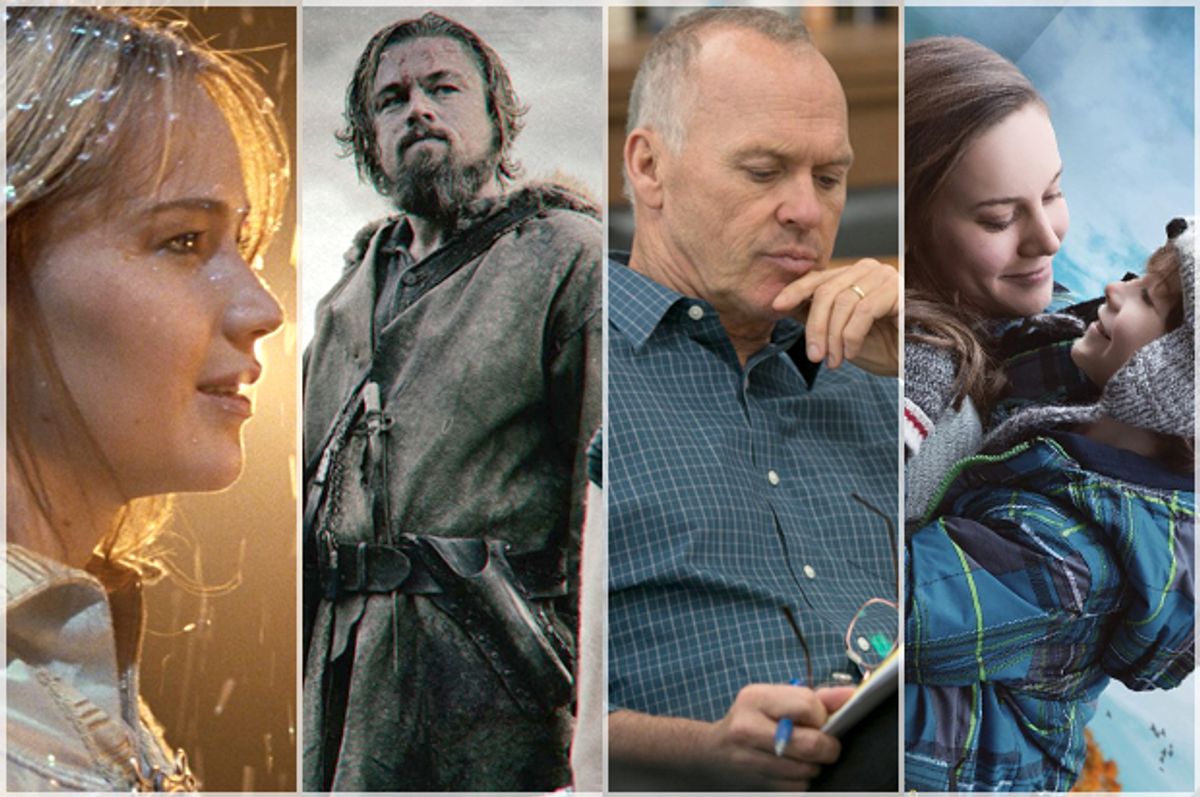 It might not seem like movies like "The Walk," "Beasts of No Nation," "Steve Jobs," "Our Brand Is Crisis" and "Freeheld" have much in common and they don’t—besides the fact that almost no one has seen them. These October releases all bombed at the box office, earning a combined $34.4 million in theaters (at the time of writing). For reference, that’s roughly what "The Maze Runner" and "Gone Girl" made in their opening weekends—and less than what that godawful "Minions" movie earned in a single day.

These films were all positioned to be players in this year’s Oscar race, released during the same month that birthed the last three best pictures—"Argo," "12 Years a Slave" and "Birdman," the reigning champ. Given October’s recent success at crowning winners, this past month’s crop was absurdly stacked, with fare like "Bridge of Spies," "The Assassin," "Victoria," "The Martian," "Suffragette," "Room," "Truth" and "I Smile Back" all hoping for an awards season boost through association. In addition to all the other movies that came out in October, they had to compete with September releases like "Sicario" and "Black Mass," as well as November’s packed lineup—which includes "Carol," "Spotlight," "The Danish Girl" and "Brooklyn."

Not all of those movies were flops ("The Martian" just crossed $200 million and "Bridge of Spies" is proving a sleeper hit), but it’s incredibly difficult for prestige pictures to stand out in a crowded autumn. After all, moviegoers only have so much time and money to spend at the cinema, and rather than trying to see everything, they’re likely to hold out for sure bets (pairing Spielberg and Tom Hanks is literally the safest thing imaginable) or skip the awards season lineup altogether. And who can blame them? It’s ridiculous to think that audiences only want to see intelligent, well-made movies once a year, and that system is clearly failing moviegoers. Hollywood needs to kill Oscar season once and for all.

For those unfamiliar, the definition of what “Oscar season” is varies—but it usually begins between mid-to-late September and early October and ends on Dec. 31. And Since 1978, a whopping 82 percent of best picture winners came out during this time; historically, a majority of nominees are released in December, while November has boasted the most best pictures (early front-runner "Spotlight" looks to continue that trend in 2015). February has enjoyed the fewest nominees overall, while no July release has ever won the academy’s biggest prize. Instead, studios reserve July for exploding robots and superheroes fighting space evil, while February acts as dump month—a time when Hollywood throws its most misbegotten misfires out into the cold.

But it doesn’t have to be this way. While studios have always saved their awards hopefuls for the months leading up to the late February ceremony, 1942 proved that doesn’t have to be the case. The year that crowned "Mrs. Miniver" saw not a single of its 10 nominees released during the fall, and in the early to mid '90s, a string of winners bucked conventional Oscar wisdom: "Braveheart" was a May release, "Unforgiven" came out in August, "Forrest Gump" debuted in July (clarification: the film opened in limited release in June, and went into wide release in July), and "Silence of the Lambs" impressively carried its buzz all the way from the previous February (aka an entire year). More recently, "The Hurt Locker" and "Crash" both took top honors despite coming out in August and May, respectively. And when it won best picture in 2006, "Crash" had been on DVD (hey, remember those?) for six whole months.

Studios themselves have witnessed the financial benefits that can be reaped by tinkering with release dates. After Vulture’s Kyle Buchanan famously declared the 2013 Oscar race over when "12 Years a Slave" took the coveted audience award at the Toronto International Film Festival, Warner Bros. swiftly moved "The Great Gatsby" from Christmas to May. As a Yuletide release, the movie would have been primarily judged on its awards season merits, which were seriously lacking, than its box office potential, which was enormous; it did have Leonardo DiCaprio in it, after all. The gamble paid off: As counterprogramming for adult audiences who weren’t interested in another "Iron Man" movie, "The Great Gatsby" cleaned up—earning a robust $351 million worldwide.

Martin Scorsese had similar success with "Shutter Island" in 2010. Scorsese’s first narrative feature following "The Departed" was immediately pegged as a major Oscar contender following its announced October release date. When it was suddenly pushed to February, industry sites like Deadline labeled the move a “shocker”—a tacit admission that the movie must be a disaster. However, that wasn’t the case: Instead of getting lost in the "Avatar" vs. "The Hurt Locker" saga, "Shutter Island" gave audiences hungry for quality(-ish) entertainment something to chew on during dump month. It became one of the biggest February releases in history, as well as Martin Scorsese’s second highest-grossing movie ever. Not bad for a movie that was OK at best.

In the past years, distributors have begun to toy with the releasing schedule by releasing riskier mainstream fare in February—well outside of summer blockbuster season. 2013’s "The Lego Movie" was a punch line until it became a critical and box office darling, and this February’s "Deadpool" and the long-awaited "Zoolander" sequel hope to replicate that success. The prolific Coen brothers’ forthcoming "Hail Caesar" may prove Oscar contenders can follow that lead. Starring AMPAS voter favorites like George Clooney, Tilda Swinton,  Jonah Hill, Ralph Fiennes and Josh Brolin, the film should have been released during the height of awards season, as it’s a surefire contender on paper. "Hail Caesar" is a movie about movies, and recent showbiz-centric winners like "Argo" and "The Artist" remind us that Hollywood loves nothing more than itself.

If two beloved auteurs help show Oscar voters the winter light, it’ll be long overdue. With the rise of at-home viewing options like Hulu and Amazon Prime, the ways in which audiences consume entertainment is changing, and outdated releasing strategies simply don’t work in a 24/7 media market. TV studios have begun to recognize this following Netflix’s enormous success with debuting "House of Cards" and "Orange Is the New Black" outside of traditional pilot season (their premieres launched in February and July, respectively). In 2013, Fox’s former chairman of entertainment, Kevin Reilly, announced that the channel would be putting an end to fall pilot season. Since then, broadcast networks have begun slowly to look more like cable, where new programs kickoff all year round.

While Fox has yet to fully make good on that promise (freshman shows like "Scream Queens" and "Minority Report" dropped right on the customary schedule), Reilly’s  warnings about the perils of an “insane” releasing system offer an important message both for TV and film executives. With more entertainment options than ever before, it’s not enough to build and hope people will come. You have to make sure that people have the incentive to show up. Even as a devoted Oscar die-hard, I’m dreading the onslaught of this year’s race. It’s only November, and I’m already light-years behind on fall movies, while still trying to circle back on everything I missed earlier in the year (see: "The End of the Tour," "Love & Mercy"). And I’m far from the average moviegoer—I see 2-3 movies in theaters a week.

When even the obsessives feel tapped out, no wonder everything is flopping—it’s easier for casual moviegoers to stay home and save the $10. After all, “Netflix and Chill” sounds a lot better than “Oscars and Spent.”