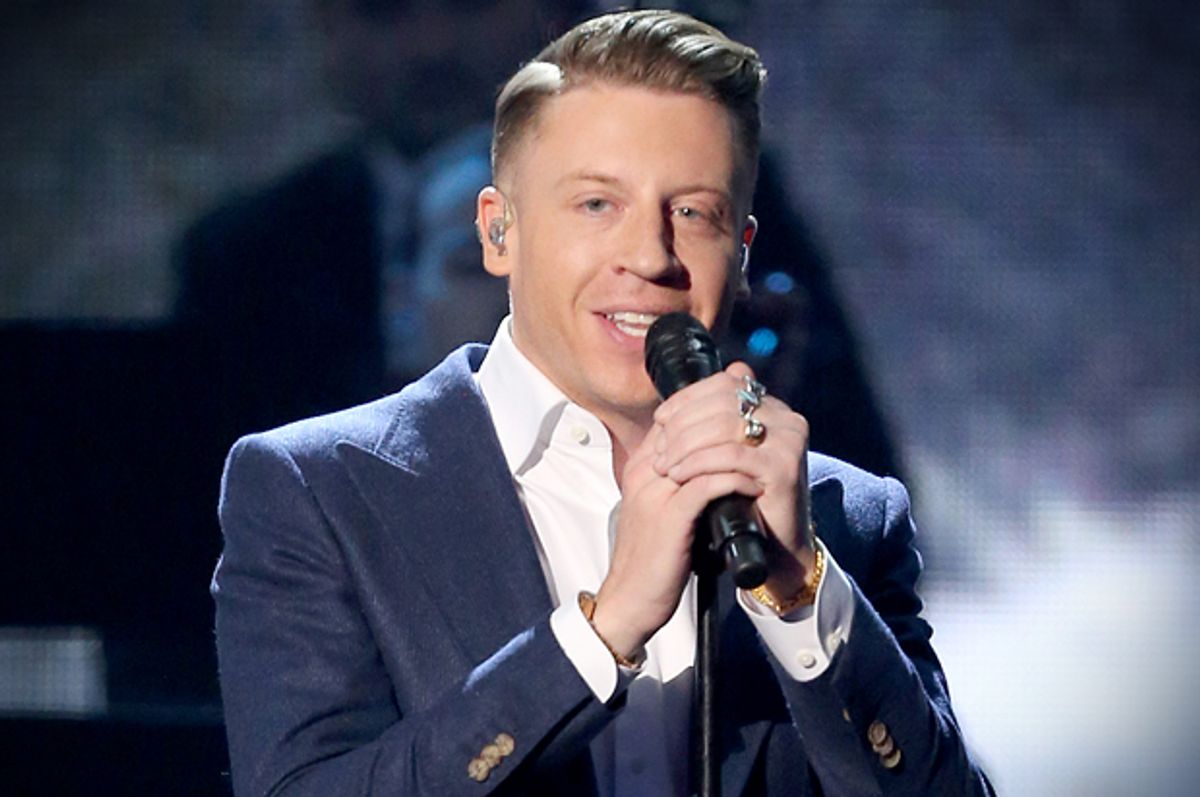 Whether gleefully jumping through a thrift shop in a furry and fringe-y duds or gleefully boasting about buying a moped (the dude doesn’t have a lot of emotional range) the Seattle rapper Macklemore has generated major hits, Grammys (“The Heist” was deemed best rap album) as well as considerable eye-rolling. He’s big enough that he was asked to perform at the American Music Awards Sunday night, complete with gospel choir.

Why do people hate a guy who seems personally and politically inoffensive? Part of it, of course, is race. It’s natural that white people working in a black musical style would draw criticism, especially in an age so dominated by issues of identity. But Mick Jagger, Eminem, Amy Winehouse, and a number of white jazz musicians managed to evade the skeptics by making great music.

The opposition to the fair-haired Seattle native both Ben Haggerty – who performs with a series of sidemen, including Ryan Lewis -- goes beyond his being Caucasian. A Slate piece from last year said we shouldn’t hate him because he’s white. And then goes on:

No, I hate Macklemore and Ryan Lewis because I think their music is terrible at best, and worse than terrible at worst. It’s the lowest sort of middlebrow, an art-like commodity that shallow people think is deep and dull people think is edgy. The city that blessed us with Jimi Hendrix and Nirvana has now cursed us with the rap game Upworthy: a man hawking hip-hop that switches out faked emotion for real intellect and faked intellect for real emotion and has no discernible goals other than to congratulate its makers for making it and its listeners for purchasing it.

The dissing-Macklemore contingent got forceful enough that there’s now a backlash to the backlash. In September, the LA Weekly ran a piece called “Why It’s Time For Everyone to Quit Hating on Macklemore.” But I’m ready to say: His new song, “Kevin,” is a reminder of why the guy is so annoying.

“Kevin,” which he performs with soul singer Leon Bridges, is about the scourge of prescription drugs in Middle America. It's an important issue, and one that the journalist Sam Quinones, among others, has tackled. A better musician could do something smart with the subject. Macklemore has been outspoken about his history with drug addiction, so surely this is a personal project for him — and yet the result is surprisingly generic. "Kevin" doesn’t take the topic anywhere new or interesting.

“Doctor, Please give me a dose of the American dream,” Bridges sings. “Put down the pen and look in my eyes/ We’re in the waiting room and something ain’t right/ All this is on you, we’re overprescribed.” Macklemore follows with a verse including the line, “I blame the pharmacy companies.”

I don’t doubt the guy is sincere, but these lyrics don’t exactly bring the issue to life. To be fair, they’re not any worse than the lyrics to “Downtown,” which begin, “I went to the moped store, said, ‘F*ck it.’/ Salesman's like ‘What up, what's your budget?’" But that's a moped purchase, not a Very Serious Topic we're supposed to be moved to care about after hearing this song.

It’s not that singing about serious things is always a problem. Rap has a long and deep lineage of political and social consciousness. But the social consciousness of Macklemore, this song included, feels phony, obvious, and safe. Is there really anyone in favor of overprescribed medication? He’s taken a hard stand on a pretty easy issue.

Macklemore’s rapping seems to lack something as well. What is it? Authority? Flow? Rhythmic imagination? Whatever it is that makes rapping memorable and distinctive -- that makes it feel like the artist is playing with the syllables in a fresh, non-obvious way, the way a jazz soloist does -- he doesn’t have it. He just sings his lines in this kind of thudding way.

Did Macklemore have the talent to be an Eminem, a Lupe Fiasco, a Kendrick Lamar or a Chuck D? Apparently not, but he’s got serious influences – Freestyle Fellowship, Wu-Tang, and so on. He clearly wants to be more than another rich white guy who raps, but he seems to embody the worst of both worlds of Vanilla Ice and Bono. The marketplace, clearly, can use someone there — but musically and culturally, it’s not a great place to be.