My abortion was easy. The hatred and shaming that followed landed me upside down in a ditch 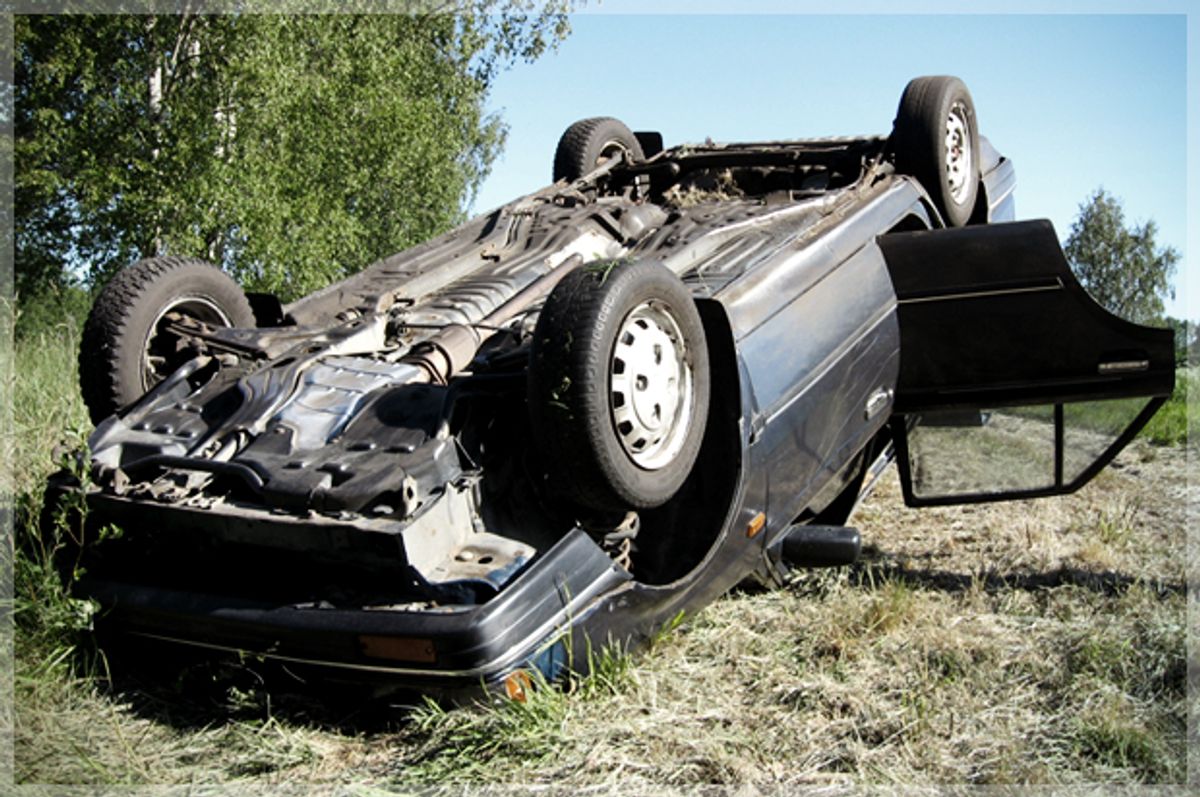 I had found myself accidentally pregnant thanks to my inability to take birth control pills on an even semi-regular basis. My relationship was beginning to crumble, but I was stubborn and hopeful that one day we could restore its foundation. At that point in my life, I had never thought of children. My boyfriend didn’t want them with me, and we both agreed that we weren’t ready to be parents. Both of us, while refusing to admit it, knew we weren’t going to be an “us” for much longer. When I found myself pregnant, the prospect of an abortion seemed a manifestation of the relationship itself; it would be the termination of something that never should have existed.

And yet, I had a relatively difficult time deciding to have the procedure. Although I knew it was the right decision, I couldn’t protect myself from the stigma attached to abortion, to the idea that there was something inherently bad or wrong with the women who had them. My then-boyfriend didn’t have to worry about the implications, although the decision was as much his as it was mine. We had both discussed options and we both knew what was best, but he would be free from the blemishes I knew society would paint me with the moment I made that phone call. After all, even though it was the two of us making the choice, I was the only one who actually had to have the procedure. The rational part of me knew I was making the right decision, but the socially conscious part of me felt dirty and broken and tainted just mentioning the word. I wasn’t afraid of the abortion. I was afraid that as soon as it was over, I would be the girl who had an abortion.

Still, I scheduled the appointment. I walked into my local Planned Parenthood, received the most amazing and professional care by some of the most supportive, understanding and genuinely warm women I’ve ever met. I was asked repeatedly if I was there of my own volition. I was given a hand to hold throughout the procedure, a nurse giving me permission to squeeze when the cramping became uncomfortable. I was given information and the contacts of numerous support groups and as much time as I needed to recover before leaving. In other words, I was given a safe and comfortable environment to do what I knew was best for myself, best for then-boyfriend, and best for our impending -- and soon-to-be separate -- futures.

And then I walked outside.

In the bubble of a calm and understanding environment, in which the decisions I make with my body were respected and facilitated, I felt at ease with a choice I knew was right. But once I left that bubble, a society that forces women to feel shame and humiliation about an otherwise common procedure took its toll.

Friends would share memes and photos and hate-filled posts online, oblivious to my personal situation, claiming women who had abortions were everything I knew I wasn’t. Debates would rage on Facebook between acquaintances who felt powerful and courageous behind the protection of a computer screen, unaware of the particulars of their friends’ lives. While all of these debates were regurgitated, manufactured propaganda used to push a specific agenda, they still had a powerful effect on me. I started to believe what unknowing friends and family were saying or sharing.

I was a murderer.

I was a whore.

I was a selfish, sex-crazed monster who didn’t deserve to continue living.

I was in need of constant repentance if I was to be worthy of worthwhile life.

And in almost no time at all, I was lost.

I had broken under the immense pressure. I had seen enough pro-life friends call women who had abortions murderers, oblivious to the fact that I had just had one. I had read enough stories of regret and guilt that I started to feel defective for not feeling the same. Enough of my friends who were privy to my medical information told me they’d pray for me and admitted that they had cried for me, solidifying my feeling of brokenness and darkness because now, I was someone who needed to be prayed and cried for.

I had a friend share her mother's decision to keep her unwanted and unplanned pregnancy, and the result was a thriving and successful individual. I remember her tipping her head slightly to the side, raising her eyebrows and telling me that she knew I could have done it if I had only had the courage. With each word she spoke, each expression of disappointment, my peace of mind crumbled. I started to demean myself in the same way others were demeaning me, comparing my decision to the decisions made by others, completely circumventing my very real and very valid circumstances.

I had bought into the idea that if I was to continue to claim to be a “good woman,” I had to hate myself for the decision I had made.

And when it came to hating myself, I was a professional.

I popped pills like they were skittles, slumping into the leather of the oversize couch my ex-boyfriend and I used to share, refusing to move for an untold number of hours. He had moved out of our condo and I was left behind, picking up the pieces and sinking into the floorboards as the shame of our decision weighed on me. I’d watch as time blurred past me, living in the space between consciousness and unconsciousness, where a comforting numbness removes all remnants of perception. I was made to feel like my reaction to the abortion was wrong and cruel and cold, so I actively tried to feel nothing at all. I was able to keep my job as an office worker at a beer and wine distributor, but I'd show up late or drunk or both. I'd try to appear normal and go out for lunch with co-workers, only to throw up my lunch in the office bathroom because I didn't feel like I even deserved food. I was falling behind in my post-graduate teaching program, pulling over on the side of the road to throw up before entering a middle school classroom. Shots and pints and doubles were consumed with reckless abandon, so hangovers became as common as morning coffee. I’d mix a shot of Jack Daniel's with a Vicodin, waiting for unconsciousness to take me outside of myself.

Every self-destructive habit I thought I left behind in college came roaring back to life: My days were a blur of angst and self-loathing.

After a night of complete overindulgence, I drove home, lost control on a dirt road and flipped my car. I woke up completely upside down, held together and alive only because I had decided to wear my seatbelt. I had a concussion, bruised ribs and a gash across my chest, but none of it compared to crushing disappointment I felt when climbing out of my driver’s side window. I was alive, but it didn’t feel like I was supposed to be.

I was actively trying to kill myself with indifference and self-hatred in an effort to prove I was actually worthy of the life I still had. It wasn’t until I was confronted by a best friend and forced to seek the treatment of a therapist that I realized what I was doing to myself was as unnecessary as it was conditioned.

While abortion has been legal in the United States for decades, it has not yet shed its stigma. Back alleys are now comment sections, Facebook posts and 140-character tweets. Coat hangers are now malicious words, bent and manipulated with the complete intention of causing a woman harm.

Abortions, when offered in safe and clean environment like Planned Parenthood, won’t kill women, but the stigma and hatred -- perpetuated by a group of individuals who claim to be pro-life -- can and do.

And I was dangerously close to being one of those women.

Thankfully, I had access to a psychologist who reminded me that the decision I made was not bad or wrong or morally disgusting. She told me that while it wasn't socially accepted, my abortion was one of the only healthy decisions I had made for myself in months, perhaps even years. She told me that I’d taken control of a situation that had me headed toward a life of unhappiness and unhealthiness, that taking control of your own life and reproduction is nothing to be ashamed of. I will forever be thankful that I was able to step into a safe room with an understanding professional and realize I didn’t have to cater to the stigma abortion carries. Thankfully, for every voice that called me a murderer or a sinner, I had a supportive friend with a louder voice, telling me I am the only one who knows what is best for my body, and my future.

Thankfully, movements like #ShoutYourAbortion are changing the social discourse surrounding abortion and women’s reproductive rights, so the girl sitting on her leather couch right now, popping pills and drinking and hating herself because people in a judgmental society tell her she should, realizes she doesn’t have to at all.

So to her, and women everywhere: having an abortion does not make you a whore or a murderer or a broken woman. The judgment of people who don’t know you does not determine your worth. You do.