Ted Cruz has a Donald Trump problem: He's waiting for a Trump collapse that may never happen

Ted Cruz allied himself with Trump assuming he would eventually collapse, but Trump's shown remarkable reslience 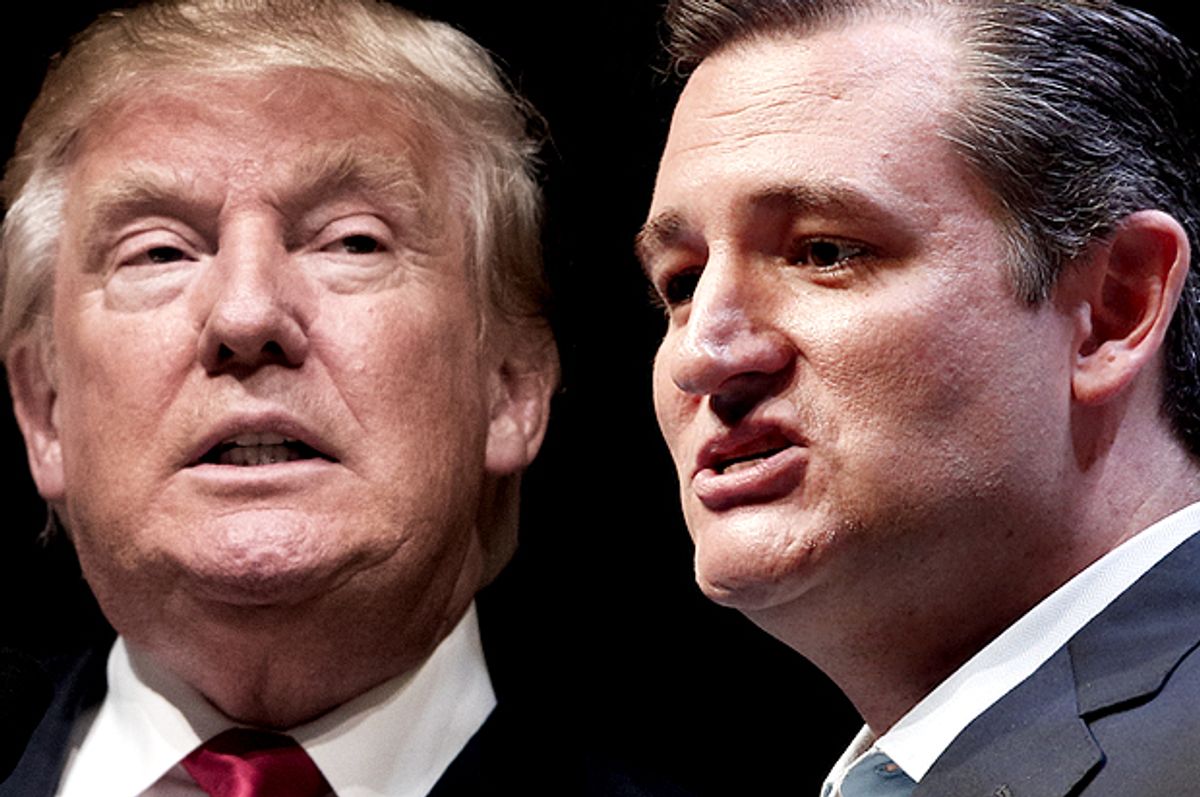 We still have not reached the Donald Trump inflection point. Since he first descended that ridiculous escalator way the hell back in June, the prevailing theory about Trump 2016 has been that he’d spike owing to name recognition, and then collapse under the impossible weight of his own outlandish ignorance. Trump spiked, but collapse just won’t happen, and that’s in spite of Trump’s best efforts to make himself politically radioactive.

It’s too much work at this point to create a comprehensive list of the Trump utterances that would have sunk any other politician, so for the time being we’ll just focus on his reaction to the Paris terrorist attacks, which really brought out the authoritarian strongman inside the Republican front-runner. Trump is capitalizing on the growing anxiety over terrorism by recommending that mosques in American be put under surveillance and shut down if “bad things are happening” there. He’s shown some legitimately disgusting openness to the idea of creating a registry of Muslims within the country.

Comments and policies like these deserve nothing but strong and unequivocal condemnation, and Trump is getting a lot of that. But not from everyone. Ted Cruz, Trump’s competitor for the Republican presidential nomination, offered the gentlest of disagreements when asked about Trump’s Muslim registry flirtation, saying he’s “a big fan of Donald Trump’s, but I’m not a fan of government registries.” Then he knuckle-rapped the media for trying to sow discord in the GOP field. “I recognize that the media would love to get me and other candidates to attack Donald Trump,” he said, “There may be other candidates who want to do that. I ain’t gonna do it.”

Of course Cruz ain’t gonna do it. He’s been loudly refusing to criticize Trump for months now. Even as he rips into Marco Rubio over immigration and questions his Senate colleague’s conservative bona fides, Cruz won’t say a bad word about the GOP 2016 front-runner. Instead, Cruz is nothing but smiles and sunshine toward Trump – he even hit the campaign trail with Trump in August, inviting him to appear at a rally in D.C. opposing the nuclear deal with Iran.

The reason for all this bonhomie is that Cruz is also a firm believer in the as-yet-unobserved Trump inflection point, and he wants to scoop up the leavings of Trump 2016 when the theoretical collapse occurs. “The Cruz camp is confident that Trump’s candidacy will have a natural arc, that eventually political gravity will pull his numbers down,” National Journal reported in August, “and that when it happens, Cruz will be ideally positioned to absorb his current supporters.” Until that happens, Cruz is happy to have Trump as an ally, especially since Trump has proven skilled at beating down other GOP 2016 contenders with an unceasing deluge of insults.

The problem for Cruz is that he may have miscalculated the Republican base’s bottomless appetite for Trump’s proprietary brand of xenophobic trash wrapped up in glitzy packaging. The “natural arc” they believe exists has thus far not manifested itself – Trump’s been bouncing up and down a bit in national polls since his early September peak, but he’s never dipped below 20 percent in the averages. And he looks to have survived a challenge from Ben Carson, whose numbers briefly rose to Trump’s level but are now on the decline. If Trump’s support remains this durable, what does Cruz do?

He can’t very well start attacking Trump, given the degree to which he’s defended him – or at least declined to criticize him – up to this point. How can you offer yourself as a credible critic of the front-runner if you’ve previously given him a pass on creating a national registry of Muslims? Also, the whole point in flattering Trump was to signal to his supporters that Cruz is on their side and, when the time comes, the natural inheritor of their adulation. If he flips to criticizing Trump, he’ll stomp all over the image he worked to cultivate. And Cruz has to know that direct attacks on Trump come with substantial risk, as Rand Paul and Jeb Bush learned the hard way.

And it’s extraordinarily difficult to out-Trump Trump. The pattern of the Republican primary thus far has been candidates inching further rightward to better align themselves with the markers Trump lays down. No one can replicate Trump’s bizarre cocktail of batshit policy extremism, raw xenophobia, and self-indulgent preening that the Republican base finds so appealing. They just have to patiently wait for voters to get sick of it.

It’s certainly possible that Trump’s dalliances with Muslims registries and the like – which he’s now distancing himself from – could provide that long sought-after inflection point. But, of course, the same thing was said about pretty much every other shockingly stupid utterance he’s made. If voters don’t abandon Trump soon, however, Cruz will find that he’s handcuffed himself. He’s in a position where he has to hope that the rumored Trump collapse actually comes to pass, but because he’s aligned himself so closely with Trump, he can’t do anything to help that collapse along.