Anne-Marie Slaughter says Princeton should take students seriously on Woodrow Wilson: "This is about that sense that we are watching black teenagers be shot in cold blood" 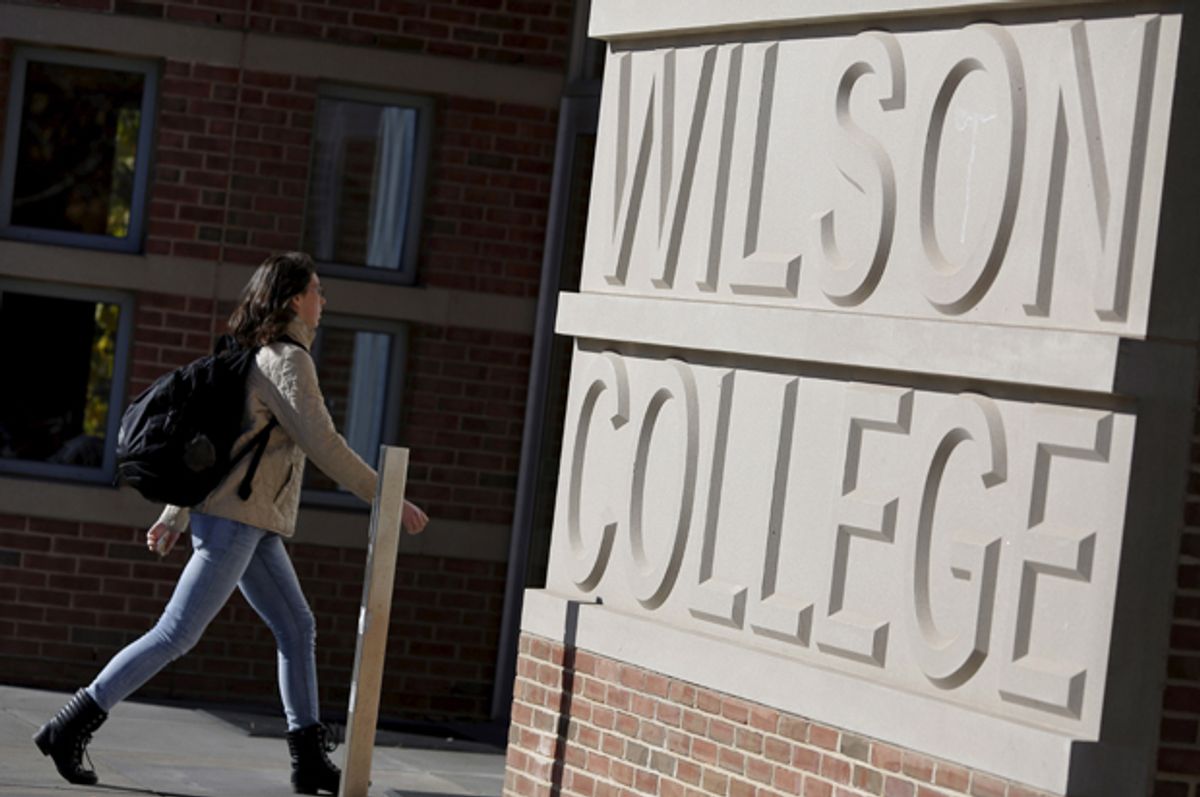 The issue of race and campus protests has been polarizing, with traditionalists and protesters locked in an angry fight with little understanding of the other’s point of view. But Anne-Marie Slaughter – former state department official and current president of New America – argues that not only is the issue complicated, it can only be discussed if everyone sees its full complexity. Earlier this week, she wrote a thought-provoking Facebook post on the issue of race on campus in general and the controversy over Woodrow Wilson at Princeton specifically. (Students and others have argued that his name be scrubbed from the university he once ran because of his racism.)

Slaughter – a one-time dean of Princeton’s Woodrow Wilson School, thinks that erasing Wilson’s name would be “a grave mistake,” since “the good that Woodrow Wilson did, even fully recognizing his racism, his sexism, and indeed the overall rigidity and self-righteousness make him simply unlikable in so many ways, greatly outweighs the bad.” Her hometown, Charlottesville, VA, has had to come to terms, she points out, with Thomas Jefferson’s radically divided soul through honest, not erasure.

But a reading of Te-Nehisi Coates’s “Between the World and Me” and its antecedent, James Baldwin’s “The Fire Next Time” had led her to understand and recognize the point of view of many students of color: That more decisive action may be necessary. “When Princeton President Christopher Eisgruber announced this past week that he was launching a process to consider demands by protesting Princeton students to remove Wilson’s name from the Wilson School, I initially thought it was a crazy decision. But on reflection, it is the only decision that is consistent with Princeton’s values. Princeton’s administration, faculty, alumni and current students should welcome this debate on open and honest terms, without a predetermined outcome.”

We spoke to Slaughter about race, the burden of the past, and campus politics. The interview has been lightly edited for clarity.

Your original position was that we shouldn’t just strip the names of racists off buildings – that it’s a shallow way to operate.

Six years ago, as dean of the Wilson school – I stepped down in 2009 -- I would have said, “Oh, come on – you’ve got to be kidding me. We’re not going to change the name of the Wilson school! You can’t do that! The man is responsible for the school, he conceived of the school… In the context of Princeton, he stands for Princeton in the nation’s service.”

What’s changed for me is I would have been in the camp – as many alums are – that says, “We can talk about racism at Princeton, but we’re not changing the name, that’s not even on the table.”

And now I think that’s not right. What’s going on here is something much deeper. It’s why I tie it to Ta-Nehisi Coates’s book and James Baldwin – being rendered invisible… I looked at that Yale student screaming… This is not about reason; it’s first about emotion. Only people who’ve not been seen or heard can fully understand the vehemence of the emotion that that triggers. And as a woman who’s had that happen with me, by men, I’m sympathetic. So my point is about the debate as much as about the result.

You’ve emphasized that the goal of liberal education is to challenge yourself, to grow… And your point of view on this has really changed.

Yes – my view on lots of things.

So you no longer think it makes sense to look at the controversies around figures, to acknowledge their sins, but keep their presence intact.

The role of a critical education is to lead us to question and challenge… That it’s the students who are forcing Princeton’s alumni association to question and challenge their own beliefs… It doesn’t just run one way. You can’t just say to students that “This is more complex than you realize – he wasn’t just a racist, he was a great man.” You can’t just run the other way, and say to alumni, “He wasn’t a great man who was a racist on the side. He was a man who stands for the denial of our equal intelligence and our right to be here.”

That’s something that has to be debated. There has to be a genuinely open debate. It can’t be a, “Yes, we’ll go through the motions but nothing will change.” It’s got to be, “Maybe we should.”

I know where I stand in this debate: I think it would be a mistake, I think to deny history [by removing names] would be a mistake. But I want to have that debate with people who feel differently, I want to hear them, I want to entertain ideas I’ve never entertained. Unless we do that, we may dampen the controversy, but we’re not going to actually move forward.

What should the balance of power work at a university? What’s the role of students?

This is not just about Woodrow Wilson. This is about Michael Brown and Eric Garner and Tamir Rice. This is about that sense that we are watching black teenagers be shot in cold blood and nothing is changing. That level of anger and frustration and not being heard is comparable to the 1960s. I think these students are tapping into the next wave of the civil rights movement. Let us hope that those of us in positions of power understand the bigger stakes here.