GOP "patriotism" is a sick joke: Here's proof that Republican allegiance is really to the NRA

For all their bluster about keeping the country safe, Republicans are proving themselves unwilling to cross the NRA 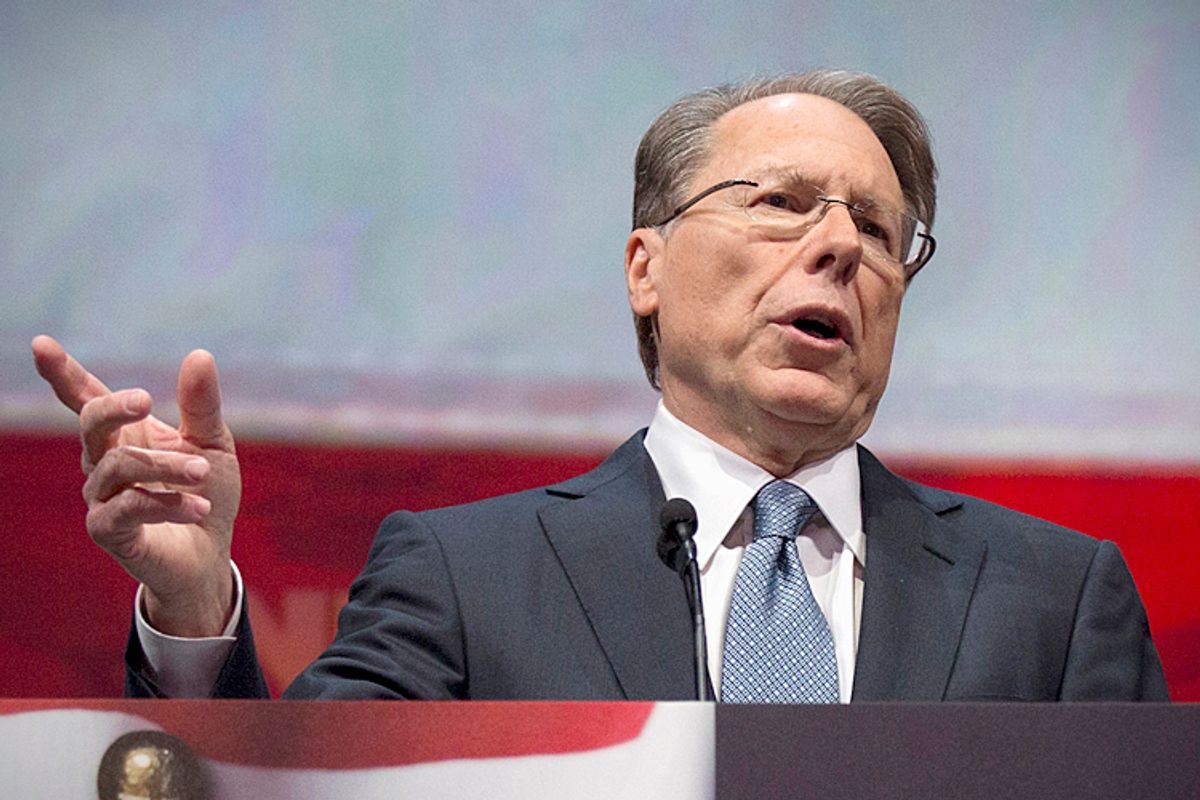 The Republican Party of 2015 will surely be defined by future historians and political scientists as the party of obvious cognitive dissonance.

The GOP in the age of Obama has staked its reputation on ideas that are derived from mostly saying the opposite of whatever the president says, regardless of how ridiculous they sound in the process. Consequently, the congressional Republicans have voted dozens of times to repeal the Affordable Care Act even though the original architects of the most controversial parts of the law were Republicans Mitt Romney, Bob Dole and Chuck Grassley. Likewise, Rand Paul, "the most interesting man in politics," once filibustered Obama’s use of predator drones on American citizens overseas while later suggesting that drones should be used against American liquor store thieves. More recently, the GOP has resurrected its terrorism fearmongering from the early 2000s, including its determination that constitutional liberties are irrelevant in the face of the ISIS threat, even though just two years ago, the Republicans loudly assaulted Obama for continuing the NSA surveillance operations established and endorsed post-9/11 by those very Republicans.

We could spend days listing the roster of GOP contradictions. Regarding terrorism and liberty, you might recall how, during the post-9/11 era, the GOP established itself as the counterterrorism party -- the only party that'd "smoke out the evildoers." In the process, the Republicans branded themselves as the Patriotism Party while scolding the unpatriotic behavior of everyone from Max Cleland to Natalie Maines to Bill Maher after they dared to criticize the Bush administration's motives and means.

Fast forward to 2015 when the GOP's kneejerk patriotism isn't as rock-solid as they led us all to believe. It turns out the GOP's superhero jingoism is rendered impotent in the face of Wayne LaPierre and the National Rifle Association. Given the choice between making sure suspected terrorists can't buy firearms in the United States -- a position that ought to be mandatory for a "smoking out the evildoers" platform -- or to make sure they don't piss off the sacrosanct gun lobby, the Republican Party has mostly chosen the latter. In other words, a not insignificant number of Republicans have refused to close a loophole in the background check system that allows suspected terrorists to buy firearms.

Indeed, the GOP is actively characterizing President Obama as weak on terrorism, even though the GOP itself is nothing more than a herd of fainting goats when it comes to opposing the NRA on background checks and the gun gap.

Since word of the loophole broke following the ISIS attacks in Paris, The New York Daily News has launched a front-page headline campaign intended to humiliate the NRA and its Republican minions. It's about time the traditional press called it like it is: the Republican Party, as well as too many Democrats, are owned by the NRA.

As of right now, a bill to close the "gun gap" loophole, the Denying Firearms and Explosives to Dangerous Terrorists Act, has been stalled in committee since February of this year in spite of the rise of ISIS. One of the few Republican co-sponsors of this year's bill, Pete King, lamented the almost complete lack of GOP support. "To be honest with you, I don’t see much enthusiasm on the Republican side," the New York Republican said late last week, "It’s one battle at a time." And most of those battles are lost to LaPierre and his relentless band of gun lobby stooges.

In terms of the Republican presidential field, Donald Trump supports closing the loophole, while Dr. Ben Carson and Chris Christie oppose any such measure. Ohio Governor John Kasich hadn't even heard of the loophole.

But that's not the full story.

Closing the gun gap dates back to the Bush administration. In 2007, former New Jersey Senator Frank Lautenberg tried, with the support of the Bush White House, believe it or not, to close the loophole, but the amendment was killed by the NRA, which, again, is tasked with one thing and one thing alone: selling as many guns as possible via the exploitation of the Second Amendment. Anything and anyone who stands in the way of the industry's blood-soaked profit machine will be destroyed.

The gun gap was brought up again in the wake of the Boston Marathon bombing and, as predicted, it failed, not unlike the Manchin-Toomey amendment, with its roughly 90 percent popular support, to expand background checks in the wake of Sandy Hook.

In early 2013, an American al-Qaeda operative named Adam "Jihad Joe" Gadahn posted a video in which he encouraged fellow terrorists to take advantage of the U.S.'s loose gun laws, saying in part, "America is absolutely awash with easily obtainable firearms. You can go down to a gun show at the local convention center and come away with a fully automatic rifle without a background check and, most likely, without having to show an identification card." And yet Congress failed to pass anything by way of closing various gaps in the background check system.

According to Government Accountability Office, a full 91 percent of suspected terrorists were allowed to easily purchase firearms in the U.S. throughout the last 11 years. Furthermore, 94 percent or 455 suspected evildoers bought guns between 2013 and 2014. Only 190 potential terrorists were denied guns since 2004.

The GOP will do just about anything to cloak itself in patriotic bellicosity. They'll send your brothers and sisters into harrowing war zones, poorly equipped and without exit strategies, with enemies blended into the population. They'll call for the invasion and occupation of nation's with zero connection to 9/11. They'll tell us we can't have a First Amendment if we're dead. But all of that ends at Wayne LaPierre's line in the sand. It's been nine months since the most recent proposal to close the gun gap has been proposed and there's no real passage in sight, knowing the NRA's history of strong-arming legislators against the overwhelming will of the people and of common sense. The next time you have to practically strip naked in an airport security line, bear in mind that any would-be terrorist in line with you was easily able to buy a gun. You know, because liberty.

Free speech, voting rights, equal protection and privacy rights for women, and the ability for Muslim-Americans to freely practice their religion is totally up for grabs, but the ability of suspected terrorists to buy a gun shall not be infringed under any circumstances, according to the GOP. It's difficult to accept how egregiously disgraceful this is, and in a perfect world the GOP would be scolded into submission and the NRA would be exposed for its deadly absolutism. But don't hold your breath.