Mother of Muslim American 9/11 first responder rebukes Donald Trump: "Maybe it is time for him to go back to Germany and advocate his pro-Nazi policies over there" 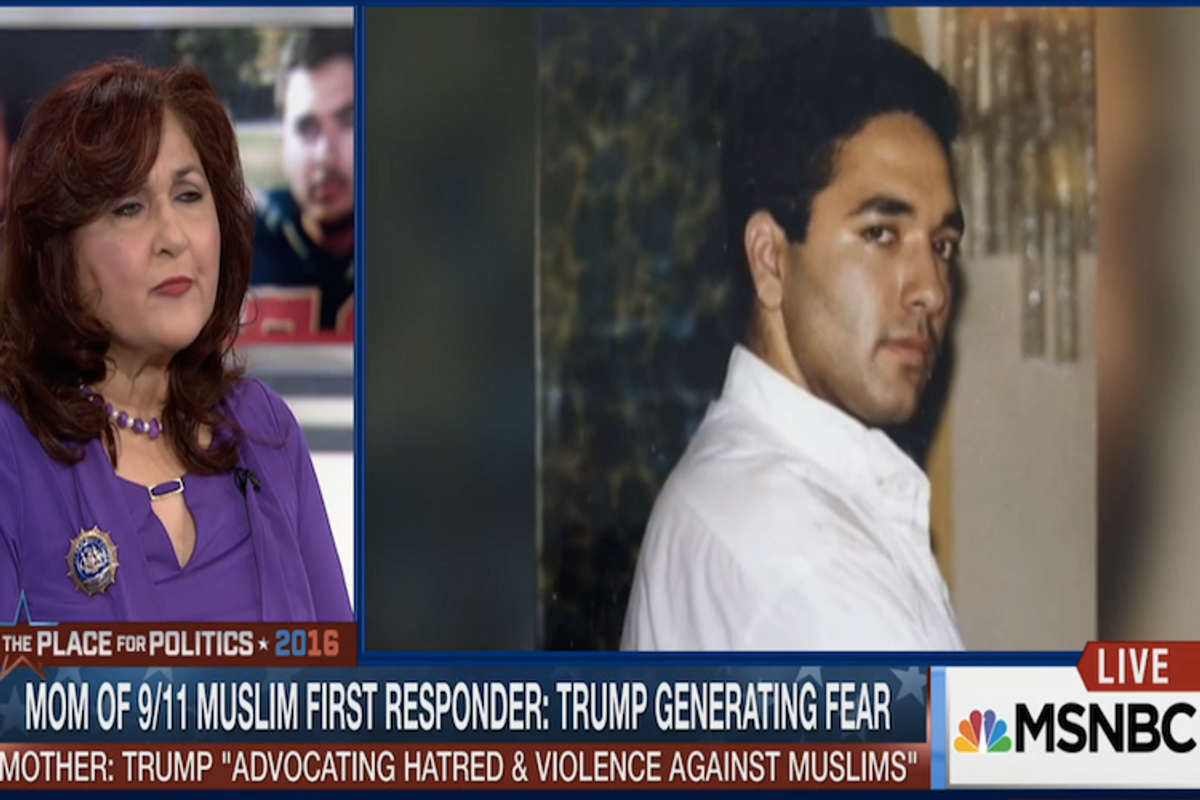 The mother of a Muslim American NYPD cadet who was killed working to rescue New Yorkers on 9/11 has a direct message to Donald Trump: Take your "pro-Nazi policies" back to the land of your German immigrant grandparents.

Talat Hamdani, who lost her 23-year-old son, Mohammad Salman on 9/11, said in an interview on “MSNBC Live with Thomas Roberts” on Tuesday that her son would have been "bemused" by Trump's latest antics but that "he would not have agreed because this is so unAmerican."

"As a child growing up, he did have to face this discrimination in the fourth grade," Hamdani explained, retelling the story of her Muslim American son being taunted in a Catholic school until a teacher assigned the students to find a Quran for a lesson on world religions. "So this is where we stand, now, as a nation.  What Salman had, you know, experienced in the fourth grade, our nation needs to be taught now, tolerance, multifaith -- through multifaith events, tolerance and assimilation and integration, instead of talking of fear, like Donald Trump and so many other presidential candidates are doing right now, at the expense of our tragedy.  We who have buried our children."

Hamadani said that such rhetoric disqualifies a candidate for higher office. "If you are running for a presidential position, you are taking an oath to uphold the constitution but here you are, you are going to violate the constitution."

[A]cross America today, we are witnessing the spectacle of politicians crassly exploiting the tragedies of Paris, Beirut and Russia for selfish political gains. Capitalizing on fear and the considerable ignorance about the Muslim faith among many of our citizens, they are in a rush to the bottom, driving a stampede of prejudicial proposals.

Quite the opposite of supporting their fellow Americans in a moment of crisis as my son did, many apparently see political gain to be had in selectively denying American Muslims their rights. If that weren’t ugly enough, many are equally ready to turn their backs on the finest American tradition of welcoming refugees fleeing violence, persecution and war.

Perhaps the worst of all is Donald Trump’s recent openness to the idea of having all Muslims registered in a database, along with his suggestion that it might be necessary to shut down mosques and force all who share my faith to carry a special ID card. This is not some fringe candidate; it is the Republican Party’s undisputed front-runner.

When others pushed back against these proposals for their obvious parallels to pre-war Nazi Germany, Trump did not back down. Instead, he further claimed this weekend that “thousands” of New Jersey Muslims cheered as the Twin Towers fell. He used this blatant lie to suggest the NYPD renew its spying program on local New York and New Jersey Muslims.

Let’s be clear here: By making such horrendous suggestions, Trump is generating fear and advocating hatred and violence against Muslims.

On MSNBC, Hamdai pointed out that Trump's grandparents had immigrated to the U.S. from Germany before suggesting, "maybe it is time for him to go back to Germany and advocate his pro-Nazi policies over there":