Chris Hayes rips Steve King for claiming not one Muslim immigrant has ever "assimilated": "Can you really defend that statement about 6 million people?"

"Do you think fundamentally Muslims from the Middle East are incompatible with American democracy?" 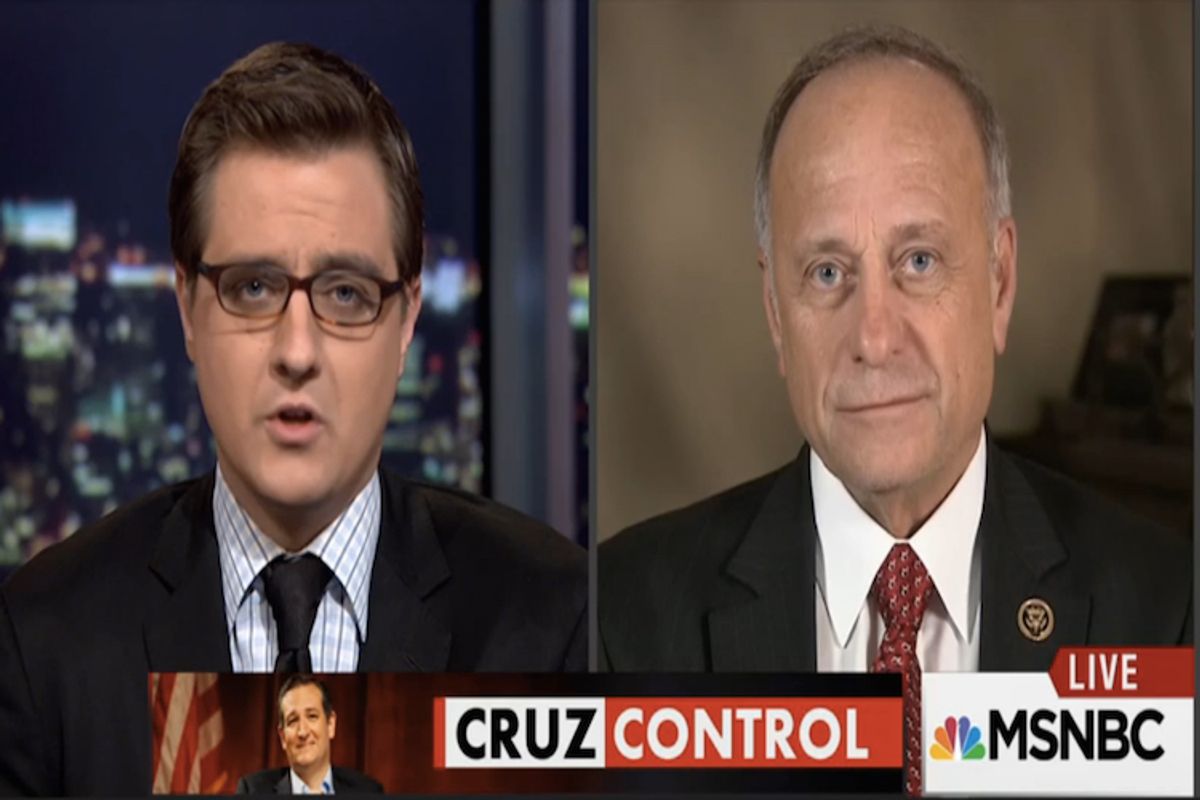 MSNBC's Chris Hayes grilled Iowa Republican Rep. Steve King about his recent comments that Muslims who immigrate from the Middle East are fundamentally unwilling to "assimilate" into the broader culture.

On Tuesday's edition of "All In," Hayes first noted that Texas Senator Ted Cruz had secured the endorsement of Hollywood actor James Woods before turning to the "somewhat more importantly" business of King's endorsement of Cruz in the all-important early voting state. After King explained how he felt confident that Cruz shared his extreme position on immigration, Hayes asked the conservative congressman about his recent remarks on Syrian refugees.

"You said no one has shown me an example of people from that part of the world that have assimilated into the broader society. Can you really defend that statement about 6 million people moral folks from the Middle East, Muslim Americans, Arabs? Is that a defensible thing to say, not one example of assimilation ever anywhere," Hayes asked King.

King's anti-immigrant sentiments have applied to Syrian war refugees long before this latest round of post-Paris attacks hysteria. Back in October, King said, "I can’t find models of the folks that, say, do the hajj to Mecca, I can’t find models where they’ve assimilated into the broader culture of civilization wherever they’ve gone."

"That's a reference to groups of people, not individuals. Of course, individuals have assimilated into the broader American society," King responded to Hayes, dismissing his sweeping generalization before bizarrely doubling down on it. "But yet, no one has shown me an example of large groups of people that have settled into American from that part of the world that have assimilated into the broader American society."

King pointed to Little Mogadishu in Minneapolis and Dearborn, Michigan to make his case. "I go into the mosques, and I've gone into the inner cities in the Middle East. I see the similar pattern in the United States that I see there. There's not assimilation taking place on the broader scale," he argued.

"Do you think that Muslims from the Middle East are incompatible with American democracy. That's the question."