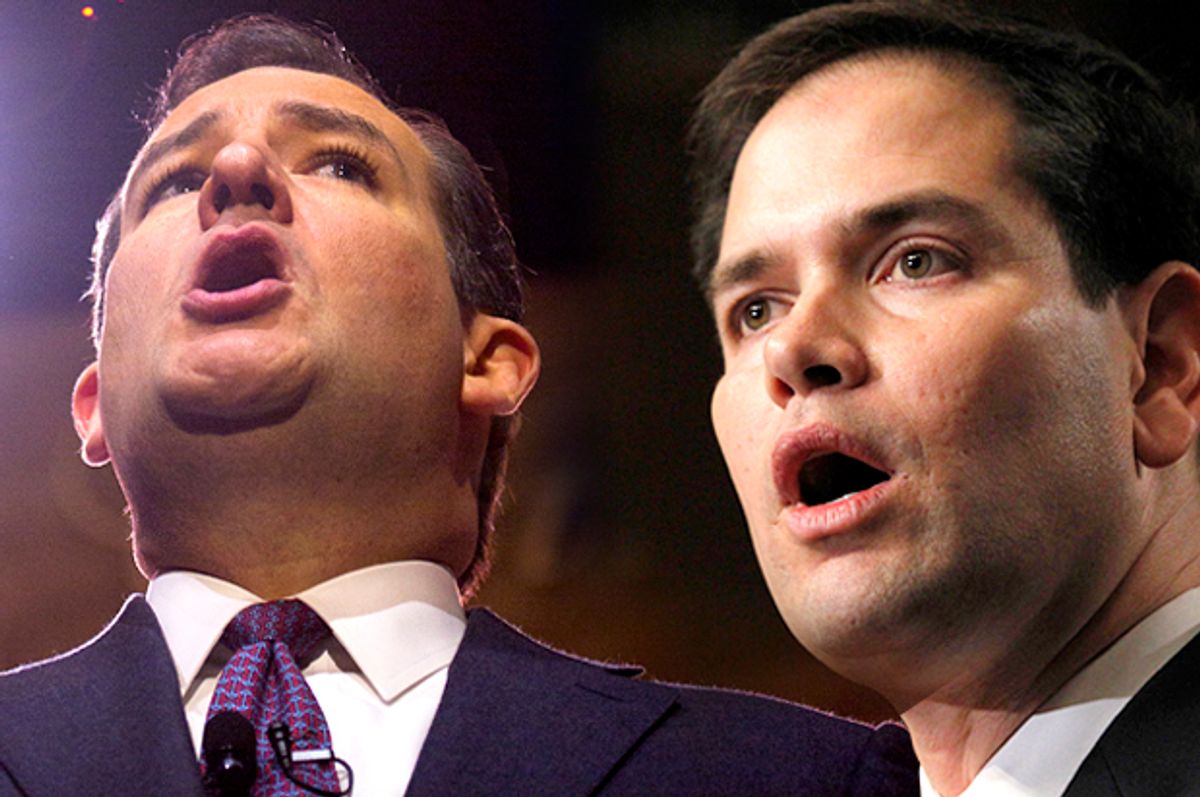 Ted Cruz and Marco Rubio are currently locked in a fight to determine which of them will emerge as the Republican presidential frontrunner when (or if) Donald Trump’s collapse finally comes about. Cruz is a devout practitioner of purity politics and his entire strategy revolves around convincing Republican primary voters of two things: first, that only a truly conservative Republican nominee can win the presidency; and second, that Ted Cruz is the one true conservative in the GOP field. When it comes to Rubio, Cruz’s plan is to render him an unbeliever, a false conservative. And he has one potent example of Rubio’s apostasy that he intends to bring up as often as is necessary: the 2013 comprehensive immigration reform bill, which Rubio helped pass in the Senate.

The obvious ding against Rubio is that the doomed reform legislation was a bipartisan effort at passing “amnesty,” which doesn’t sit well with the anti-immigrant sectors of the Republican Party. But Cruz is working to expand this attack in new and exciting ways. Just last night he went on Fox News and attacked Rubio for supporting the immigration bill because, he argued, it would have brought potential-terrorist Syrian refugees into the country.

“Marco’s campaign has determined that his longtime support of Chuck Schumer and Barack Obama’s amnesty plan, particularly making it easier to bring Syrian Muslim refugees into this country, that that’s – they’re now worried about it politically so they want to change it with a false attack ad,” Cruz said.

Republicans across the country are working diligently to stoke panic over Syrian refugees in the aftermath of the Paris terrorist attacks, and Cruz’s hit on Rubio is part of that. We’re at a place in Republican politics where “[person] wants to make it easier for people fleeing the hellish violence of sectarian civil war to make it to America” is considered an effective attack. It’s ugly, but no one ever accused panic of being a pretty thing.

It has to be pointed out, however, that Cruz isn’t being completely honest here. The 2013 Senate immigration bill did indeed have a series of provisions dealing with refugees and asylum seekers. It empowered the president to designate certain groups who are vulnerable to racial, religious, or political persecution as eligible for refugee status. At the same time, it also codified the process of background checks and security screenings that all refugees must pass through before being granted refugee status. There was nothing in the legislation that dealt specifically with Muslim refugees from Syria, so when Cruz says that Rubio was rolling out the welcome mat for “Syrian Muslim refugees,” he’s actually talking about a broader process that was not focused on any particular group and still required all potential refugees to be vetted and screened.

The weird thing is that there’s much better grist to be had if you’re looking to paint Rubio as a refugee-loving coddler of terrorists. In September, at a town hall meeting in South Carolina, Rubio said that his administration “would be potentially open to the relocation of some of these individuals [Syrian refugees] at some point in time to the United States.” Since then he’s reversed himself and done everything he can to muddy his actual position because he, like Cruz, understands that there’s political benefit in slamming the door on refugees to make yourself look “tough” on terrorism.

But Cruz is going for the immigration-refugee bank shot, telling conservative voters that Rubio tried to simultaneously open up the country to dangerous undocumented immigrants and even more dangerous Syrian refugees. It requires a little more shading of the truth than would otherwise be necessary, but sometimes you have to put extra work in to effectively capitalize on nativist resentments and xenophobic paranoia.