Don't be a crappy Thanksgiving guest: Here are 12 tips to make sure you're invited back next year

If you're not hosting the dinner yourself this year, you definitely need this advice 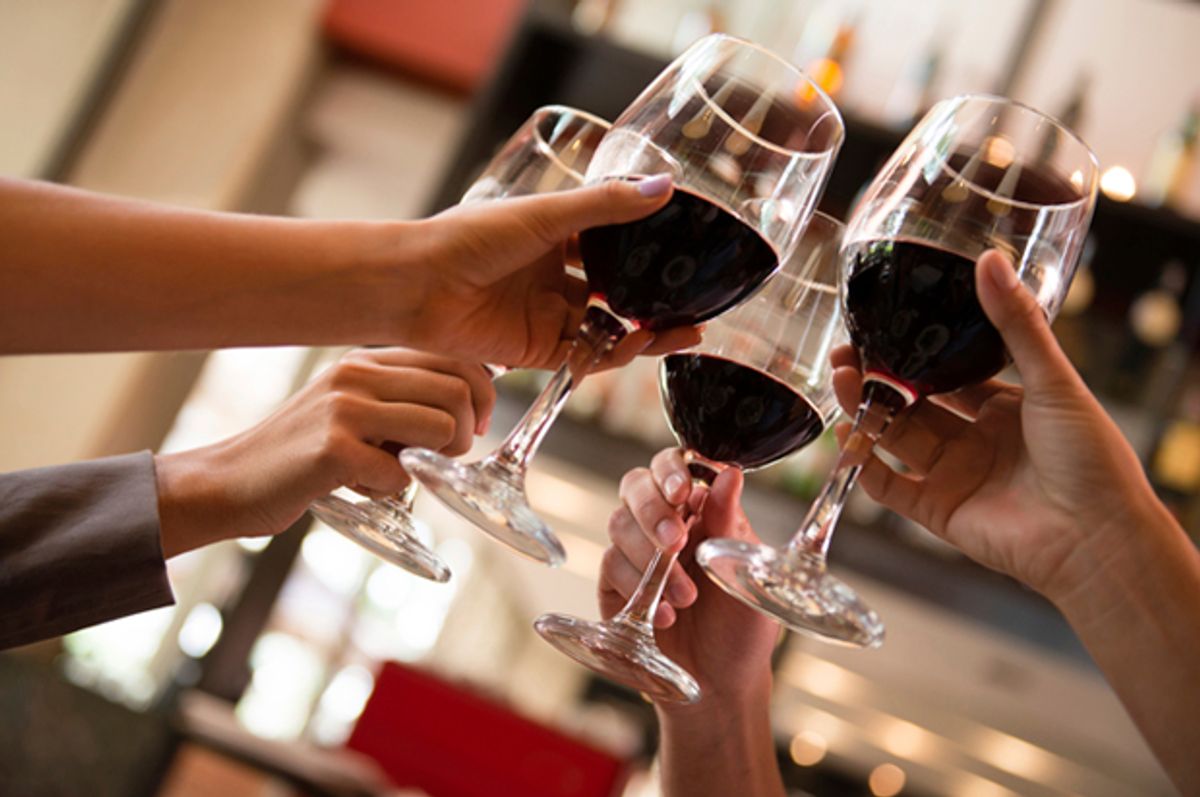 There are two kinds of people at every Thanksgiving meal: the hosts and the guests.  The hosts have the more difficult job in planning, preparing, cooking, and cleaning, and it is made even more challenging when they are forced to deal with a Shitty Guest. If you are going to be somebody’s guest this Thanksgiving, here are 12 tips to ensure you are not a Shitty Guest.

1. Bring the God damned food you say you are going to bring

Most Thanksgiving dinners these days are old-fashioned potlucks.  The host typically takes care of the turkey, the stuffing, and the gravy, and they rely on the guests to do the rest.  So if you offer to bring cranberry sauce, bring the God damned cranberry sauce.  Or if you are delegated you to bring something like, say, the mashed potatoes, and you try to push your kick-ass creamed corn, you’d better not show up with anything but the fucking mashed potatoes. Period.

So you stuck with your assigned dish, and then you went and got clever. Not advised. Do not surprise your host with something you weren’t supposed to bring, like your mom’s famous traditional onion dip.  Chances are, hors d’oeuvres are already covered, and that 15,000 calorie-per-tablespoon dip you thought was so kitschy and vintage will fill up the entire household before they get to the dinner table. Flowers?  Fuck that, because all it means is that your host needs to stop what they’re doing and find a fucking vase while you remind them the stems need to be trimmed before they go in water.  So unless you bring your pre-cut stupid flowers already in a vase with water, just stick to the food and bring the damn food you say you’re gonna bring.

3. That food had better be ready to eat

Okay, so you’ve offered to do the Brussels sprouts because you have an AMAZING recipe that you googled like ten minutes ago. The recipe calls for walnuts, bacon, red wine vinegar, two sticks of butter, a stupid cinnamon stick, and of course Brussels sprouts.  You do the shopping and you’re ready to go.  Good for you!  Next, and this is very important, do everyone a favor and COOK THE FUCKING FOOD AT HOME.  Do not show up at your host’s place with two Whole Foods bags of shit and then request a cutting board, the sharpest knife in the house, the biggest pot they have, and a burner on the stove top, because that is a sure-fired way of making your host hate you for the rest of your life. Not only are you taking up valuable kitchen real estate, you’re creating dirty dishes that you undoubtedly will not be washing, you asshole.  Even if your food is sitting out for two hours and tastes like garbage after it’s been microwaved, that is a thousand times better than showing up with raw fucking ingredients.

4. Bring your shit in a container that can be thrown away

There’s an aisle in every grocery store that has these foil metal containers that cost less than a pack of cigarettes.  If you’ve never been down this aisle or aren’t willing to look for it, then you have no right to attend someone else’s Thanksgiving dinner.  When your host sees that you brought the green bean casserole in a foil metal tray, you may actually give them an orgasm.  There are clinical studies dating back to the first Thanksgiving that show the reduction in a host’s dishwashing time is a proven aphrodisiac.  Look it up.  But if you absolutely insist on bringing your own casserole dish, then not only should you volunteer to wash your own dish, you’d better wash every God damned dish in the house.  You may be stuck washing dishes while everyone else is enjoying pie, but it’s your own damn fault.

5. If you think you’re being sweet by offering to help, go in with a plan

Assume your host is stressed out.  Assume your host started regretting hosting Thanksgiving dinner seven hours ago.  When you show up, your instinct will be to set down your foil metal tray of food in an appropriate place and then ask your host something like “So what can I do to help?” or worse, “I’m all yours, put me to work!”  Your host is trying to remember when he or she last basted the turkey, they’re whisking the roux for the gravy, they’re rolling the crescent rolls onto a sheet pan, they’re getting ready to set the table – they’ve got a thousand things going through their minds, and the last thing they want to do is think about your needs. Instead, stand outside the kitchen, politely lean your head inside, wait for the exact right moment, and ask something specific and helpful like, “May I open the wine?” or “Can I offer you a Vicodin?” Their yes or no answer requires no thought, and their appreciation will show when they stick the “I’m-all-yours-put-me-to-work” asshole in the overflow metal folding chair at the table and you get the proper dining chair.

6. Keep your suggestions to yourself

This one’s pretty straightforward. You are a GUEST in someone else’s house.  Do not offer suggestions or tell your host what to do.  Even if they are doing something completely wrong like carving into the meat without letting it rest for at least 30 minutes, or if you see them break out the gravy packets instead of making a true turkey-drippings gravy, keep your trap shut unless you want to get stabbed.

Yes, it is commonly known that Thanksgiving is about the 4 F’s: Food, Family, Friends, and Football.  However, be prepared for the slim chance your host will not be showing the football game on the living room flatscreen.  Perhaps it is tradition in this household to play the fucking DVR’d Macy’s Thanksgiving Day Parade over and over again until dinner is served.  Or maybe they need to drown out the kids with a screening of “Frozen” and no one thought to set it up on the basement TV.  Don’t insist on turning on the football game, because it’s not your decision to make.  You are a guest, so if you absolutely need to know how your fantasy team is doing, then check your phone like everyone else.

This should go without saying, but unfortunately there’s always That Guy who arrives in shorts and his beloved Señor Frogs tee shirt.  If you’re That Guy you need to know you look like an asshole.  Just because there’s football on doesn’t mean you don’t have to wear pants, and would it kill you to throw on a shirt with a collar on your coveted day off?  It’s Thanksgiving dinner, for chrissake. Treat it like a dinner party, even if it’s at your mom’s house.

The turkey you eat on Thursday night will likely not be the greatest turkey you’ve ever tasted in your life.  The fact is, turkey is not the most flavorful meat around.  Even at its best, it’s hardly a top-five meat.  Nobody goes to a restaurant and suggests, “Try the turkey, it’s the best in the city!”  Honestly, if the pilgrims served a ribeye roast at the first Thanksgiving, how much more would we be looking forward to Thanksgiving dinner every year?  So no matter how bland or dry or tough the turkey is, be sure to compliment your host, because they just spent a full day out of their lives cooking it.  You can choke down anything with the right amount of gravy.

There could be three more meals worth of food on the table after everyone’s gorged through two platefuls, but your hosts got first dibs on the leftovers.  Don’t insist on taking home some turkey and stuffing and mashed potatoes and gravy because they do not belong to you until your hosts hand them to you.  Want to increase your chances of bringing home Friday’s lunch?  Go to that same aisle where you got the foil metal trays and grab a stack of those Glad disposable tupperware deals because if you think you’re gonna take your host’s leftovers, do not assume you can rob them of their fucking tupperware, too.

Sure, your hosts might have purchased a chemically-injected frozen turkey for 11 cents a pound.  Okay, they went with the chalky powdered gravy.  And yes, they pulled out the four-month-old Reddi-wip and actually set it down next to the pumpkin pie.  Just remember, nobody likes a snob.  If you are seriously averse to Reddi-wip as opposed to freshly whipped cream, then don’t put it on your fucking pie.  Just don’t let anyone see you wrinkle your nose at the flavored non-dairy whipped topping like an asshole.

12. Make sure there is enough alcohol

If you don’t agree with any of these tips and you plan on being an asshole at someone else’s Thanksgiving dinner, you still have a chance at redeeming yourself.  On your way to your host’s house, take an extra ten minutes and stop at a liquor store.  Buy three or four extra bottles of wine and leave them in your trunk.  Why?  Because there is nothing worse than having too little alcohol.  Statistically, most of the booze gets drunk before dinner is even served, and dinner will inevitably start later than the scheduled 4:00 p.m. sit-down, so that means there could be fewer bottles of wine on the table, or worse, you could disastrously run out of wine before you start into your meal.  When that happens, calmly excuse yourself, go to your car, and get those bottles.  You might have been a shitty guest all night, but you’ll probably get laid now, because everyone loves a hero.