Don't go home for the holidays: For some of us, Friendsgiving is more than a meal — it's a lifesaver

If you're spending Thanksgiving with friends instead of with family, you're not alone 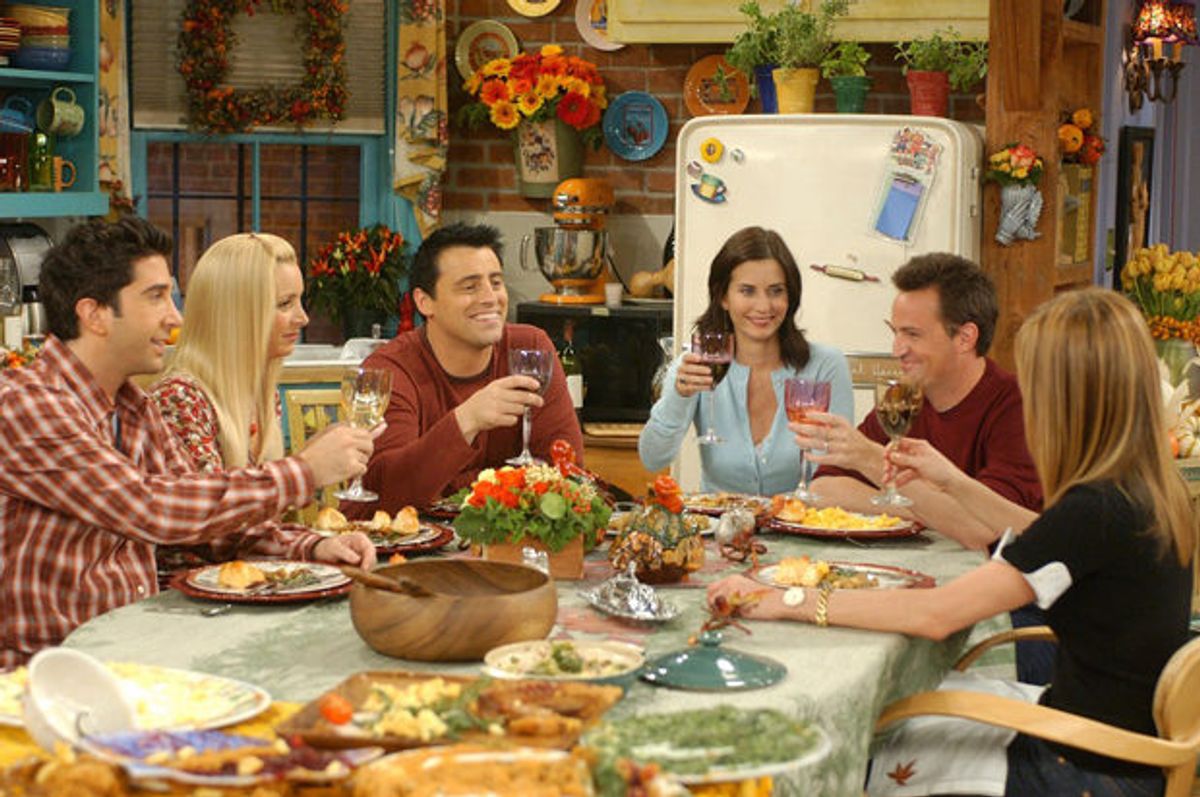 While Thanksgiving might conjure up a "Home for the Holidays"-style image of Mom, Dad, and the whole family gathered around a succulent headless bird, this isn’t the reality for everyone—including many queer people. For instance, 40 percent of homeless youth identify as LGBTQ, forced out of their homes and communities after coming out. Some queer youth and adults may be cut off from contact with their family entirely, while others might have parents or siblings that are struggling with tolerance. Many families may never get to that place of understanding.

But you don’t have to identify as queer to understand why making the often arduous trek back home isn’t joyous for everyone, especially if you live in another state or abroad. Pew found that 75 percent of college grads relocate at least once, and that’s likely be for work in large cities, taking them away from the communities in which they were raised. Statistics show that more Americans are traveling for Thanksgiving than ever, and that experience can be a headache. The holidays are the worst time to fly, between the increased ticket prices and the nightmare lines at the airport. JFK, for example, has the longest customs wait times in the country (up to 93 minutes on average), and that estimate doesn’t even factor in the holiday rush.

If you hate flying or you, well, hate your family, Friendsgiving offers an alternative to what can be an exhausting tradition. Although its origins are unclear, the concept was seemingly pioneered by the popular television sitcom Friends, in which the titular comrades for sit down for a yearly meal together. But the Friendsgiving trend has become particularly popular with young people in the era of social media—with the first Urban Dictionary entry for the observance dating back to 2009. On Instagram and Facebook each year, millennials commonly share photos of home-cooked meals and sepia-tinged selfies in which guests pile together to make duck faces.

The observance is usually celebrated the day before Thanksgiving, meaning that young people don’t have to choose between their friends and relatives. (Others might celebrate Friendsgiving in place of family time.) USA Today’s Kirsten Clark posits that the added festivities are an outgrowth of “a generation of people who schedule their lives around events.” Clark interviews Jason Dorsey, a Texas-based researcher and self-described “millennial expert,” who describes young people as “the most event-driven generation.” According to Dorsey, millennials so need to pack their calendars with things to do that we even create new holidays—like National Donut Day or Talk Like a Pirate Day—to fill the empty space.

But it’s not just the rise of Facebook event invites that has led millennials to rethink our definition of what the holidays mean to us. It’s part of the expanding concept of family itself. In the queer community, the idea of “chosen family” is popular among LGBT-identified individuals as an alternative to the nuclear unit, building the intimate communities we too often lack at home. As the name suggests, the term refers to the people you opt-in to surrounding yourself with—whether those are friends, neighbors, or peers. Even Greek life, by terming its participants as sorority sisters and frat brothers, has sneakily embraced the queer redefinition of family as a relative concept.

Queering the family has gone surprisingly mainstream, so much so that Rachel Green herself, Jennifer Aniston, discussed it in a 2011 interview. “Where would you be without friends?” she asked. “The people to pick you up when you need lifting? We come from homes far from perfect, so you end up almost parent and sibling to your friends—your own chosen family. There’s nothing like a really loyal, dependable, good friend. Nothing.” And the former "Friends" star isn’t the only celebrity to embrace the idea. During the press tour for the upcoming "Sisters," in which Tina Fey and Amy Poehler play siblings, Poehler said, “Neither Tina or I have sisters in real life. We are each other's chosen sister.”

Whether chosen family is a complement to your relatives or a replacement for them, these relationships are some of the most sustaining in our lives. And as much as I’m one of the lucky ones who has a fairly good relationship with my family (it’s complicated), I’ve recognized how important it is to set aside a day to give thanks to the people who choose to be around you. Every year, I spend Thanksgiving with two of my best friends—a lesbian couple in Chicago’s Andersonville neighborhood who spend the entire day cooking. In my years of attendance, we’ve never once eaten the turkey before 10 p.m.—because the guests are usually too busy enjoying each other’s company (read: drunk) to worry about it.

But with time, our chosen families change. I relocated to New York last year for a job,and they split up. After this year’s holiday was called off, my boyfriend and I decided to carry on the tradition ourselves by hosting our own Friendsgiving with two women in Harlem we plan on rooming with in the spring. They were the first people I really felt close to in the city, and on paper, we make no sense as friends. I’m a staunch atheist, and they go to church together in the Bronx every Sunday. They’re open-hearted and kind, whereas I often come across as cold and standoffish (I blame my RBF). But despite our seeming differences, I can’t imagine anywhere else I’d rather be tomorrow.

They always say that you don’t get to pick your relatives, but Friendsgiving recognizes that sometimes your family chooses you.