Laquan McDonald is why Black Lives Matter: Race, the police, and the chilling reality for black America 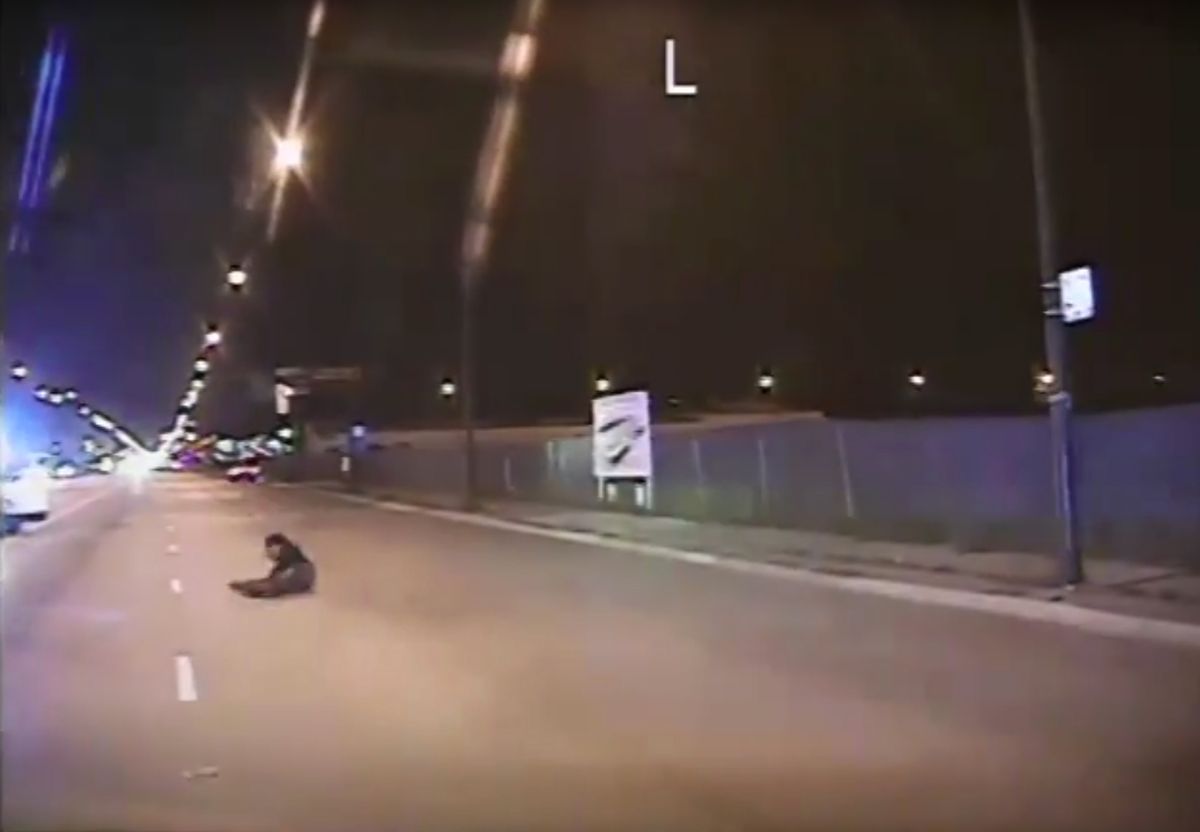 The Right-wing echo chamber and conservatives  have been wondering “Why do Black Lives Matter?”

The answer is readily apparent.

McDonald was repeatedly shot, turning away from, while falling down, and apparently while lying on the ground dying. It took only 30 seconds from Van Dyke’s arrival on the scene for him to shoot Laquan McDonald to death. One year later, the city of Chicago finally decided to charge Jason Van Dyke with first degree murder. McDonald’s family was paid $5 million dollars by the city of Chicago.

Tamir Rice, a 12-year-old black child was shot dead by two Cleveland, Ohio police officers. His “crime?” Tamir was playing with a toy gun in a park. And adding to the grotesqueness of the events that day, the police told investigators they believed that a 12-year-old was actually 20 years old.

Freddie Gray had his spine severed by the Baltimore police. He would later die in the hospital.

Rekia Boyd, another African-American Chicago denizen, was shot in the head by Dante Servin, a white off-duty police officer, who fired blindly into a crowd in 2012.

Tyisha Miller was killed while she slept in her car. Riverside, California, police shot her 12 times.

Jonathan Ferrell was shot 10 times by a white cop while seeking help after a car accident.

John Crawford III was shot by white cops in an Ohio-area Walmart moments after picking up a toy pellet gun and walking to the cashier to purchase it.

Amadou Diallo was shot 41 times while getting his wallet to show New York Police Department officers his identification. Haitian immigrant Abner Louima was sodomized with a toilet plunger by New York police. Unlike Diallo, he miraculously survived.

Walter Scott was recorded being shot to death by Michael T. Slager, a South Carolina police officer, in cold blood. Slager was recorded by a witness planting evidence at the crime scene.

Sandra Bland is found dead in her jail cell after what many observers have identified as a racist “pretext stop” in Texas.

Eric Garner was video recorded being choked to death by a New York City police officer for the “crime” of selling loose cigarettes.

Trayvon Martin is dead because he walked home with a bag of Skittles and some ice tea. A white identified vigilante decided that Trayvon was a “threat” to be “neutralized” under ominously racist “Stand Your Ground Laws.”

Unarmed Black men are at least seven times more likely to be killed by America’s police than are white people. Social psychologists have demonstrated that police officers are quicker to shoot a black person than they are a white person.

It is estimated that America’s police will kill at least 1,100 people in 2015. However, this number is based on conjecture and speculation. And in a manner better suited for a third-world dictatorship where people are “disappeared”, the police departments in the United States are not required to keep an accurate accounting of how many people their bullets, batons, grenades, and other weapons have killed. African-Americans, Latinos, and First Nations peoples are given harsher sentences than white people who are charged with the same crimes. The American criminal justice system is both racist and classist against non-whites at almost every level from the beat cop through to prosecution, sentencing, and parole decisions. Social scientists have documented how white Americans, even after having been shown that the criminal justice system is profoundly racist against African-Americans, still support this arrangement of power.

America’s police kill with near impunity and without consequences. They are rarely convicted or even charged in excessive force and murder cases. In Chicago, Jason Van Dyke, is one of the first police officers to be charged with murder in decades--in a city that has spent tens of millions to settle police brutality cases.

Laquan McDonald in one of many recent examples where the killings of black people by America’s police have been video recorded.

These video and photographed moments of white on black police (and vigilante) violence are not new. They can trace their origins back to the lynching photography of the 19th and 20th centuries that documented for White America’s pleasure how thousands of black men, women, and children were hung, tortured, dismembered, burned alive, shot, and otherwise destroyed by white mobs. There are more recent antecedents to the shooting death of Laquan McDonald as well. A prime example: the merciless beating of Rodney King by Los Angeles police in 1991.

These examples are tied together across the years and decades by philosopher Judith Butler’s genius concept known as the “white paranoiac gaze.” As she argues, the White Gaze can look at the suffering of black people and find some way to justify it. The victim was a “thug.” He or she “provoked it.” Police are “only doing their jobs.” Black people are natural “criminals." A black man being beaten by dozens of cops is somehow a “threat” to them. Another black man being choked to death for selling loose cigarettes and screaming “I can’t breathe” is a danger to police armed with guns, tasers, batons, dogs, and other weapons. Police are in “reasonable fear” for their lives.

For the white paranoiac gaze, black people who are unarmed and surrendering are transformed into threats, bestial, feral, and dangerous, right out of the white supremacist imagination of the antebellum and postbellum South, men and women armed with, as conservative commentator Ben Stein said about Michael Brown, their “incredibly strong scary” selves.

Ultimately, there is a shocking lack of empathy for the suffering of black people as viewed by too many white Americans. White paranoiac gaze dehumanizes the Other in order to justify violence against them in a twisted and white supremacist version of the just world fallacy—as of course those black and brown people killed and brutalized by America’s police must have somehow, through some great stretch and leap of the imagination, done something to provoke it.

Black people in the United States have diminished life opportunities and are subjected to arbitrary violence by the State. In contrast, when white people are dying from opiate addiction it is the subject of a national hysteria. Moreover, when new research reports that the white working class and poor may be dying at a vastly increased rate as compared to people of color, the alarms of concern and panic are sounded by the mainstream media. Alas, when black and brown people die it is just the status quo ante. There is no great concern on the part of the mainstream (white) corporate media. This is the latter’s way of saying that, “Black people die all the time, what is the big fuss?”

Over the last few months, Black Lives Matter has been increasingly met with the slogan “All Lives Matter.”

“All Lives Matter” is a rejection of the basic claim on equal human rights and dignity made by the Black Lives Matter movement. As such, it is a more “polite” way of saying the white supremacist slogan “White Power.”

Black Lives Matter ought not to be a controversial or provocative claim given the well-documented, particular, repeated, and specific trauma and discrimination visited upon black people in the United States. However, the United States is a society that is historically (and into the present) organized around maintaining white privilege, and protecting the unearned advantages of those people categorized as “white.” Although it may function in different ways for the poor and the rich, Whiteness is a “racial” identity that pays a “psychological wage” to white people as a group.

Whiteness is predicated and dependent on the unstated and assumed superiority of all “white” people over non-whites. Given America’s history—and that of the Black Atlantic more generally—this sense of superiority over black people is deeply felt.

This helps to explain why white folks react with rage towards the movement and language of “Black Lives Matter.” To suggest that the lives of black people have meaning and value, and that said meaning and value are equal to that of white people, is unacceptable. White privilege is dependent on the opposite being inexorably and irrefutably true.

The phrase “Black Lives Matter” is in many ways a radical act of resistance in a society that from its founding was based on the basic assumption that the lives of black (and brown) people have no existential value. To assert the equal value of black people’s lives enrages those white people who are invested in Whiteness. In their twisted and ethically debased and empty world, to have shared empathy, sympathy, respect, and struggle with fellow human beings who happen to be black (or brown), undermines their own sense of security, power, and authority.

It would seem that “Black Lives Matters has exposed how Whiteness and white privilege are simultaneously both very precarious and also very valuable. Perhaps this is why so many white folks will do almost anything to protect them…even if it means defending the unconscionable violence of American’s police against Black Americans.