Our democracy is completely unrepresentative: Citizens United, gerrymandering, and the real story behind the GOP's takeover 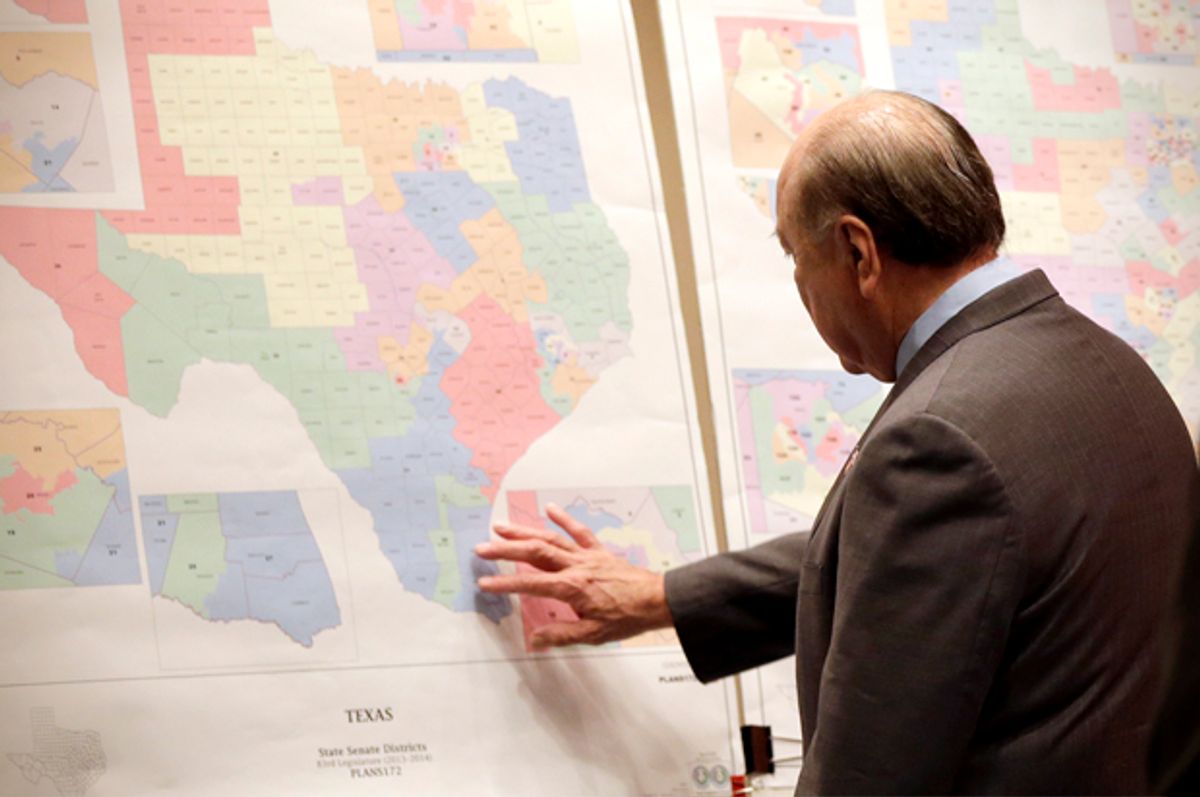 From the book "Republic, Lost: The Corruption of Equality and the Steps to End It"

Tweedism has also rendered us unequal.

But when the sense of “equality” shifts from race or sex to class, the hums of “Kumbaya” fall silent. We all may believe in racial equality, but wealth equality? For a large majority of Americans, especially on the Right, no way.5The same is true for speech equality.

Even for many on the Left, no way. We are all egalitarians in some spheres at least, but we are not egalitarians in all spheres. Americans embrace— indeed, celebrate— the inequalities among us, and for the vast majority of us, we believe that government has no place in trying to eliminate these inequalities.

This is the sense of equality in John Adams’s description of a legislature: “an exact portrait, in miniature of the people at large, as it should feel, reason and act like them.”

This is the sense of equality that James Madison had when he promised a branch “dependent on the people alone,” in which “the people” were “not the rich more than the poor.”

Obviously, across our history, America has not lived up to this ideal equality. Blacks were slaves. Women were practically the property of men.

But the failures across our history are mistakes that we, as a people, discovered, not mistakes that were intended. We— all of us— see their mistake with race, and sex. They didn’t. And the struggle of ideals that is the story of America is the fight to achieve equality when inequality is finally recognized. Some always saw the inequality as inequality. Eventually, everyone came to recognize what only some originally saw.

Yet the equality of citizens is an equality that our Framers saw then, but that we have forgotten now. They saw then that a system that gave “the rich,” again, as Madison put it, more power than “the poor” violated the core commitments of a representative democracy, what they called “a Republic.” “The people” upon which Congress was to be “dependent alone” were not to be “the rich more than the poor.” “The people” upon whom our Congress is dependent today, however, are “the rich more than the poor.”

But didn’t the Framers restrict the vote to property owners only? How could that be a commitment to equality regardless of wealth?

They did— though at the time, as John Steele noted, “almost every man is a freeholder, and has the right of election.” And in any case, in the view of most at the time, the vote was reserved to property owners as a means to avoid aristocracy. As Gouverneur Morris stated, “Give the votes to the people who have no property, and they will sell them to the rich who will be able to buy them. . . . If you don’t establish a qualification of property, you will have an Aristocracy.” This was Blackstone’s view as well (“if these persons had votes [that] would give a great, an artful, or a wealthy man a larger share in elections than is consistent with general liberty”). Whether their prediction was right or not as a factual matter, their motive was not aristocracy.

Yet to say “the people” means “not the rich more than the poor” is decidedly not to say that there should be no rich or no poor. It does not, in other words, mandate equal wealth. Likewise, to say that we are entitled to be equal citizens is not to say that we must equalize speech, or that everyone must have equal persuasive influence. Those kinds of equality might or might not make sense (and in the extremes, I would oppose both).

Why we are so confused about the idea of equality today is a powerfully interesting question. We have been colored by the modern battles for race and sex equality— battles that have had at their core the claim of “equality as sameness.” Women have the same ability as men. Blacks are as qualified as whites. This equation then feeds, as my colleague Danielle Allen puts it in her book, Our Declaration (2014), a choice that politicians, and political philosophers, have presented us with. As Allen describes:

Too many of us think that to say two things are “equal” is to say that they are “the same.” Consequently, we think the assertion that “all men are created equal,” is patently absurd. . . . But “equal” and “same” are not synonyms. To be “the same” is to be “identical.” But to be “equal” is to have an equivalent degree of some specific quality or attribute. We can be equal in height although we are not the same as people.

Thus, when the Declaration of Independence began:

WHEN IN THE COURSE OF HUMAN EVENTS, IT BECOMES NECESSARY for one people to dissolve the political bands which have connected them with another, and to assume among the powers of the earth, the separate and equal station to which the Laws of Nature and of Nature’s God entitle them . . . no one believed that the United States was “equal” to Britain, in the sense of wealth, or power, or the ability to influence— despite the declaration that we would assume an “equal station.”

The United States was a developing nation; Britain was arguably the most powerful nation in the world. Whatever “equal station” means, it could not possibly mean “equal” in the sense of the equality of stuff. “Equal station” means the equal status of each nation, recognizing the vast differences that exist between these “equal” nations. Again, Allen:

And political equality, or as I describe it, equality of citizens, thus means, as Allen puts it, “equal political empowerment.”

No doubt, from our perspective, the Framers practiced that equality poorly. Women were not equal citizens. African- Americans were slaves. Those were the great mistakes of our tradition, and (some of) our parents and grandparents and great- grandparents worked incredibly hard to correct those mistakes. After generations of struggle, we’ve made progress on those corrections, and there is still a great deal to be done.

But isn’t unequal influence and access at the core of democracy And hasn’t the Supreme Court explicitly held that “equalizing the relative ability of individuals and groups to influence the outcome of elections” is not something that Congress is allowed to do?

Let me surprise you by saying: I agree with the Court. Congress has no general, free-floating power to “equalize” the “influence of speech.” Speech equality is “constitutionally suspect,” as Dean Robert Post puts it. It is certainly not a founding principle. The First Amendment is pretty clear evidence of its rejection.

Tweedism is such a structure. Tweedism reserves to some—the tweeds— first dibs on selecting the candidates that the rest of us get to vote among. Is that reservation constitutionally permitted?

Certainly sometimes it is— think about a party primary. There’s nothing wrong in principle with a system that identifies the party candidates that get to compete in the general election. All citizens are equally free to join a political party. They might not like the choices, but they’re not banned, formally or effectively, from joining.

But it is equally certain that sometimes such a reservation is permitted.

Think about the most extreme case: Imagine Congress said that in the next election, candidates for Congress shall be selected by “a nominating committee” of the 100 richest Americans.

There is no possible way that such a scheme could be constitutional, even though, as the Supreme Court said in Citizens United, “the people have the ultimate influence over elected officials,” and even if, in abolishing it, Congress would be “equalizing” the speech of those 100 richest Americans with the rest of us.

The problem with this explicit tweedism is not unequal speech.The problem is a structure that defeats the potential for equal participation. That structure “defeat[s] the right of the people to choose representatives for Congress,” because it makes members of Congress “dependent” on a group that cannot be said to represent “the people.” This is a “democracy with Chinese characteristics,” as Martin Lee put it. It is a system that defeats the rights of the people. It is a system that corrupts the basic commitment to a branch “dependent on the people alone.”

Now of course, there is a huge difference between a system that explicitly says “the 100 richest get to pick” and a private system for funding political campaigns. That difference should not matter for the Constitution. It is a corruption of the Framers’ design whether the tweeds are selected or not. It is a corruption because it creates a dependence on something other than “the people alone.”

“But is the way we fund campaigns the only source of inequality?”

Obviously not. The way we fund campaigns is but one of many ways, some direct, some not, that our democracy defeats the ideal of representativeness. And most of these other inequalities Congress is perfectly free to fix without any concern raised by the First Amendment.

We vote on Tuesday, which means we make it more difficult for a significant portion of our population— ones without a flexible work schedule, or without easy child care— to vote. There’s no First Amendment problem with Congress mandating weekend voting.

Thirty- four states demand IDs to vote, meaning the poor and old are disproportionally burdened, because they are least likely to have appropriate IDs. The First Amendment wouldn’t restrict rules that remedied that burden.

That gerrymandering plus single- member districts make the problem only worse. In 2012, though 40 percent of New England voters cast ballots for Republican Mitt Romney, Republicans won exactly zero seats from that region in that election. (Don’t feel too bad for the GOP: In the same year, nationally, the party won 52 percent of the vote, but because of the winner-take-all, single- Member districts, got 57 percent of the seats.) But it wouldn’t violate the First Amendment for Congress to require multimember districts (again), or to set rules that limit gerrymandering.

You might think this is just the nature of a democracy— there will always be losers, and it’s not a political crime if the Flat Earth Party never wins an election.

But of these inequalities, the money is the most significant. There is no other exclusion as dramatic in our democracy today, and none that is as consequential. Every other problem either flows from this inequality, or is exacerbated by this inequality. This is the one we must fix first.

From the book "Republic, Lost: The Corruption of Equality and the Steps to End It" Copyright (c) 2015 by Lawrence Lessig. Reprinted by permission of Twelve/Hachette Book Group, New York, NY. All rights reserved.

Lawrence Lessig is Roy L. Furman Professor of Law and Leadership at Harvard Law School, and author of "Republic, Lost: How Money Corrupts Congress and a Plan to Stop It" (Twelve, 2011). His latest book is " One Way Forward: The Outsiders Guide to Fixing the Republic" (Byliner, 2012).