The family that binge-watches together stays entertained together: 10 shows you can devour with the whole family this holiday weekend 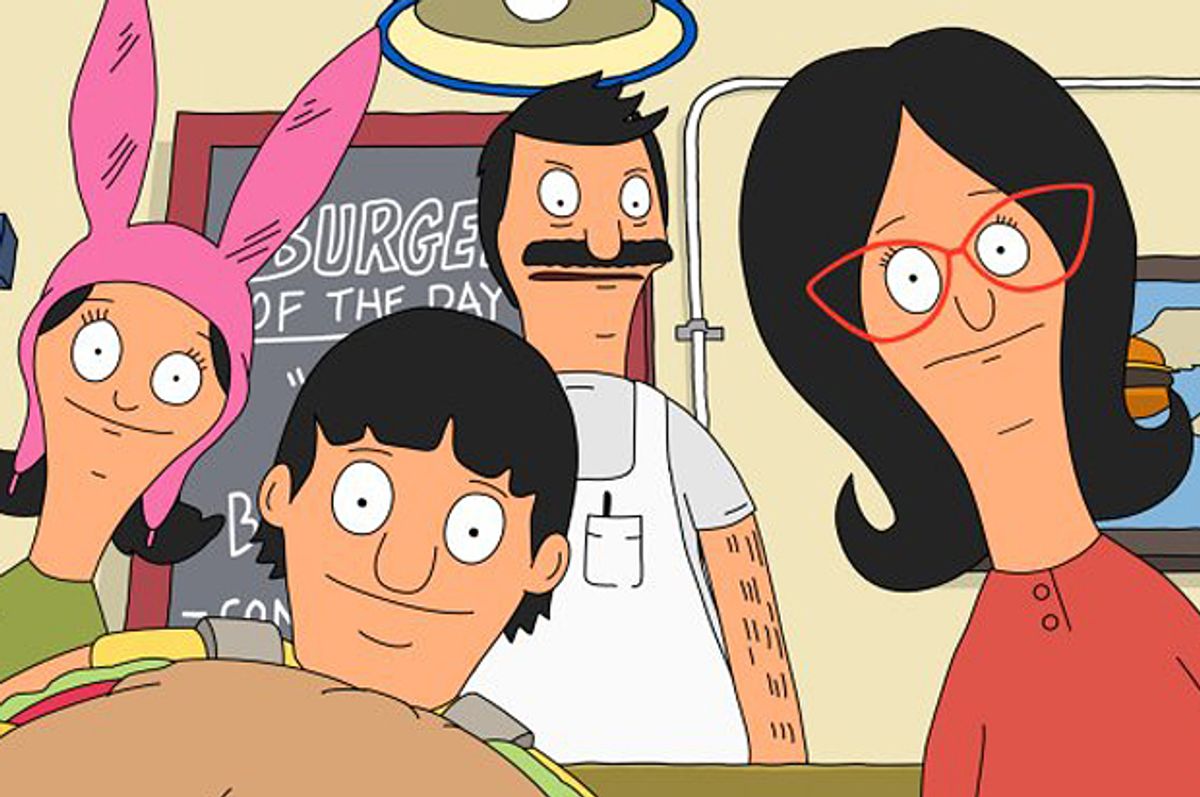 Maybe you’ve got a house full of people of all ages, a food coma to nap off and a hankering for something other than football. Or, you’re binge-watching to avoid your family this holiday season, but you want to make sure you’re watching something that isn’t going to shock a 5- or 75-year-old who happens to wander into the room. Either way, the holidays are a good time to stock up on family-friendly programming. Here are 10 shows that are addictive, easy to find on streaming platforms and don’t require a “mature content” warning.

“Bob’s Burgers”
With four seasons in the bank and a fifth season currently airing, the animated Fox comedy “Bob’s Burgers” provides plenty of material to settle into. The show follows the Belcher family—mom, dad and three kids—as they attempt to keep their modest burger joint afloat and have some fun in the meantime. It’s a cartoon, but it’s not juvenile; “Bob’s Burgers” is one of the most sincere, funny and knowing comedies on television right now, complete with thoughtful family dynamics, pop-culture references and extremely funny one-off gags. It’s well worth your time—and it’s so bright and happy, you’ll want to watch episode after episode.
Available on: Netflix has the first four seasons; Hulu has five episodes of the fifth.

“Great British Baking Show”
This smash hit is called “Great British Bake Off” in the United Kingdom, but because of a trademark run-in with Pillsbury, it’s rebranded stateside. Season one, as it’s available in the states, is actually the fifth year of the UK run—it looks like the show didn’t get acquired by American platforms until the sixth series, which just concluded, was so popular with British audiences that enthusiasm was leaking across the pond. Still, the 10 episodes of the only season available to us Americans are still incredibly addictive, as 12 bakers compete in an extremely polite and technical way to create an array of incredible baked goods—such as three tiers of savory pies, tiered sponge cakes, 36 identical mini-cakes and “self-saucing puddings,” a uniquely British form of torture.
Available on: Netflix and Amazon Prime.

“The X-Files”
There’s never been a better time to get acquainted with “The X-Files,” with a new event series just around the corner. Though it has elements that might be too scary for very young kids, its aggressively ’90s special effects serve to make the monsters of the week more campy than terrifying. Gillian Anderson and David Duchovny are still marvelous as the two FBI agents trying to work through a cosmic puzzle or two, and their never-quite-resolved sexual tension means it’s engrossing without ever crossing into NSFW territory. With nine seasons in the bag, too, it’ll take quite a while to run out of new material.
Available on: Netflix, Amazon Prime and Hulu.

“I Love Lucy”
It might be black-and-white, but “I Love Lucy,” starring comedy titan Lucille Ball in the title role, is timeless. There are 102 episodes of the classic sitcom to get through, and Ball’s facial expressions, opposite Desi Arnaz’s trilled “Luuucy,” are enough to stop any familial political dispute in its tracks.
Available on: Hulu and Amazon Prime.

“Steven Universe”
Rebecca Sugar’s—formerly of “Adventure Time”—latest creation for Cartoon Network might seem like a kids’ show, but the program, with its 15-minute bursts of joy, is just as enjoyable for adults. “Steven Universe” is a colorful, musical affair—but underneath is a surprisingly moving emotional drama about a boy whose mother gave her life for him, and the makeshift family that has formed around him since. Because it is has such short episode lengths, it’s one of the most bingeable shows out there; but don’t worry, there's a solid 52 installments in just the first season.
Available on: Hulu has season one. (But heads-up: It’s way more fun to watch with Hulu’s ad-free plan; the episodes are so short that a commercial on each end is almost as long as the episode itself.)

“Brooklyn Nine-Nine”
This comedy comes from the creators of “Parks And Recreation” and “The Office,” meaning it has some predictable delights and some entirely new ones. It has the same style—an ensemble workplace comedy with slapstick and charm—but with the exception of season two of “The Office,” it demonstrates more consistency and confidence than either. Lead actors Andy Samberg and Andre Braugher play off of each other brilliantly, and the ensemble quickly fills out to be a fun array of personalities, each with their own quirks and hang-ups. Very easy to watch, and very easy to watch a lot of, too.
Available on: Hulu.

“MasterChef Junior”
Similar to my earlier recommendation, “Great British Baking Show,” one of the reasons “MasterChef Junior” is so fun to watch is because it’s completely unlike any other competition cooking show—your “Top Chefs," your “Hell’s Kitchens," your “Choppeds." With “MasterChef Junior,” the difference is that the contestants are all from the ages of 8 to 13, and as a result, the competition takes on a completely different flavor. Eleven-year-olds ice multi-tiered cakes and 9-year-olds construct beef Wellingtons, with a side of broccolini and mashed potatoes. It makes for kind of astounding viewing. Added to that, Gordon Ramsay—normally a tyrant with his adult contestants—is a pussycat around the kids, helping them with their work and giving them measured words of encouragement. Plus, as the seasons are quite short—two kids are eliminated each episode, so as to not keep kids cooped up in a weird competition environment for too long—the episodes just fly by.
Available on: Seasons two and three are available on Hulu.

“The Flash”
This superpowered show from the CW has a distinctly teenage vibe, as almost all of its leads are high schoolers with various degrees of romantic interest in each other. But this imagining of Barry Allen’s origin story to become the fastest man on earth, the Flash, is a high school show with a dollop of the supernatural—“Buffy: The Vampire Slayer,” except not quite so snarky and dark. Instead of crucifixes, “The Flash” leans on the charm of its lead, Grant Gustin, who brings a seemingly inextinguishable smile and an earnest tilt of the head to every lightning-fast plot twist in Central City. “The Flash” requires some willing suspension of disbelief, but it has a lot of heart—and glorious, orange-red special effects.
Available on: Season one is on Netflix; new episodes from season two are on Hulu.

“Last Tango in Halifax”
This British import is about a late-in-life romance between two long-estranged childhood sweethearts, both widowed, who find each other again on the Internet. It’s sweet for how simply and honestly the two—played by Derek Jacobi and Anne Reid—fall in love with each other, and fascinating for how their middle-aged daughters and extended families end up creating all sorts of problems for them. If you’re watching TV with older relatives, this could hit the jackpot—a little tea-cozy drama about family, aging, and reconnection, with a touch of wit thrown in, too.
Available on: Netflix.

“Raising Hope”
This sitcom was easy to overlook when it was on the air, but the charming comedy about a dysfunctional family trying to raise an unexpected newborn has its own brand of slightly inappropriate humor. Not exactly bawdy; more like a propensity for poop jokes. In an era of a lot of great cutting-edge comedies, “Raising Hope” was aiming to be an offbeat family comedy; the leads, including Martha Plimpton, Garret Dillahunt, and Cloris Leachman, often were keyed to hillbilly comic relief. With its baby and grandma and great-grandma humor, though, it’s an all-inclusive sitcom for the holidays.
Available on: Netflix