The bizarre spectacle of Trump's candidacy has one word on everyone's mind: "Fascism" 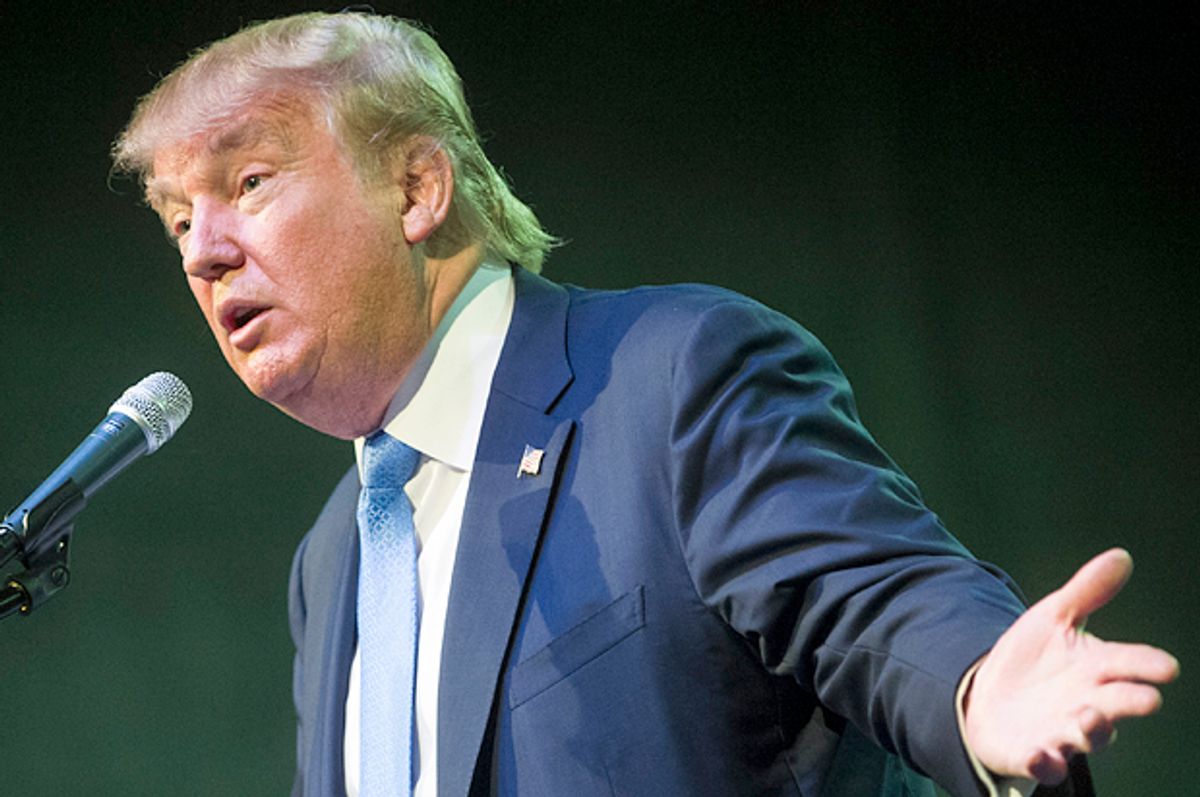 Over the past week or so, something unusual has happened in American politics: political figures, mainstream scholars and commentators are describing a leading contender for president of the United States as a fascist. Sure, people on barstools around the country have done this forever but it's unprecedented to see such a thing on national television and in the pages of major newspapers.

For instance, take a look at this piece by MJ Lee at CNN:

[I]t it was after Trump started calling for stronger surveillance of Muslim-Americans in the aftermath of the Paris terrorist attacks that a handful of conservatives ventured to call Trump's rhetoric something much more dangerous: fascism.

"Trump is a fascist. And that's not a term I use loosely or often. But he's earned it," tweeted Max Boot, a conservative fellow at the Council on Foreign Relations who is advising Marco Rubio.

"Forced federal registration of US citizens, based on religious identity, is fascism. Period. Nothing else to call it," Jeb Bush national security adviser John Noonan wrote on Twitter.

Conservative Iowa radio host Steve Deace, who has endorsed Ted Cruz, also used the "F" word last week: "If Obama proposed the same religion registry as Trump every conservative in the country would call it what it is -- creeping fascism."

Yes, this is a hard fought primary campaign with insults flying in every direction. But ask yourself when was the last time you heard Republicans using the "F" word against someone running in their own party? I can't remember it happening in decades. It's possible that some members of the GOP establishment called Barry Goldwater a fascist in 1964 (Democrats did, for sure) but that was half a century ago. In recent years this just has not been considered politically correct on left or right.

The CNN story goes on to interview various scholars who all say that to one degree or another Trump is, indeed, fascistic if not what we used to call "a total fascist." Historian Rick Perlstein was the first to venture there when he wrote this piece some months back,

It's hard to understand why this has been so difficult to see. On the day he announced his campaign, Trump openly said he believed that undocumented workers are not just criminals (that's a common refrain among the anti-immigrant right which fatuously chants "they broke the law by coming here") but violent rapists, killers and gang members. He said he wants to deport millions of people, including American citizens. In fact, he wants to restrict American citizenship to people whose parents are citizens, and thus are guaranteed citizenship by the 14th amendment.

For months Trump has been saying that we cannot allow Syrian refugees into the country and promising to send the ones who are already here back. He has indicated a willingness to require American Muslims to register with the government and thinks they should be put under surveillance.

He condemns every other country on earth as an enemy, whether economic, military or both, and promises to beat them to "make America great again." Despite the fact that the U.S. is the world's only superpower, he says he will make it so strong that "nobody will ever mess with us again" so that it was "highly, highly, highly, unlikely" that he would have to use nuclear weapons.

And he said quite clearly that he believes,

Does that add up to fascism? Yeah, pretty much. In his book, "Rush, Newspeak and Fascism" David Neiwert explained that the dictionary definition of the word often leaves out the most important characteristics of the philosophy, which are "its claims to represent the "true character" of the respective national identities among which it arises; and its mythic core of national rebirth -- not to mention its corporatist component, its anti-liberalism, its glorification of violence and its contempt for weakness." If that's not Donald Trump I don't know what is.

But if that doesn't convince you, surely this quote from Monday in Ohio will:

And I would approve more than that. Don't kid yourself, folks. It works, okay? It works. Only a stupid person would say it doesn't work.They'll say, 'oh it has no value', well I know people, very, very important people and they want to be politically correct and I see some people taking on television, 'well I don't know if it works' and they tell me later on, 'it works, it works, believe me, it works'.

And you know what? If it doesn't work, they deserve it anyway for what they're doing to us."

Now it's true that Trump isn't the first important political figure to publicly endorse waterboarding. Former Vice President Dick Cheney recently said he'd do it again "in a heartbeat" and falsely claimed that "it works." But even he kept up the fiction that it was rarely employed and only then for interrogation purposes. I don't know that any top political figure has openly endorsed torture to exact revenge.

But then Trump doesn't take his cues from political figures. He channels the ethos of talk radio and emulates the king, Rush Limbaugh, who famously described the torture at Abu Ghraib this way:

"This is no different than what happens at the Skull and Bones initiation, and we're going to ruin people's lives over it, and we're going to hamper our military effort, and then we are going to really hammer them because they had a good time. You know, these people are being fired at every day. I'm talking about people having a good time, these people, you ever heard of emotional release? You [ever] heard of need to blow some steam off?"

[...] "There's only one thing to do here, folks, and that's achieve victory over people who have targeted us for loooong, long time, well over 15, 20 years. It's the only way to deal with this, and that's why obsessing about a single incident or two of so-called abuse in a prison is nothing more than a giant distraction and could up being something that will really tie our hands and handcuffs us in what the real objective is here, which is the preservation of our way of life and our country."

Donald Trump endorses torture as a method of exacting revenge on people simply because of their nationality or religion. And he gets huge cheers when he talks about that as well as deportations and military invasions and torture and revenge.

He may be the first openly fascistic frontrunner for the Republican presidential nomination but the ground was prepared and the seeds of his success sowed over the course of many years. We've had fascism flowing through the American political bloodstream for quite some time.