Why I believed that dumb Pynchon death hoax: The elusive novelist is tailor-made to be the butt of bizarre rumors 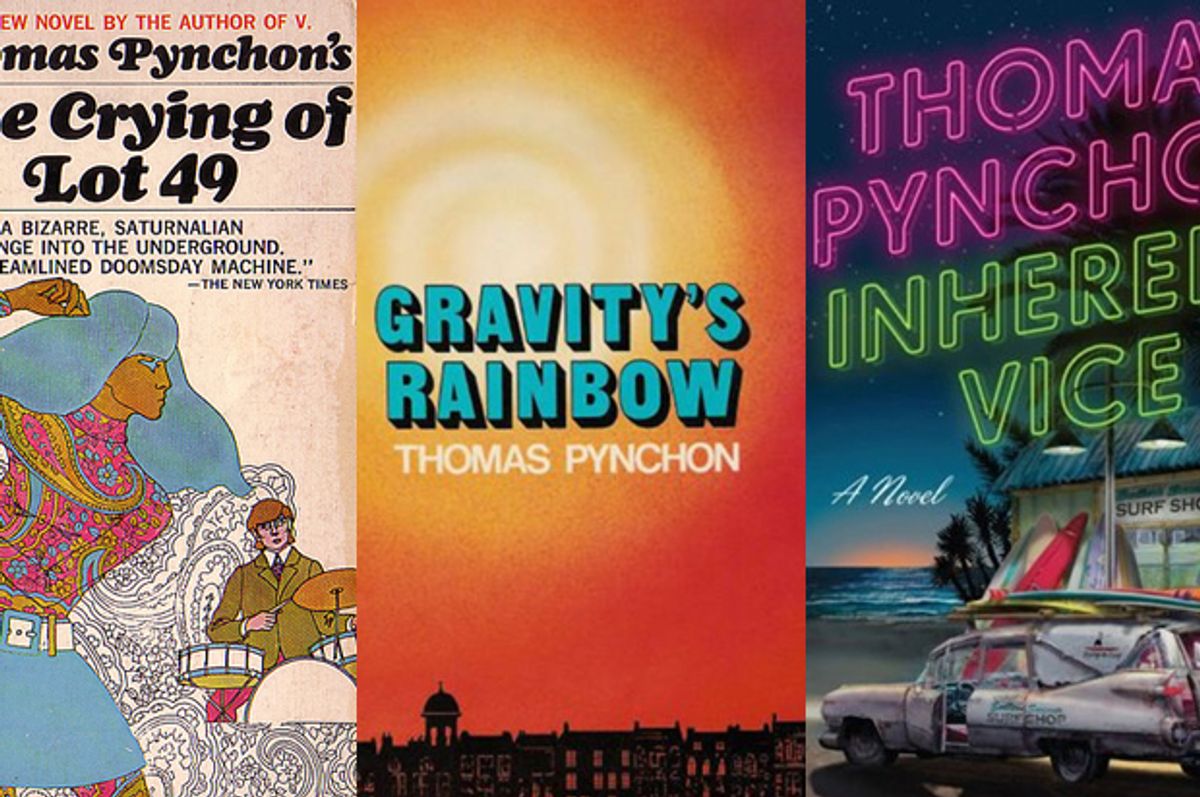 This morning, a rumor began going around that novelist Thomas Pynchon – author of “Gravity’s Rainbow” and “Inherent Vice” – had died. Internet rumors and online misinformation are not exactly hard to find these days, but this one had a special weird resonance to it, a touch of “meta” or inside joke alongside the grimness. Even when it turned out to be a hoax -- when we found out that the novelist was alive and well -- there was still something eerie about it.

Why did the hoaxer pick Pynchon – instead of say, Cormac McCarthy or Toni Morrison, both of whom are older than the 78-year-old Long Island native? And why did so many of us believe, or at least half-believe, the rumors when we heard them, despite the web’s sorta spotty record on conveying accurate information, especially about famous people?

The chatter on this one started after this Tweet from “DonDeLilloOfficial”:

We probably should have been skeptical of this missive, since this fake DeLillo had just joined the day before, this was his first communication of substance and the verb tense is off.

But a sudden, unexplained announcement of just about anything involving Pynchon makes more sense than the equivalent involving almost any other writer.

The most obvious reason is because Pynchon is a recluse: The details of his life are better known today than they were for a long time – he lives in New York City, has a young son, is married to his literary agent.

But for a long time, even Pynchon zealots were not quite sure where he was. He once – reportedly -- jumped out of a Mexico City window to dodge a photographer sent to photograph the novelist whose first book, "V.," was beginning to draw attention. When Pynchon won the National Book Award for “Gravity’s Rainbow,” in 1974 he dispatched a comedian to collect the award for him. And between then and “Vineland,” from 1990, Pynchon produced not a single novel: He seemed to be turning into J.D. Salinger.

Here’s The Guardian on a 2003 documentary:

One writer, Jules Siegel, tells how his wife ran off with Pynchon in the 1960s, and alleges, bizarrely, that Pynchon was involved with the US government's LSD experiments on unwitting subjects. Others tell anecdotes of Pynchon haunting bookshops in disguise, or turning up incognito at Pynchon-lookalike parties. The man himself, of course, is nowhere to be seen.

One of the weirdest rumors about Pynchon that circulated in the early 1990s, and which the new film does not discuss, was that he was the Unabomber.

Beyond this, though, the sudden leaking of the author’s death on the Internet – out of the blue, without reports of decline or illness – is like something out of a Pynchon book. At least since his second novel – the slim but mighty “Crying of Lot 49” – Pynchon has been interested in underground or alternate means of communications (the book’s key symbol is a muted postal horn.) Alongside this -- and accompanying his famous paranoia, something he shares with DeLillo – is a distrust of official truths. (“The X-Files” and a whole line of paranoid pop culture would not exist without Pynchon.)

The Internet’s combination of mystery and conspiratorial nonsense makes it the perfect vehicle for puzzling news about the writer. (Similarly, one of the best sources on the novels is the Pynchon Wiki.)

Not to mention the fact that Pynchon’s work can be so complicated and multi-layered that some of it remains elusive even after you’ve read it lots of times: It’s not literary clarity, which he’s certainly capable of, but a larger sense that there’s something unknowable about the guy and the way his mind works.

Fans like me have had our scare; the rumor has been debunked. It’s probably over, for now, instead of turning into a Paul-is-dead mythos that resonates like a legend. But who knows? Internet Pynchon misinformation seems like too inevitable a phenomenon – perhaps this is the beginning of a strange new cottage industry that will haunt us for years to come.