Why white people aren't called "terrorist": The media accepts that "people who resort to violence are left-wing or Arab or both" 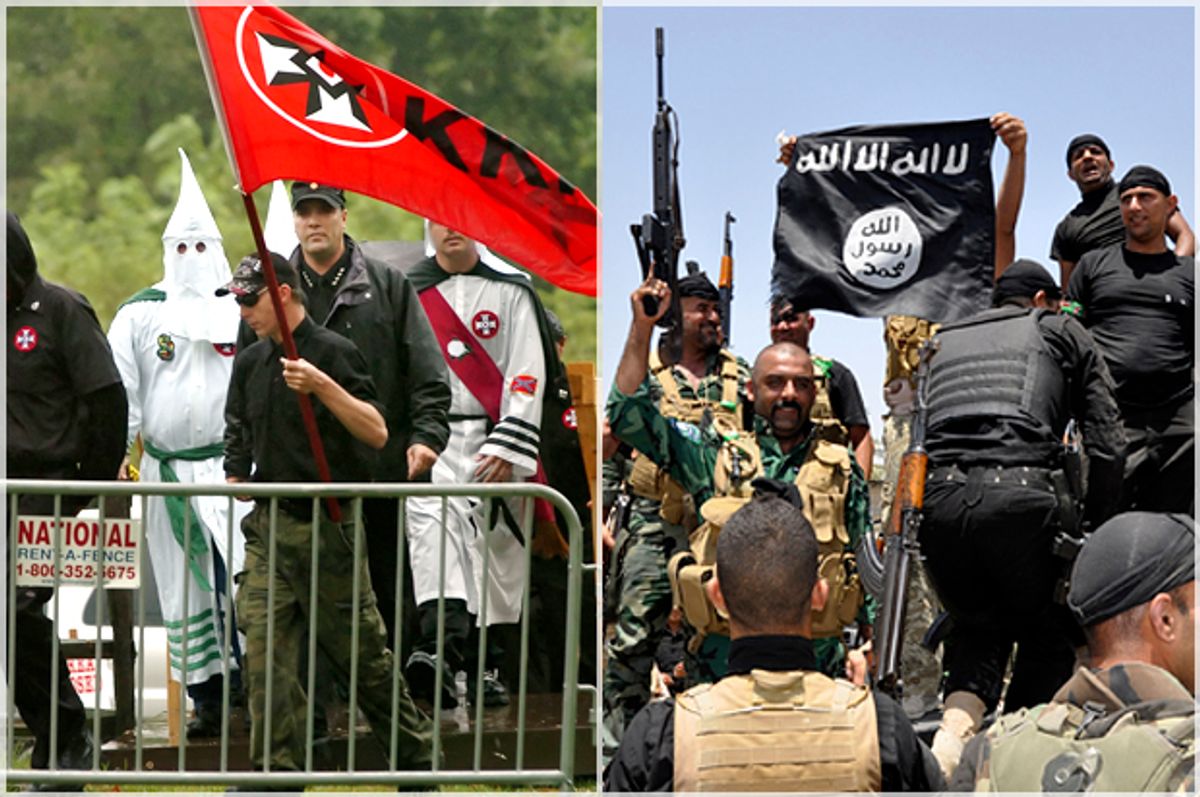 That’s the way the latest act of public violence – the shooting, by white supremacists, of five Black Lives Matter protesters in Minneapolis last night – has worked out. Black Lives Matter Minneapolis has called this an act of “domestic terrorism.” But it’s harder to find in the news media. What does the term "terrorism" mean in the lingua franca?

We spoke to media critic Todd Gitlin, a professor at Columbia University and longtime writer on the counterculture, about the phenomenon.

Another shooting – white supremacist this time. Why are we – the news media, at least – not widely describing them as terrorists?

You should ask them! But I can surmise – they have "terrorist" located as a compressed way to say Islamist-jihadist-enemy of America. If they know that there have ever been any other kinds of terrorists in America, that knowledge has gone down the memory hole.

I’ve been reading and writing on the Deep South in the early ‘60s, when black activists and others were pretty regularly being shot to death and burned to death and beaten up and abused in all kinds of ways. And my recollection is that even then the word “terrorist” was not ordinarily used. Look at the bombing of the church in Birmingham, Alabama, in 1963 and see if the word “terrorist” was applied. My guess is not very much.

The term "terrorist" came forward to refer to the Weather Underground and people like that.

It wasn’t just an ethnic distinction, then.

No, I think it was reserved for the left, then.

A terrorist is someone who used terror as a political instrument. Certainly the shooters in Minneapolis would seem to qualify. [Timothy] McVeigh and [John] Nichols were not trying to terrify so much as they were trying to destroy the state. I’m not sure of that.

There are times when the gang-banging militias would qualify as terrorists in a strict sense: They see the violence as a platform for their spiel… I think the Unabomber would qualify as a terrorist: He had a manifesto ready.

Certainly some of the right-wing and racist groups would qualify by any strict definition as terrorists. And the news media haven’t coded them that way.

There is a fixation about the terrorists of Islamist inspiration, and that was probably already true before Sept. 11, 2001.

What do the racists in Minneapolis want to do? One thing they seem to want to do is terrify the Black Lives Matter movement and drive them off the stage.

It’s certainly easier in the age of Internet and social media to use images of the destruction as mechanisms to incite fear and recruit terrorists.

It helps this practice of confinement of the term terrorism… It reinforces the idea that white American racism with violent equipment is somehow not exactly normal, but doesn’t need to be taken seriously as a social and political atrocity. It’s attributed to madmen.

I think that’s a fairly common right-wing trope. Like that guy [Jared Loughner] who shot those people in Arizona, including the congresswoman… The right-wing framing of him is that he was just a nut.

The point of the distinction is to leave undisturbed the presumption that people who resort to violence are left-wing or Arab or both.