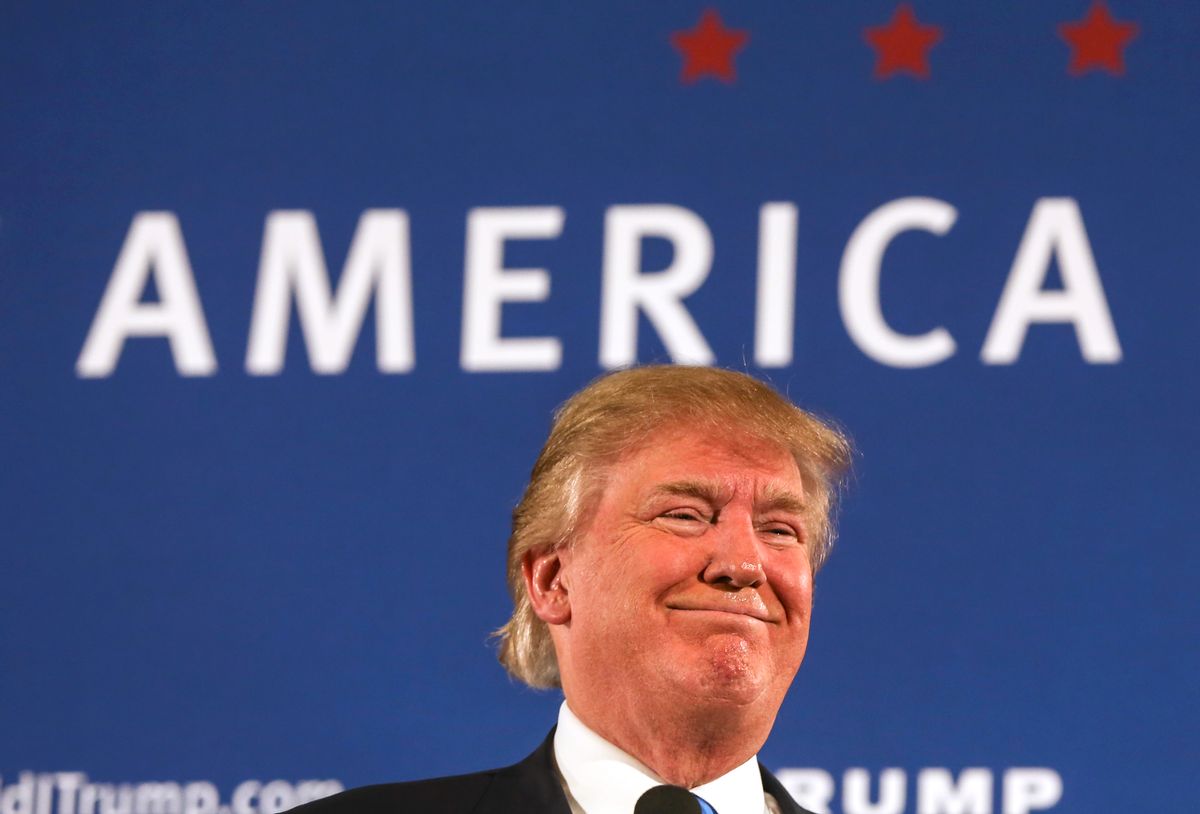 Facebook
Twitter
Reddit
Email
view in app
At first, you could perhaps give ordinary Republican voters some slack for supporting Donald Trump. He was loud and exciting and unusual. Some people were enthralled with the spectacle, and most people treated him like the joke that he seemed to be.
Of course I've been laughing at Trump for a long time. He's fun to laugh at. Or, at least, he was. But I've tried to take it easy on his supporters since, maybe, they don't know any better. That is no longer the case. At this point, his supporters all know better, and they've decided to stick with him.
They have stuck with Trump despite, or perhaps because of, the fact that his campaign poses real, physical danger for people of color, particularly for those who speak out against his message of hate. He has no problem lying about black people and Latino/as and Muslims in order to incite hatred. He does not hesitate to encourage violence against them. And even his supporters who have not engaged in violence, or who maybe even don't really quite support beating up people of color, should be held to account for the actions of those few. They have stood by and watched for too long.
For as long as Trump's campaign drags on, it will continue to normalize a level of explicit and violent racism that hasn't existed in the U.S. in decades, and which many have begun to find analogous to the beginnings of the Nazi movement. Walter Benjamin wrote in 1936 that "the logical result of Fascism is the introduction of aesthetics into political life":

"'Fiat ars – pereat mundus,' says Fascism, and, as Marinetti admits, expects war to supply the artistic gratification of a sense perception that has been changed by technology. This is evidently the consummation of 'l’art pour l’art.' Mankind, which in Homer’s time was an object of contemplation for the Olympian gods, now is one for itself. Its self-alienation has reached such a degree that it can experience its own destruction as an aesthetic pleasure of the first order. This is the situation of politics which Fascism is rendering aesthetic."

The term "fascism" should not be used lightly, as it often was during Bush's presidency and, by less informed people, during Obama's presidency. However, Trump's campaign is the purest example of the aestheticization of politics in the U.S., at least in the last few decades.
In this light, we can think of his campaign as the rational continuation of the Republican-led Congress of the last few years, during which Republican voters have found aesthetic delight in those moments when the semblance of democratic governance, with its grudging, slowly progressing acceptance of minority rights, appeared to be crumbling. They have waited impatiently for a leader who would seize executive power in the name of the oppressed-feeling white majority and reinstate a government by and for white people--Trump has promised them, if only implicitly, that he will be that leader.
It may seem like Trump has no chance at the presidency because of, you know, everything about him. However, we're just shy of a year away from that election, and many electorally important states, like my home state of Michigan, are in the hands of Republicans. They have a year to take away voting rights from the poor and people of color. They have a year to crush unions. They have a year to rig the way votes are counted to give majority-Democratic states over to the Republican candidate (remember: They were suggesting this in 2012, and if they had their way Romney would have been elected). However, even if, as Nate Silver argues, Trump has no chance, the endurance of his high poll numbers should still cause us alarm.
A plurality of Republican voters support Trump, and have done so for several months. It's time to stop excusing that kind of behavior. So let's be clear: If you support Trump, you support racist policies. You want to be led by an authoritarian, narcissistic clown who will say racist (and, of course, sexist) things to win your vote. You can no longer hide behind the always already stupid idea that Trump will, by way of ugly trucker hats, presumably, make America great again. Trump's America, far from being great, is a place where white supremacists feel confident, more so than at any other time in my life, shooting at black protesters, engaging in armed protests of mosques, calling for internment camps for refugees, beating up immigrants... the list goes on, and will go on. Trump is far more dangerous than anyone gave him credit for. He has tapped into a vein of hatred running through the white population of the U.S. And here we were, laughing at his hair.
I will continue to laugh at Trump, though, and I will begin to make a more conscious effort to laugh at his supporters as well. They have worked too hard at being ridiculous not to have earned some ridicule. But I will no longer be laughing because I find Trump funny. I will laugh because I think it's a valuable tool for isolating individuals who hold dangerously stupid ideas. Dante wrote of laughter that it is "a sparkling of the soul's delight, a light appearing without according to what is within," but I certainly find no delight in the normalization of white supremacy in America. Nor is this the detached lightheartedness of Chaucer's Troilus, ascending into heaven and laughing at our woe. Rather, I think of laughter, in this instance, in the way that Umberto Eco writes of it: as William of Baskerville says in "The Name of the Rose," "to undermine the false authority of an absurd proposition that offends reason, laughter can sometimes also be a suitable instrument. And laughter serves to confound the wicked and to make their foolishness evident."
(Possible campaign slogan: "President Trump: An Absurd Proposition that Offends Reason.")
And so, this Thanksgiving, millions of white people like me will continue that other tradition, of joking with our friends about our Racist Uncle who watches Fox News and supports Whichever Horrible Politician is popular that year. But when we're actually with our family, and the Racist Uncle (or Grandma, or Cousin) starts talking about how those refugees are actually ISIS turr-rists, we might just step out of the dining room to grab another beer, or offer to clean up dishes, or go play with the kids. We might avert our eyes, or change the topic. We laughed at the "SNL" video of family members lip-syncing to Adele, but chances are many of us will simply become awkward and quiet when those same topics come up at our own tables.
But what if this year, we laughed instead? I hate the idea of promoting rudeness toward one's family, and I tend to avoid confrontation in general, but I also don't think our feelings matter so much when compared to the safety of our fellow human beings. When you hear that dreaded yet almost inevitable statement, "you know, we need someone like Trump in office," or some variation thereof -- just laugh. Laugh at the idea, and at the person expressing it. You could try to reason with them, but that could drag on for hours with little effect. A moment of pointed laughter, on the other hand, communicates all that needs to be said. And if anyone might object to your indecorous behavior, just tell them that, as a great man once said, "I don’t, frankly, have time for total political correctness. And to be honest with you, this country doesn’t have time, either."

Joe Montgomery is a writing instructor at Eastern Michigan University