A holiday bound in myths, and based on America's founding sins, arrives in the middle of a fraught conversation 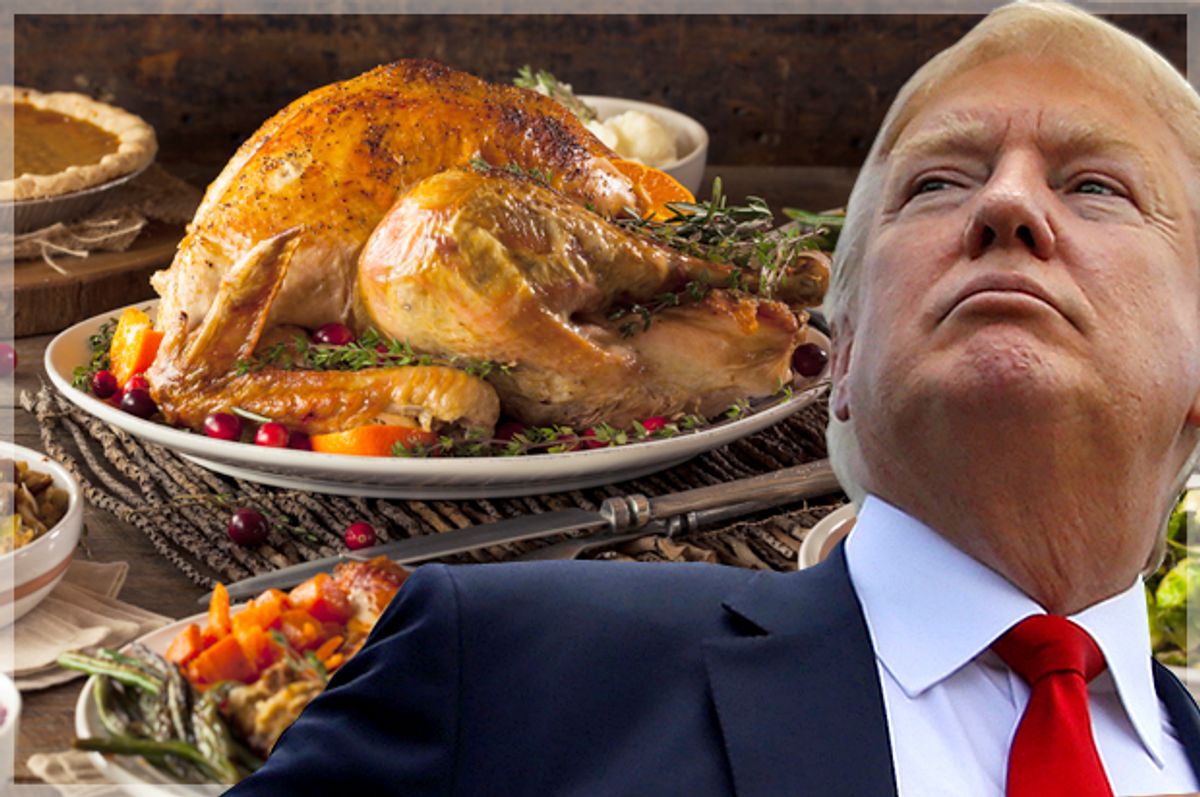 Public holidays are a type of ritual. They are a means by which individuals learn lessons about politics, identity, family and community. Holidays are also a type of habit. They're part of a cultural routine, one that is usually followed without much reflection, contemplation or introspection.

Thanksgiving is a holiday ritual that celebrates family and community. In recounting one of the country’s founding legends—in which Europeans fled religious persecution, escaped to the “New World,” and then were helped by friendly “Indians”—the American people are supposed to reflect upon their blessings, fortunes and good luck.

Like most national holidays, Thanksgiving is a myth. It does the powerful political work of encouraging American Exceptionalism: a belief that the United States was preordained by “God” for a special place among all others; and that it is a “shining city on the hill.”

In reality, the arrival of the Mayflower (and other European explorers and colonists in the “New World”) would help to set into motion two of the greatest crimes in human history: the genocide of First Nations peoples and the enslavement and mass murder of black Americans. Stolen land and stolen labor are the twin bedrocks of American empire. Their influence was (and remains) so profoundly deep that it would take a civil war (what was really a second American Revolution) and then 100 years of additional struggle to strike down white supremacy as the formal public policy of the United States.

First Nations peoples can never be made whole for the land (and lives) that was stolen from them. Black Americans will never receive their reparations, be it 40 acres and a mule, or redistributive justice because of the material harm done to them by white supremacy from Jim and Jane Crow and in the present. These inequalities are now fixtures in American social and political life. There is no holiday that can repair those harms.

(One should not overlook how Thanksgiving was a source of political controversy during the American slaveocracy. The South refused to celebrate Thanksgiving because it was viewed as a way for “Abolitionists” and “Yankees” to undermine the institution of white on black chattel slavery. Thanksgiving would be fully embraced as an “American” holiday after the end of the Civil War when apartheid was reinstated across the South after the fall of Reconstruction. White America could celebrate Thanksgiving as one nation only when black American citizens were denied their equal rights.)

In many ways, Thanksgiving is a celebration of gluttony, sports, nationalism, militarism and waste. While some of the poor and homeless may be fed for a day, the institutions and structures that create income inequality and joblessness remain untouched. The day after Thanksgiving is called “Black Friday.” It is a festival of consumerist excess and greed. It is one of many moments throughout their lives when the American people are told the lie that “freedom,” “capitalism” and “democracy” are interchangeable. In reality, the gangster and casino capitalism of late 20th and early 20th century America is incompatible with a true “We the People” democracy.

This year’s Thanksgiving comes during the midst of a national debate about America’s national character.

Young people and others are protesting for progressive social change at America’s colleges and universities, participating in Black Lives Matter, and standing up against police thuggery and violence in cities like Ferguson, Missouri, and Baltimore, Maryland. The Confederate Flag, what is more accurately described as the American swastika, has been removed from some government buildings in the old Confederate South. Buildings, streets and roads that bear the names of white supremacists are being renamed.

Conservatives and other reactionaries have resisted. History and social change work is a story of “push and pull” factors, thesis and antithesis. Right-wingers in Texas and across the country are rewriting school textbooks with the goal of quite literally “whitewashing” American history, where any facts that undermine their lies about American Exceptionalism, and the many distortions needed to maintain the illusion, are removed.

Authoritarianism has increased among the American people. The Republican Party is actively using the courts to roll back the gains of the civil rights and women’s rights movements. The extreme rightward shift of the Republican Party, as signaled by the rise of Donald Trump and his overt racism and Know-nothing nativism, is a symptom of a white working and middle class that is terrified of demographic change and losing any of the unearned advantages that have historically come with being “white” in America.

This second group consists of those people most likely to be angry at any criticism or truth-telling about the lies and myths of Thanksgiving, to claim “Gun, God, and the Flag” as their life mantra or bumper sticker, and to tremble with a mix of rage and fear at the thought of either Syrian refugees or Hispanic immigrants coming to “their Christian country” — or God forbid, a black man being elected president of the United States twice.

These reactions, most often from conservatives and right-wing authoritarians, but shared by other Americans too, those crippled by nostalgia, or who view American Exceptionalism as religion, are driven by fear. Human beings have finite lives. Because they are not immortal, their identities and sense of self seeks out crutches and fixed points of support to compensate for a fear of death. Because religion, nationalism and public rituals have existed for millennia and centuries, far longer than the life of a given person, they provide some defense against those anxieties.

Thus, when conservatives talk about politics, values and history, they are desperately trying to both “conserve” their own imagined material resources and power against some perceived threat, as well as working to “conserve” the symbolism and memory of the past because it sustains their own sense of self in the present.

This year’s Thanksgiving also takes place in the shadow of terrorism by ISIS, creeping authoritarianism and fascism from the Republican Party, environmental catastrophe, an economy that remains stagnant, mass shootings, right-wing domestic terrorism, and police who treat America’s poor and working-class black and brown communities like battlefields, and its residents as enemy combatants.

This is the culture of cruelty and the neoliberal nightmare as a quotidian state of affairs. Maintaining one’s mental health is something to be grateful for in these times.

But change will not come without radical dreaming (and action) about the potential for a better life and a more humane, just and democratic American society.

In America’s current state of political disorientation, where millions of its citizens are barely surviving, and the vast remainder are experiencing vastly diminished life chances, income and opportunities as compared to the generations that preceded them, perhaps being “thankful” is actually a condition of surrender and learned helplessness. Ultimately, the 1 percent and the plutocrats want “thankful citizens” because they are compliant and obedient.

On Thanksgiving, the American people should, instead of being thankful for what they have--and by doing so playing along with a tired mythology of American genocide and slavery--inaugurate a day of political activism and resistance.

Instead of gorging on unhealthy food and watching football, it would be a truly meaningful Thanksgiving holiday if people stopped being thankful, got really angry, confronted power, and then fought and struggled to remedy the injustices in American society.