The best Friendsgiving on TV: "Living Single" made spending the holidays with your chosen family fabulous 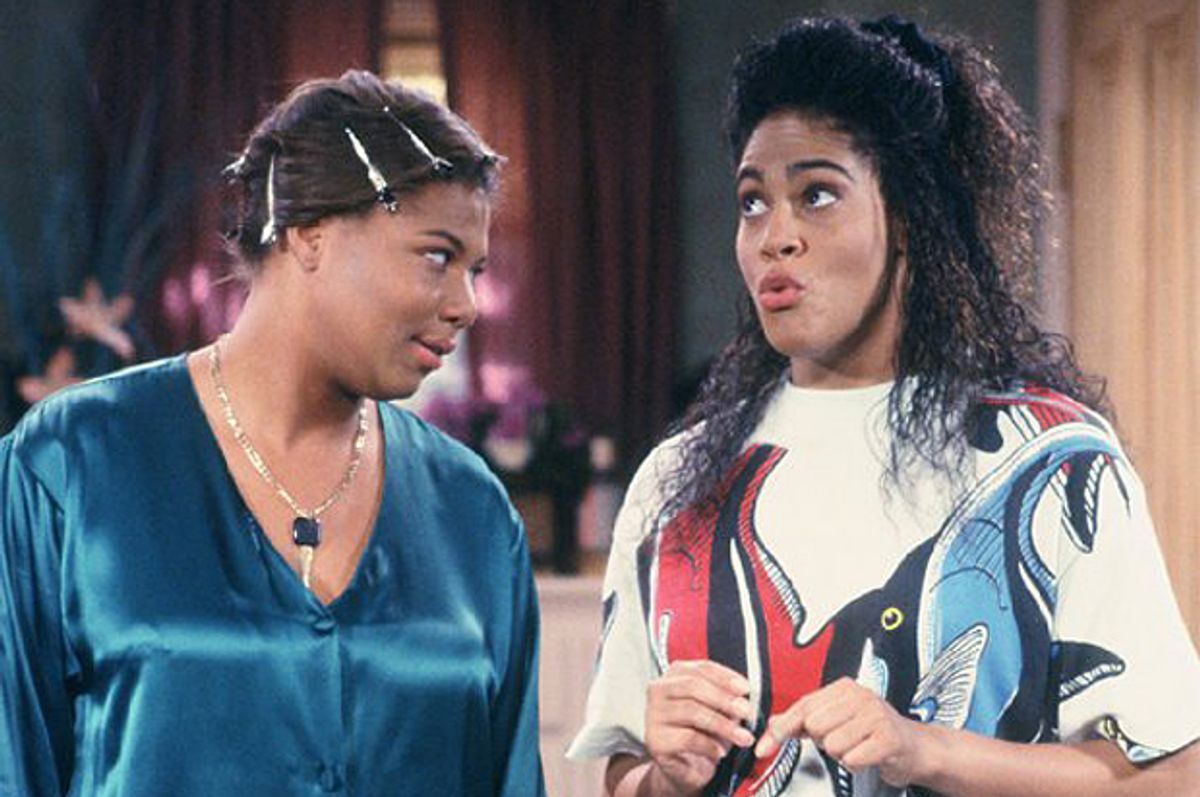 The popular term “Friendsgiving” may not have originated on the hit ‘90s series "Living Single," but a quick revisiting of two hilarious and emotionally compelling Thanksgiving episodes makes it clear that no other show can provide a better example of the true meaning of this spin-off holiday. More than two decades after they first aired, "Thanks for Giving" and "Love Takes a Holiday" (you know you love those horrible titles) still hold up against the sitcom specials of today, for being bold, feminist and surprisingly realistic about romantic conundrums—just like the series itself. It's true that “Bob’s Burgers” remains the king of Thanksgiving TV events, and “Scandal” may have recently earned the title of Most Daring Christmas-themed episode of all time, but nobody (no, not even “Friends”) can do Friendsgiving like Maxine, Khadijah, Regine, Synclaire, Overton and Kyle.

Season 1's "Love Takes a Holiday" remains iconic for one special guest appearance in the form of Nia Long as Stacey Evans. (Please see “Boyz N the Hood,” “Friday,” “Love Jones” and Jay Z's infamous quote to fully grasp the cultural significance of Ms. Long.) Stacey’s a talented photographer, but her work at the magazine has been suffering due to a recent breakup, and Khadijah attempts to cheer her up by inviting her out on a girl’s night, and then to Friendsgiving dinner. Things, unfortunately, go left—as they always must—when Stacey and the incomparable Kyle start hooking up. In a refreshing turn of ‘90s-kinda-girl events, Stacey has no problem explaining to her friends that she is just looking for some rebound loving, but Kyle is head over heels and already making plans to take her home to the family for Christmas. He’s devastated when he learns the truth.

But what's unique about the plot—even today—is that it's the women of the series (led, oddly enough by Kyle’s eternal nemesis Maxine) who intervene in an act of true solidarity with their friend, and demand that Stacey break things off. They're all for her getting her swerve on, but not at the expense of a friend. This Friendsgiving episode is of particular import to “Living Single” fans, as the final scene hints at the future, incredibly bizarre and entertaining relationship (or “situationship”) between Max and Kyle.

Season 2’s "Thanks for Giving" doesn't have Nia Long, but we are graced with the presence of the late, great Heavy D (and a don’t-blink-or-you’ll-miss-it Deion Sanders cameo as well). The girls are slightly less single this time around, and there's even talk of a possible proposal from Khadijah’s longtime boo Scooter.

If for some reason you're forced to choose between watching only one of these two highly entertaining examples of Friendsgiving (both available on Dailymotion), you'll want to watch the Season 2 event for a myriad of reasons. If you've been on Twitter in the past day or so, you may have noticed that #ThanksgivingWithBlackFamilies is trending. Similar to, though possibly more hilarious than, the unforgettable tales #GrowingUpWhileBlack wrought a few months back, the point of the hashtag is to celebrate all of that which makes Thanksgiving an especially entertaining time for so many of us. "Thanks for Giving" opens with one of the most #ThanksgivingWithBlackFamilies-esque moments ever to air on TV, in which Sinclair is on the phone, getting the much-coveted family marshmallow and yam casserole recipe—because you can’t have a proper Friendsgiving without your girl’s mama’s “yamallow.” And as the girlfriends debate about whether or not Khadijah is finally getting a ring (spoiler alert: she’s not), Maxine delivers some of those one-liners that made her unique brand of cynicism so heartwarming:

“Kadijah, you're having a good relationship and good sex. Why would Scooter wanna wipe all that out with a proposal?”

And if he does propose?

Later in the evening, the men gather ‘round and play congregation as Kyle “preaches” about how, on this Thanksgiving, they all must make a pact to reclaim their manhood in the face of the women who seek to destroy them. Meanwhile, the women try to talk Khadijah down from freaking out about Scooter taking his dream job in Tokyo. We watch in awe as our favorite tough, independent lady stomps on the floor, whining, “I want my man stayyy!”

It’s another hilarious moment that’ll make you long for the good ol’ days. Yes, we have shows like “Scandal,” and “Empire,” and “black-ish,” and we’ve had popular sitcoms like “Friends,” or women-centered series like “Sex and the City,” and, now, “Being Mary Jane.” But no show has ever pulled all these powerful elements together (comedy, big city living, black characters, sex, love and feminist ideals) like “Living Single” so effortlessly did. Even in 2015, it’s rare to see on television a group of well-written women characters who are working but not rich, single but not consumed with a manhunt and, though flawed, almost always down for their friends.

The obvious and overwhelming consumerism of the holiday season is now openly critiqued (to little avail), but few acknowledge that this is also the time of year where there’s this insistence that people must spend their holidays surrounded by The Family. And those who don’t have big, familial traditions, and generations of cousins with which to surround themselves, can feel a real isolation from it all. The presentation of Friendsgiving as this totally organic element (as opposed to those grand, and oftentimes forced holiday episodes) on a show like “Living Single” was and is one more reminder that, while blood may be thicker than water, there’s something to be said for the people we choose—and are not obligated—to break bread with.