The conservative freakout over Thanksgiving debates: Here's why the right is melting down this time

Every year, a flurry of articles about "winning dinner table debates" go out. This year, right-wingers caught wind 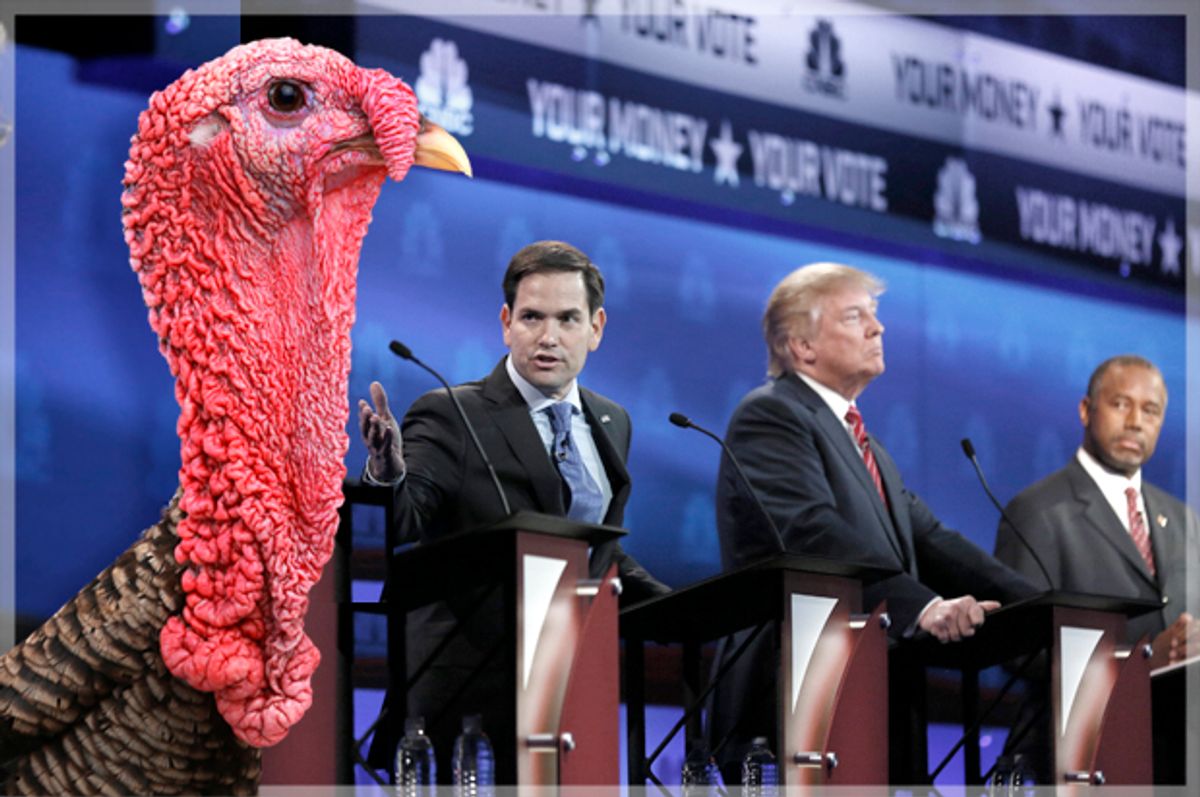 The Thanksgiving holiday seems like one of those rare occasions in American life where virtually everyone shares a similar experience, the traditions of the family gathering, the food, the football, the sometimes contentious discussions among people who love each other but nonetheless have different worldviews and political beliefs. It's become something of a cliché, in fact, with an annual flurry of tongue-in-cheek articles in newspapers and other publications giving advice on how to handle that obnoxious uncle's unpopular opinions at the Thanksgiving dinner table.

And yes, these articles are usually aimed at liberals trying to deal with that drunken Limbaugh-listening relative who insists on baiting everyone at the table by going on about the pet right-wing outrage of the moment and passing on talk radio propaganda as if it had been delivered directly from God. These stories are so ubiquitous that it's fair to assume this must be a fairly common experience.

It's undoubtedly also true that conservative families often have to deal with the college kid who's home for Thanksgiving break and decides to regale the table with her newfound knowledge that everything they believe in is the result of corporate brainwashing and that Ayn Rand turns out to be a fraud. These days there will likely be a lot of talk at those tables about trigger warnings, cultural appropriation and safe spaces, all things that will sound to the drunken uncles as if they are being discussed in a foreign language. (National Review would-be humorist Charles C.W. Cooke tried to tackle this last year with mixed results.)

The difference between these two phenomena is best illustrated by the massive whining and tantrums that result from any joking around about it. And no, I'm not talking about the college kids. Yes, they might get frustrated and call their parents "haters" and flounce off to their rooms, but they are, after all, still kids.  No, the people who are hysterical over this are conservatives who have worked themselves up into a full-blown hysterical meltdown over it.

This year, the Democratic National Committee put together a funny little website called "Your Republican Uncle" in which they use this annual holiday trope as a way to explain some of the issues important to Democrats in a mildly amusing format. Evidently, the right has been unaware up until now that Democrats don't agree with them, because this clearly hit a very sensitive nerve. Even as they dismiss it all as inane folly, they went to incredible lengths to angrily debunk the "talking points" in lengthy blog posts on such major websites as Hot-Air, where chief writer Allaahpundit was spitting mad:

The takeaway from these sites is that liberals are so cloistered from interaction with conservatives and so insecure in their own basic political beliefs that they actually need to be prepped before the most basic social engagement with the enemy. If you think that’s a good look for your movement, you do you.

I'm fairly sure that he's taking this a lot more seriously than any liberal takes it. But he wasn't alone on his righteous indignation. Conservative blogger Ace of Spades wrote an entire treatise on how to deal with the miscreant liberals in your family when they use any of these "Vox explainer" talking points. It's very elaborate and very, very serious:

I herewith humbly submit these first sketches of a new branch of Lifemanship I call "Thankgivingmanship," which I define as the gentle art of insulting the stupid without alerting them to the fact that they've been insulted at all.

It is the goal of the dedicated Thanksgivingman, then, to achieve the sublime art of giving offense without offense being taken.

My basic strategy is thus: It would be as rude of you as it is rude of your cretinous grownchildren kin to allow a Thanksgiving dinner into a stupid game of Rachel Maddow Talking Points and their rebuttals.

So, rather than confront the unemployed idiots who will be assailing you, I propose instead to superficially avoid conflict and engagement on their dummy mouthflappings, and appear instead to agree with them.

But -- and here is the point -- a skilled Thanksgivingman will only appear to agree with the grownchildren to feeble intellects, such as those possessed by the grownchildren themselves. Instead of disagreeing with them -- which will cause argument and anger -- you will instead claim to agree with them, while in fact contradicting them, subverting them, of baffling them with statements that nearly, but do not quite, make sense.

As I said, it's all very elaborate. He goes on to lay out a complicated set of tactical arguments designed to tie the foolish liberal up in knots. It is obviously something that merits a lot of serious thought and preparation. Clearly, it's extremely important.

But nobody is more intent upon taking up the momentous challenge of the Thanksgiving liberal talking points conspiracy than the man who says his talent in on loan from God, Rush Limbaugh.

Limbaugh was hopping mad about all this on his show yesterday and he didn't mince words. He went on for about half an hour on the subject, very upset and disturbed by what these liberals are doing to the institution of the family:

"You know, in all seriousness, these New York Times, Washington Post, DNC websites, take a look at what they're really doing here. You have a holiday here where families are getting together, and for the most part everybody just wants to enjoy it and have a good time. I mean, I know that your average family, there are people in every family that really don't look forward to it and resent other members. Families are families. But here you have the Democrat Party and its media allies actually helping people prepare for stress and battle and war and so forth."

The humanity. But in the end he bucks up the troops with a good old-fashioned Limbaugh pep talk:

"I think these poor little DNC, Washington Post, New York Times readers are gonna be so woefully ill-equipped and unprepared to deal with Rush Limbaugh listeners at Thanksgiving, that it's gonna ruin their day, 'cause they're gonna show up thinking that they are loaded for bear. They're gonna show up thinking that they've got all the ammo they need and that their conservative relatives are a bunch of hick, hayseed kooks, but they've been to the New York Times site and the Washington Post site and the DNC site and they are fully armed, ready to go. They've got all the facts to dispute everything. And the typical Rush Limbaugh listener is going to be able to have them confused inside of 20 seconds and ruin the day for the whole family..."

In the spirit of the holiday and the beautiful traditions of family and shared American values, to conclude the segment Rush extended the hand of friendship and comity:

"You know, stop and think. How insecure must today's liberals be to have to send out a little bunch of brown shirts to Thanksgiving dinner all over the country? I mean, that's what they're doing, all these advice pieces in the New York Times and the Washington Post and the DNC website on how to deal with these nutcase conservatives in your family. Little brown shirt propagandized."

Conservatives love to portray liberals as being thin-skinned and humorless with all their political correctness and whatnot. But if there's one group conservatives adamantly insist must never be mocked, not even in the most lighthearted and insubstantial way, it's ... conservatives.

Maybe they should take the advice they like to dispense to everyone else and lighten up. It's Thanksgiving, guys. Relax. It's just a joke.