We could black out Black Friday: I dream of a national boycott that demands black lives matter as much as black money

Boycotts like #NotOneDime come at a cost, though, to people already struggling on the edge 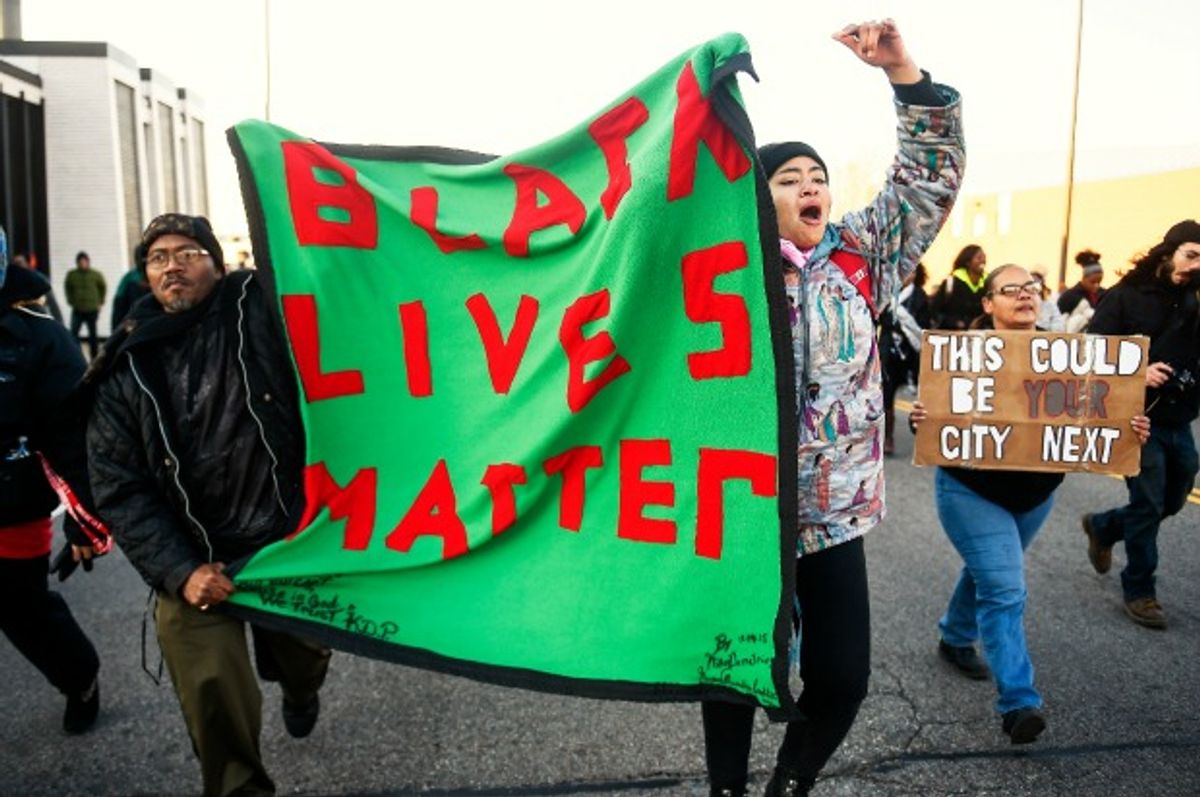 There’s nothing like a good, ol’ fashioned consolation prize. For years, I thought mine was Sarah Lawrence College. At about $50,000 yearly tuition, I would never have been able to attend, had my mother lived to help me fill out the FAFSA during senior year in high school. As a professor and mother of one, she likely would have made too much for me to receive a significant amount of aid. But she didn’t live to see me graduate and, since she was a single woman when she adopted me, I was considered an independent when I applied for grants. Over the years I still wracked up quite a bit in loans, but ultimately, I attended one of the nation’s most expensive colleges at quite a steal. It was like Black Friday for higher ed. But I wasn’t always grateful, because it felt like a trade-off, an apology from the world, or the system — sorry about that whole cancer thing, here’s a cheap ride to your dream school because, legally and financially, you’re alone in this world. I know what I would have chosen to have, if it had been up to me, but that choice only exists in my fantasies. In reality, sometimes we must accept the consolation prizes we are given.

But other times, we should reject them wholeheartedly.

Black Friday, Cyber Monday and every sale that you will see advertised from today until the new year are, in many ways, consolation prizes. The people who have not been able to afford certain material things for most of the year will (instead of having their wages increased, their rent lowered or their medical expenses covered) get a chance to buy some things they may or may not need. Those things will at least, most likely, make them feel good, if only for a moment or until next year when there will be more things. This consolation prize is especially useful for those many members of black communities who have borne witness to or experienced things like brutality from those sworn to protect and serve them, failing educational systems from which they cannot afford to remove their children and/or the unjust incarceration of a loved one. For these people, especially, material things they typically cannot afford are a temporary salve for deep and intricate wounds. In other words, retail therapy remains a hell of a drug.

But in seeking such therapy on this weekend in particular (or, in the case of those who feel they are truly just shopping out of holiday tradition, or in the name of giving—in giving this great boost to the American economy) what are black people, and others who believe that black lives and minds matter, really saying with their dollars? What are we—whether we want to admit or not—accepting from a society that asks us to keep spending our money, but doesn’t make the most basic human rights a priority?

The recent protests on college campuses have given us more proof (as if we needed it) that money, and not necessarily justice, talks. Even if you disagree with the message or method, it has to be acknowledged that the Mizzou protest was incredibly effective. Are the students now free to learn in an environment without any racial bias? No, and indeed the “now what” question is already being posed. But, initially, one of the main goals was to remove President Timothy Wolfe, and in that they were successful. They were not successful because student protestors were suddenly being taken seriously by the administration, or because Jonathan Butler’s hunger strike made them aware of how important the issues were. While all of these elements were necessary and not without their own powerful effects, demands were only met when money was on the line, in the form of the school’s football team strike. And as Steve Almond explains in a recent Salon piece on why all football players should strike, it speaks to the incredible political leverage athletes have—though whether or not more of them will go on to risk their careers for social justice is another matter altogether.

Taking such risk is no small thing. Much has been written about the systems set in place to make it difficult or impossible for black Americans to obtain financial stability, let alone wealth. The school-to-prison pipeline is becoming a bigger part of the conversation, with writers like Ta-Nehisi Coates taking on the history behind mass incarceration, VICE’s “Fixing the System” special with President Obama and Bernie Sanders openly (and consistently) declaring war on the prison industrial complex. But it’s equally important to consider the unique psychological effects on those who have “made it,” because those effects determine how black Americans spend their money, and how they do or do not use it as a means of protest. ESPN’s “30 for 30: Broke” documentary offered an excellent analysis of how this psychology affects (and often destroys) athletes when they first come into money. Otherwise, practically every popular rapper ever has a catalogue full of lyrics that make it easy to understand how the shock of going from nothing to something, or from nothing to millions can cause irreversible damage. “Mo Money, Mo Problems” is especially true for those new to money, and to those who might have suffered a great deal before seeing it. Simply telling people, “Save your money, and invest in your community,” is not a solution, especially when Jacob the Jeweler makes house calls. And traces of these same effects can be found in people with far less money; people who go from not being able to afford a flat screen or good winter boots, to suddenly being able to get them—but for one weekend only!

I’d hoped to write an article that would, in essence, call for every person who has used the #BlackLivesMatter hashtag this year, or any of the hashtags of slain unarmed men, women and children to boycott Black Friday. I wanted to highlight the campaign #NotOneDime, a coalition headed by social activist and writer Rahiel Tesfamariam, which calls for a cease on all non-essential shopping from Black Friday through Cyber Monday, and even offers holiday shopping alternatives with a directory of black-owned businesses. They have a platform and a list of specific demands for corporations. Another group, Blackout for Human Rights is, once again, calling for a #BlackOutBlackFriday national boycott. Last year’s initiative raised awareness, in part due to participation from Jesse Williams and Russell Simmons, but they are naturally hoping to make a greater impact this year.

But this is easier said than done. For some of us, boycotting Black Friday and/or Cyber Monday does not require a major sacrifice. But there’s a reason people wake up at 4 a.m. to buy things; the reason is, for many, poverty. Again, these sales are not for the wealthy or the well-off, or even those who exist in some state of financial stability. If you can, throughout the year, take your kids to the movies and buy them the clothes they need and the toys that they ask for—to a reasonable degree, and without going completely broke—Black Friday might be something in which you participate, but your entire holiday season isn’t dependent on it. But if you can’t do those things consistently, it weighs on you. And huge sales at the end of the year prey on the very real emotions of people in these situations. In other words, a Gap, Target or Walmart ad for 50 percent off is not just about the money; it signifies a mythical redemption for many parents—some sort of second chance to do right by the people they love, as if their inability to buy these things throughout the year is due to their own failings, and nothing else.

If you are going to ask black people to stand behind Black Out Black Friday or Campaign Zero or other movements demanding, among other things, that the routine, casual and state-sanctioned killings of black people by police be stopped, through boycotting the biggest shopping days of the year, there must be an acknowledgement that this may, at first, sound more like a punishment, another struggle they must endure.

A 2015 Nielsen report places black Americans on trend to have a buying power of $1.4 trillion by 2019. It’s difficult, and not in my scope, to say what a longterm plan for that power would look like. But what such power would look like—were it to be wielded collectively, as opposed to by a few individuals here and there—for this upcoming weekend is exciting. I fantasize about black people using that buying power to say, if nothing else, our money matters. And if our money matters to the American economy, then so should our lives, and so should our minds.

But like Almond’s vision of football players-turned-activists, it’s a longshot. Why should the people who have had to work so hard to get where they are make more sacrifices because—to quote Claudine Rankine—“white men cannot police their imaginations?” Why should people who live paycheck-to-paycheck all year, who look forward to finally getting a slice of this alleged American pie (if only for one weekend a year) put aside their desires, for a movement whose successes are difficult to measure?

Right now, we consider it some sort of win that video of Laquan McDonald being murdered was finally released, after 400 days and multiple attempts to block that release from the likes of State’s Attorney Anita Alvarez and Mayor Rahm Emanuel. It’s beyond disheartening that part of the “win” means we must have his death played on a loop (even turned into a GIF by one media outlet, which later apologized), and to know that his murderers will most likely serve no time—and still, we believe something has been achieved.

How do we ask people to delay a certain, immediate satisfaction for a future, but also partly imagined, freedom or agency? These are not the days of the Montgomery Bus Boycott. Every single black person is not convinced of the current movement, and that’s partly because, like Black Friday shoppers, they have been pacified by various pleasantries or feelings of accomplishment. But we cannot continue to accept these consolation prizes without interrogating the ultimate costs if, as activist DeRay Mckesson often declares on Twitter—we will win. Consolation prizes can come in the form of Black Friday Sales (which people go broke trying to take advantage of), or as black women on TV and winning Emmys (while the film industry ignores them) or black Presidents (whose very existence seems indicative of miraculous political strides, but who still must function within a system of rules that were written long ago).

Unlike a young woman losing her mom to cancer, and benefiting academically and perhaps professionally in some strange way, a person with money — however short or long that money may be — who believes black lives and minds matter has a choice in accepting consolation prizes or material pacifiers from those in power. And if we take nothing else away from Mizzou, we should know by now that power is just as relative as any other notion. Those who appear to have it will yield, when those assumed to have the least agency (i.e. football players or holiday shoppers) start to make their money talk.