America's shameful & incoherent fear: Why our rush to demonize refugees is so disturbing

In the aftermath of the Paris attacks, the rush to speak out against refugees has been swift, and deeply disturbing 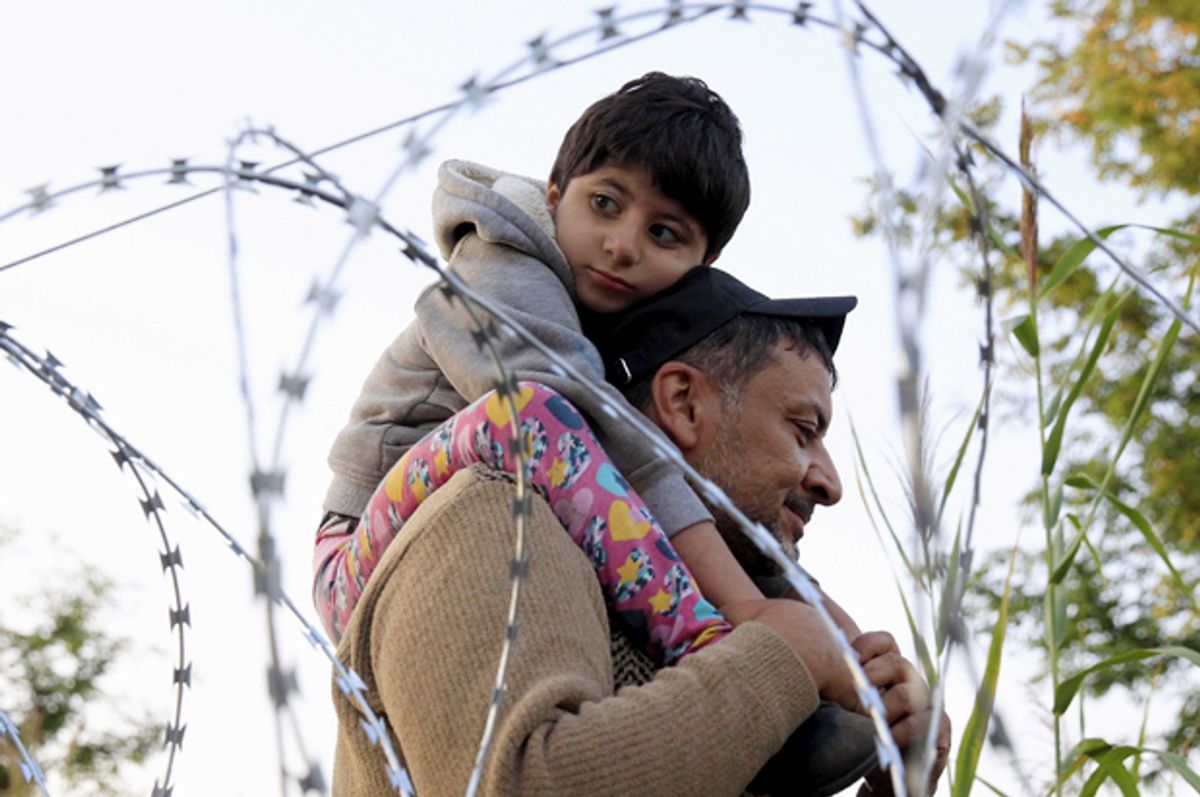 Two months after the bombing of Pearl Harbor, President Franklin D. Roosevelt signed Executive Order 9066. It ordered all Japanese-Americans to evacuate the West Coast and be sequestered in one of 10 internment camps across the country. Approximately 120,000 people were relocated, 60 percent of whom were American citizens. During this time, 3,600 Japanese-Americans entered the armed forces from the camps, as did 22,000 others who lived in Hawaii or outside the relocation zone. During WWII, the all-Japanese 442nd Regimental Combat Team won numerous decorations for its actions in Italy and Germany.

In 1944, the U.S. Supreme Court upheld the legality of the relocation order in Korematsu v. United States. By early 1945, Japanese-American citizens of “undisputed loyalty” were allowed to return to the West Coast, but it wasn’t until March of 1946 that the last camp closed. In 1988,President Reagan signed legislation that apologized for the internment and awarded restitution payments of twenty thousand dollars to each survivor of the camps.

The Mayor of Roanoke, Virginia, made headlines last week when he cited the use of internment camps for Japanese-Americans during World War II to justify his refusal of allowing of Syrian refugees to settle in his town.

After requesting that all Roanoke Valley agencies stop assisting refugees from Syria, Mayor David Bowers, a Democrat, wrote his rationale in a statement, saying,

"I'm reminded that President Franklin D. Roosevelt felt compelled to sequester Japanese foreign nationals after the bombing of Pearl Harbor, and it appears that the threat of harm to America from Isis now is just as real and serious as that from our enemies then."

Washington Gov. Jay Inslee (D) countered Bowers’ message about the impact of Japanese Internment in an interview with NPR, saying,

“My neighbors were locked up by the federal government and sent to camps for years while their sons fought in the Army in Italy and were decorated fighting for democracy. We regret that. We regret that we succumbed to fear.”

As of November 16, more than half of U.S. governors (31 of them) have asserted their unwillingness to allow Syrian refugees to settle in their states, with some taking Mayor Bowers’ lead and citing internment camps as a justified model for this moment.

“The internment (not a 'sequester') was not of Japanese 'foreign nationals,' but of Japanese Americans, two-thirds of whom were U.S. Citizens. I was one of them, and my family and I spent 4 years in prison camps because we happened to look like the people who bombed Pearl Harbor. It is my life's mission to never let such a thing happen again in America."

Speaking to reporters at a summit in the Philippines, President Obama said the “overwhelming numbers” of Syrians who are applying for entry to the U.S. “are children, women, families — themselves victims of terrorism” and reminded us that they are already subject to rigorous, often tedious and years-long, vetting by U.S. security agencies.

Before we get swept up in either the ahistorical xenophobia of arguments like Bowers’ or the pat response asserting those fears as unfounded, it’s important to understand what makes someone an immigrant, a refugee or an aslyum-seeker. These designations are significant in that they are legal classifications and determines a  country's obligations toward them.

According to the UN High Commission on Refugees, a refugee is someone who has been forced to flee his or her country because of persecution, war, or violence. They have well-founded fear of persecution for reasons of race, religion, nationality, political opinion or membership in a particular social group, and cannot return home without being in danger.

Immigrants, are often considered those who leave their home countries motivated by opportunities to work, study, or be with family. Though these distinctions are blurry in many instances that are not officially designated as persecution, war, or violence. In many instances, international economic policies destabilize developing countries, pushing people to leave in search of work and safety. Furthermore, U.S. and international laws don’t automatically grant refugee status to people fleeing violence or war. For example, many people leaving Central America for the U.S. leave countries with staggering rates of crime and violence, but are considered immigrants, not refugees. A person who is seeking asylum but has not yet received refugee status is called an asylum-seeker.

In 2012, the United States Department of Homeland Security (DHS) detained a record 477,523 people. In that same year, 29,484 individuals were granted asylum. All asylum seekers in the U.S. face mandatory detention while DHS’ determines if they face “credible fear” of persecution if returned to their home countries.

While Mayor Bowers apologized for his invocation of Japanese internment, the fear-mongering about Syrian refugees has continued in earnest. The impact of such fear is far-reaching -- more immigrants, including those who do indeed face credible fear, domestic violence, and persecution are currently detained than ever before, often held in inhumane conditions. Islamophobia and violence towards Muslim, Middle Eastern, Sikh and South Asian Americans is on the rise. In the more than 400,000 people detained by U.S. Immigration and Customs Enforcement (ICE) each year, are included: families, both undocumented and documented immigrants, survivors of torture, asylum seekers, pregnant women, survivors of domestic violence, and those who are ill without proper medication or care.

These are not the ones to fear.

The New America Foundation recently released statistics that show us the truth: Most terrorism incidents within the U.S. have been carried out by right-wing domestic extremist groups. Police brutality, targeting Black and Brown Americans, is both commonplace and extreme. According data from the FBI, violent crime rates in America continue their steady decline, while civilian deaths at the hands of police are on the rise. Perhaps, those are the numbers to fear.