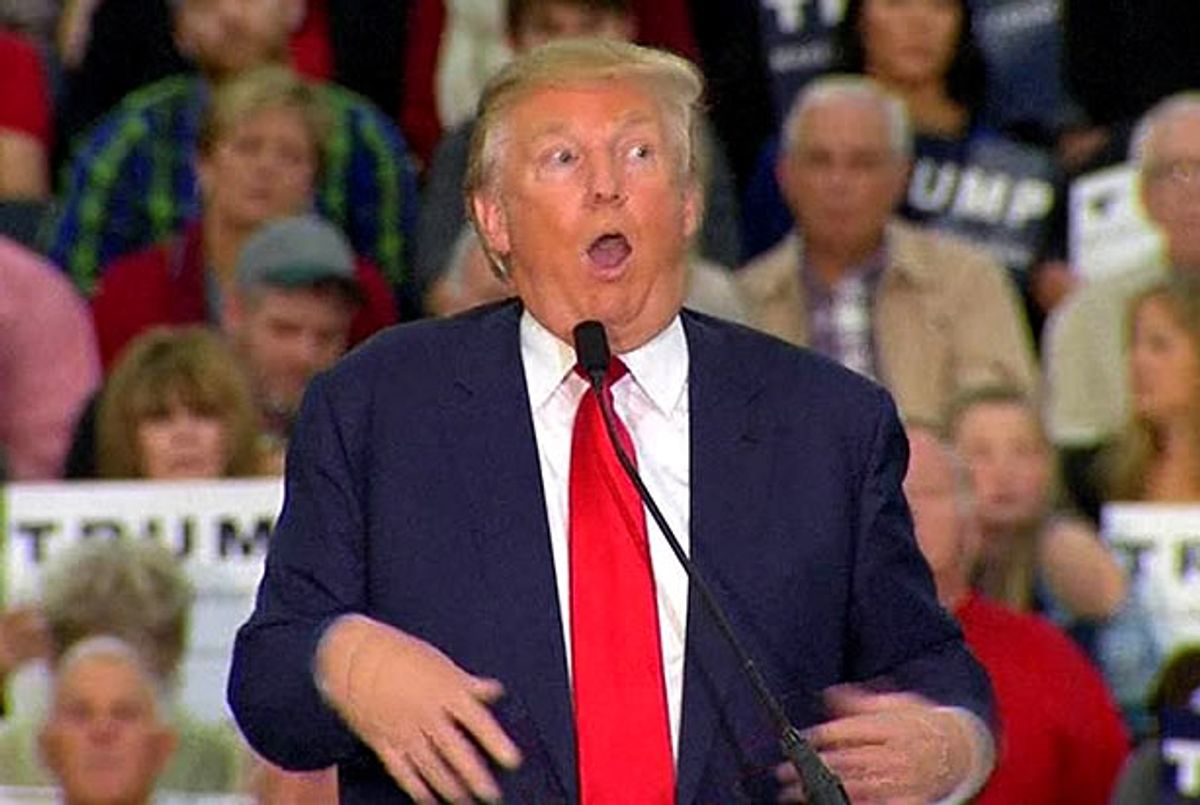 If Donald Trump wins the White House now, it will be impossible to forget that he did so, in part, because he persistently lied about American Muslims cheering 9/11 and used as evidence the reporting of former Washington Post reporter Serge Kovaleski -- a man whose work Trump so vastly respects that he openly mocked the reporter's disability before a crowd of cheering Republicans in South Carolina.

(The irony, of course, is that while there is no evidence that American Muslims cheered the events of 9/11, evidence now abounds that American Republicans not only cheer, but also support, a man who openly mocks people with disabilities. Not that his doing so should come as a surprise, mind you.)

At the event, Trump berated Kovaleski -- who now works for the New York Times -- for distancing himelf from a September 18, 2001 article in which he wrote that "authorities detained and questioned a number of people who were allegedly seen celebrating the attacks and holding tailgate-style parties on rooftops while they watched the devastation on the other side of the river."

Trump has been using this claim on the campaign trail as proof that "thousands and thousands" American Muslims celebrated the fall of the Twin Towers, even though the difference between "a number of people" and "thousands and thousands" isn't "a few" so much as "a few decimal places." Kovaleski told CNN as much, saying that he couldn't "recall anyone saying there were thousands, or even hundreds, of people celebrating."

In his speech Tuesday, Trump hooked his arms in front of his body and flailed around while saying, "now, the poor guy -- you've got to see this guy, 'I don't know what I said! I don't remember!'" The manner in which he curled and tucked his arms was a clear reference to the fact that Kovaleski suffers from arthrogryposis, a congenital disorder that limits the flexibility of his arms.

In a statement to the Washington Post, Trump claimed he couldn't have been mocking Kovaleski because "I have no idea who this reporter, Serge Kovalski [sic] is, what he looks like or his level of intelligence. I don’t know if he is J.J. Watt or Muhammad Ali in his prime -- or somebody of less athletic or physical ability." Which is an odd claim for someone who has "one of the all-time great memories," as Kovaleski covered Trump for the New York Daily News from 1987 to 1993.

When the New York Times condemned his crude impersonation of its reporter, instead of being chastised and humble like a human being caught mocking someone with a congenital condition would be, Trump lashed out at the Times on Twitter:

UPDATE: Trump has demanded the New York Times apologize to him for its criticism of Kovaleski, as he was merely making fun of journalists in general, not Kovaleski's condition in particular. He insisted, yet again, that he doesn't know who Kovaleski is. For his part, Kovaleski noted that "Donald and I were on a first-name basis for years. I’ve interviewed him in his office. I’ve talked to him at press conferences. All in all, I would say around a dozen times, I’ve interacted with him as a reporter while I was at The Daily News."