Malls of America: They may masquerade as public spaces -- but they just want us to shop 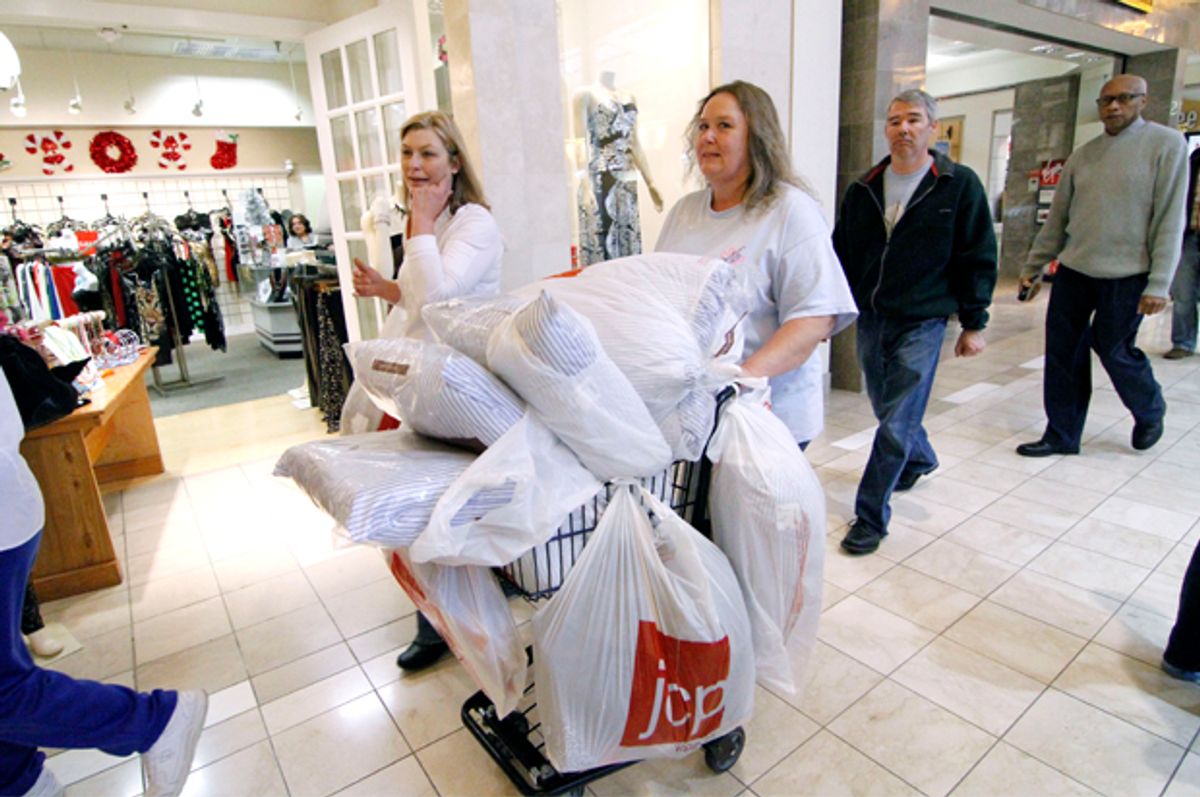 Not long ago, I discovered a man buried at the mall. This mall was not erected around him, as if preserving a sacred relic. He was placed there deliberately, his ashes interred beneath a brick fire pit, nestled amid bushes—surrounded by a parking lot. He looks out onto California Pizza Kitchen, Dick’s Sporting Goods and various other chain stores. Predictably, gangs of teenagers crowd around him on Saturday nights, to smoke, posture and ogle members of the opposite sex. In daylight hours, bored husbands slouch on the bench next to him, waiting on shopping spouses.

Presumably, the developers of this mall— “Hunt Valley Towne Centre”—meant it as an honorific to the man, Chuck Thompson, beloved broadcaster for the Baltimore Orioles for many years—famous for his catchphrase, emblazoned over the fire pit, "Ain’t the beer cold!" This arrangement has always struck me as strange, quite out of place—and nearly offensive. But why? It’s not uncommon to find prominent personalities interred in public places across the world, and throughout history. And there’s the rub: “Hunt Valley Towne Centre” is no public space at all; like any mall, it is a private space masquerading as public. This, I believe, has a lot to do with the apparent dissonance surrounding Chuck Thompsons’s final resting place—and ultimately, the disservice done to him.

Philosopher Hannah Arendt argues that the proper mark of the public realm, its essential lure and attraction for us, is its claim to permanence. We enter the public realm in search of a “guarantee against the futility of individual life.” This is something we all know and instinctively demand of public spaces, Arendt maintains, and I think it helps explain the motivations of the developers of “Hunt Valley Towne Center”—also why their efforts have failed.

In addition to honoring their resident celebrity, I suppose the mall’s developers hoped his glory might rub off on the surrounding edifice; perhaps his legacy might infuse this mall with similar endurance. But instead of honoring Mr. Thompson, the arrangement seems an affront, and Arendt exposes the problem: the gesture toward permanence made by the developers in this case is incomplete, feeble, half-hearted. They placed him in a veritable temple to the ephemeral.

Everything about the American mall is temporary. Chain stores replace one another in quick succession, according to the changing tastes of fickle consumers. “Hunt Valley Towne Centre” is poised for quick retooling, and is essentially a collection of big box stores embellished with garish signs and flimsy plastic trim—a wise decision by the developers, since the lifespan of the average mall is only about 20 years, after which time it needs renovation and reconfiguration to excite shoppers again. Mr. Thompson is hardly in a setting of requisite permanence. Indeed, it is easy to imagine that he, too, might be dispatched with other chain stores at any moment—or certainly when the mall needs to be reimagined all over again.

The mall aims to be the premier public space in our society, and indeed, it is the destination of choice for many when it comes to socializing. But there are signs it has overdone its welcome—that we have seen through its pretenses and false claims—and as the New York Times reported not long ago, many malls are dying. The mall is no public space at all, but wholly private. Many Americans were rudely reminded of this when, in the build-up to the war in Iraq last decade, several malls evicted patrons sporting antiwar T-shirts; they invoked their status as private property, and were not obliged to tolerate free speech at all. The mall does not want to serve as a public space—it just wants us to shop. But increasingly, that message is too indelicate for our ears. We want more from our public spaces—or our would-be public spaces, I should say.

To its credit, Hunt Valley Towne Centre tries to address that yearning. It is a formerly enclosed mall now reconfigured as a "Lifestyle Center"—essentially, a shopping center cast in the manner of an old-time main street retail district, complete with brick sidewalks, wrought iron benches and ornate lampposts. That customers tend to prefer Lifestyle Centers over enclosed malls suggests how we desire real public spaces, spaces where we can merely convene, and are not expected just to shop, running in and out of stores to satisfy material wants and needs. We want to linger, in public together, with no particular agenda.

To be sure, we suffer a dearth of such spaces. Remnants abound in the American civic landscape—parks, town squares, courthouse lawns—but they are idle, and empty. The public is elsewhere. It’s at the mall. During the Occupy Wall Street movement, protest groups in many cities had trouble finding public spaces that still mattered, where they could transmit their message. Some were reduced to occupying median strips in suburban highways—across from busy shopping malls. Even the status of the very epicenter of the Occupy movement was itself ambiguous. Though seemingly public in all obvious ways, Zuccotti Park is in fact the property of private interests, who tolerated the protestors—but not for long.

This suggests another important feature of the properly public realm: as Arendt put it, it must be agonal; it must be a space where competition and conflict occur between different parties and interests—and where real individuals are crafted in the process. Humans have an inherent drive to become unique individuals, and display themselves and endure as such. This is central to the kind of immortality we desire; we don’t simply want to endure as one among many. And yet, Arendt argued, one cannot become such an individual in the seclusion of his basement, but only in the company –amid the striving and tussling—of others.

Such talk might bring to mind Black Friday, when customers stampede to grab flat screen TVs, discount laptops or the toy of the season. Or one might say that teens cruising the mall on weekend nights are also demonstrably agonal, looking to outdo one another in feats of style, or attracting the opposite sex. But this is not enough; in the public realm, we expect competition in more serious matters.

A key sign that a place is not so public as it pretends, Arendt explains, is if it is charming. Charm, she says, is merely an extension of the private realm. It is safe, familiar—idealized; charm excludes real differences, real affronts and any dissonance or conflict. Further, Arendt writes, “while the public realm may be great, it cannot be charming precisely because it is unable to harbor the irrelevant.” Real public spaces announce that they are committed to a higher agenda—transcendent principles, noble aspirations, immortal values. The mall can never aspire to this so long as it is devoted to fleeting and often inconsequential matters, or as Arendt puts it, the merely ‘functional.’ Shopping is the ultimate exercise in futility, after all. It never satisfies—you are doomed to come back for more.

How much of this country is blighted with awful commercial complexes and suburban sprawl antithetical to our metaphysical needs and higher aspirations? Millennials know better—and many are voting with their feet, eschewing the suburbs of their upbringings, and moving to older neighborhoods and urban settings that are walkable, connected by public transportation, and punctuated by great, living public spaces. We ought to heed their message—and Chuck Thompson’s sorry fate—and commit to erecting noble structures, neighborhoods and cities, which suggest that we are more than just "shoppers," or "workers" or "residents"—but citizens, and individuals who wish to share in the endurance of enduring places.