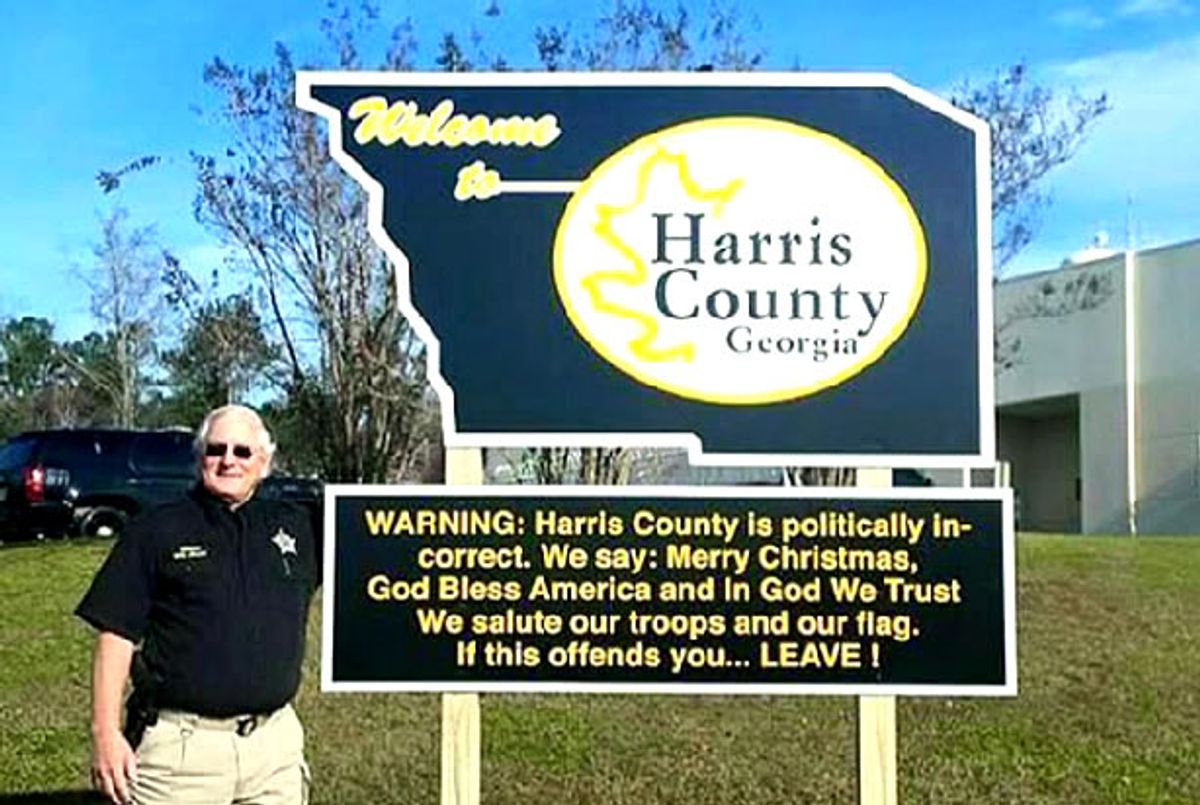 The sign reads "WARNING: Harris County is politically incorrect. We say: Merry Christmas, God Bless America and In God We Trust. We salute our troops and our flag. If this offends you...LEAVE!"

Even though he purchased the sign with $550 from his own pockets, he admitted that where he decided to post it is "probably why I'm catching so much heat over it -- but I'm the custodian of [the department], so that gives me the authorization until I'm no longer in office to keep it there, I guess."

"I guess" isn't the strongest legal defense -- in fact, it suggests the six-term sheriff is begging for someone to launch a legal challenge of it so he can drum up more support among "the silent majority."

"The silent majority has been silent way too long," Jolley said. "Just things that are happening nowadays, I guess I got time to thinking about it, and my staff brought that saying to me, we looked at it and all kind of liked it, and I thought it was something I'd stick outside the office."

Not everyone is as pleased with Jolley as he is with himself, however. The American Humanist Association's Monica Miller sent a letter to the department on Wednesday stating that "for a government official to affirmatively order those who do not support 'Merry Christmas' to leave the community [and] to expressly state that visitors must accept 'God Blss America' and other theistic messaging is unquestionably an unconstitutional act of hostility."

Jolley replied that "I'm not naive enough -- and I hope they're not naive enough -- to think I can order anyone to leave the county. But if it offends someone, they're more than welcome to leave." Of course, the language of the sign does, in fact, order those who disagree with it to "LEAVE!" The implied "you" before "LEAVE!" indicates exactly what those who would take issue with the explicit endorsement of theism generally and Christianity in particular should do.

Jolley finished by noting that if the sign "offends them, truly offends them, maybe they're in the wrong country." That's "country" with an "r," not "county" without one, just for the record.