The great Atlantic comeback of the great white shark

We've come a long way since the days of "Jaws." Great whites are now recognized as vital to the ocean's ecosystem 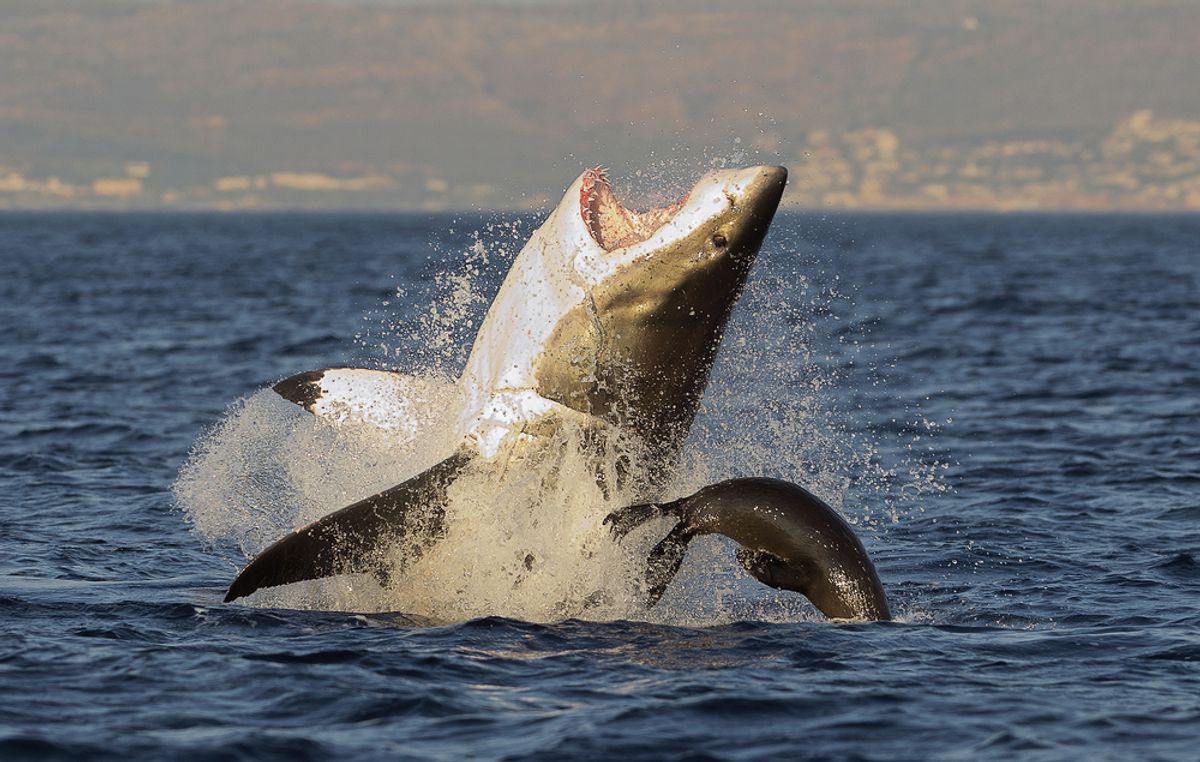 Beachgoers in Cape Cod made headlines this year by taking action that would have been unthinkable just a few decades ago and rushing to the aid of several stranded great white sharks. Their efforts, which saved one of the three sharks that washed ashore this year, indicate not only that the species has made a dramatic comeback in the Northern Atlantic, but also that popular attitudes toward these predators have changed drastically in recent years.  Once seen as mindless killing machines, great white sharks are now increasingly understood as a key facet of the ocean's ecosystem.

In the late 1970s, great white sharks experienced an unprecedented onslaught of negative publicity. With the 1976 release of the film Jaws, the public became terrified of entering the water, lest they encounter a "rogue" great white that would habitually target humans. Both the Jaws novel, released in 1974, and the film were inspired by Victor Coppleson’s 1958 book Shark Attack, which advanced the theory that once a predatory animal like a great white shark tasted human blood, it would be inclined to strike at the same prey again. This theory has since been widely discredited.

The myth of the blood-thirsty great white proved dangerous for the sharks. Already in demand for their fins and jaws, anglers also began to target white sharks as trophies, which further decimated the species in the Northern Atlantic. Though research on great whites is scarce, by the 1980s the Atlantic population had declined to an estimated 27 percent of its 1961 size.

In 1997 the great white shark became a federally protected species in the Atlantic, which meant commercial and recreational harvest were prohibited in the region. This marked a turnaround for the species. According to NOAA, the number of great whites in the Atlantic is now at 69 percent of its 1961 population size, a significant increase from the 1980s. Thanks to one of the world's largest seal colonies, located at Monomoy Island, a global great white hotspot has also developed around Cape Cod.

The growth of the Atlantic population has stimulated shark research in the region, as well as education and outreach efforts to improve public perception of great whites. The Atlantic White Shark Conservancy, established in Cape Cod in 2012, has played a critical role in both of these efforts. This volunteer-based nonprofit group works with the Massachusetts Division of Marine Fisheries to document and tag white sharks in the region, identifying each shark by its distinctive markings and coloration patterns. In 2014, the conservancy identified 68 individual great whites swimming off the cape. As this year's season drew to a close, conservancy researchers had cataloged more than 120 white sharks, 80 of which were new visitors.

The efforts of the conservancy have also extended to public outreach, including marine biology focused summer camps and educational programs for children. For example, the Gills Club for young girls connects students with female marine biologists. The conservancy also offers lectures and public presentations for adults, works with public safety officials to produce advisory signs and educational materials, and manages a joint fundraising and outreach campaign that has placed great white sharks on license plates across the state of Massachusetts. Additionally, the conservancy has been instrumental in the development of regulations enacted this past summer that establish permit requirements for cage diving, baiting, and feeding sharks and are intended to safeguard both local swimmers and shark populations.

Social media outreach has also been central to the conservancy’s efforts. Wayne Davis, a spotter pilot who sights sharks from the air and helps direct the conservancy's research boat towards them, has produced a number of stunning images of the cape’s white sharks, including photos of predation events. Staff have also captured footage from the research vessel, including a video of the first great white shark breach attack filmed off Cape Cod, recorded earlier this year. These photos and videos have provided the fuel for a robust social media outreach campaign that helps reveal great white sharks in their natural habitat to the public at large.

Outreach efforts paid off in a major way earlier this year when beachgoers rushed to the aid of the stranded white sharks. Their reaction highlighted a distinct shift in perception regarding great whites.

“It’s a wonderful testament to how attitudes are changing toward sharks,” Dr. Greg Skomal, a senior fisheries biologist with Massachusetts Marine Fisheries who is also heavily involved in work at the Atlantic White Shark Conservancy, told the Washington Post. “I think they’re morphing away from animals to be feared to animals to be fascinated about.”

OCEARCH, another nonprofit focused on innovative shark research and social media outreach, has also been instrumental in changing public perception regarding great white sharks. Founded by Chris Fischer in 2011, OCEARCH produced the widely popular TV show Shark Wranglers, which aired on the History Channel and reached an audience of over 1.4 million viewers. OCEARCH primarily engages in shark research and global tagging efforts, and has developed a website and phone app that allow users to track their favorite tagged sharks in near-real time.

OCEARCH gives sharks names rather than numbers for the app, allowing users to connect more personally with the apex predators. Some of the sharks tagged by the group have gone on to become marine superstars. Katharine, a great white tagged in Cape Cod in 2013, made international headlines the following year as she traveled along the East Coast of the United States between the Gulf of Mexico and Massachusetts. Katharine's exploits were documented by numerous media outlets, while over 16,000 people followed a Twitter account in her name. Katharine's following now exceeds 35,000 users.

Fischer described her dramatic coastal pattern, which often brought her close to populated beaches, as unique, and a driving factor in her popularity.

“She is so coastal, almost living on the beaches, as well. It makes her somewhat of a media darling as she passes by," he told Space Coast Daily. "At the same time, she is giving us the most comprehensive look at her life.”

This year, Katharine’s celebrity status was surpassed by another star, 16-foot Mary Lee. Early in 2015, Mary Lee began moving up the coast from her winter home near Georgia. A large female white shark weighing some 3,456 pounds, Mary Lee was tagged by OCEARCH in 2012 off Cape Cod. When she began swimming northward toward New York, she became a living ambassador for great whites. By the time Mary Lee turned south once again in early June, she had amassed more than 80,000 followers on Twitter, making her one of the most popular representatives of her species in a generation. The Twitter account is run by an East Coast reporter who has declined to be identified in the media.

Though public perception of sharks has changed on the Atlantic coast, work remains to be done worldwide. In Australia, for example, a string of fatal and near-fatal attacks have led to intensified calls for a shark cull. Additionally, a controversial early-warning policy in Western Australia, used to protect beachgoers, has been utilized in at least one attempt to preemptively kill a white shark, prompting scientists to threaten to withhold shark tracking data.

The great white shark may still be a target in some regions, but rebounding populations in the Atlantic demonstrate the power of regulation, research, and outreach to change the tide of public perception and to facilitate species recovery.