"Sorry we killed your family": We are the terrorists in the Middle East, and our compliant media will never tell the truth

The real Middle East terrorists? Look in the mirror. We'll never face it, because the media won't level with us 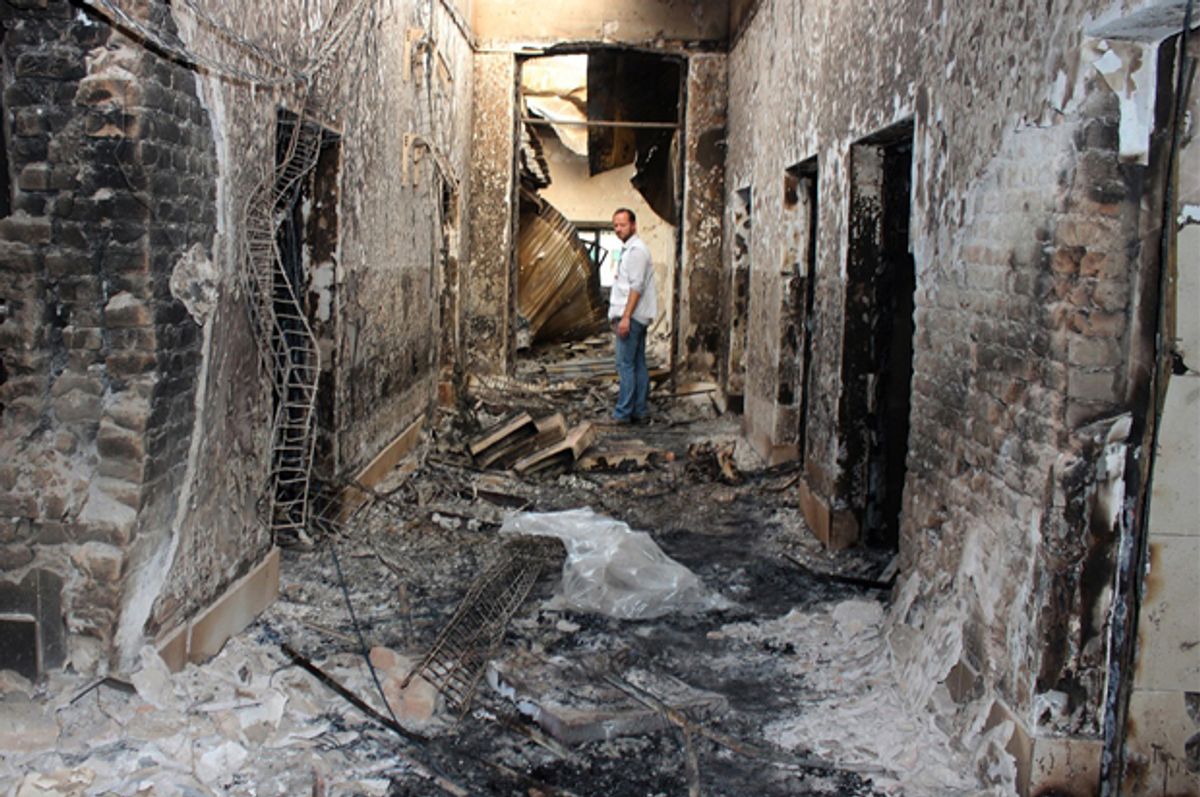 Anybody paying attention to the facts regarding the U.S. bombing of a Medecins Sans Frontieres hospital in Kunduz, Afghanistan on Oct. 3 could come to the conclusion that the attack was not a “mistake” but a targeted strike. To come to this conclusion one would have to abandon the belief that U.S. intentions are always benevolent and tragedies like Kunduz are simply “accidents” that happen in the fog of war. More importantly, such a conclusion would require one to put two words back to back that the mainstream U.S. press would find ludicrous: Western terrorism. It is unlikely that the U.S. media would ever consider such journalistic blasphemy.

But should it? Even a brief examination of the historical record over the past 16 years reveals a number of glaring “mistakes” in America’s bombing and strafing campaigns. Nevertheless, these attacks have been filed away in the dustbin of History after the U.S. government and media made clear that they were “mistakes.” But could they all be mistakes?

Take for example NATO’s bombing of the Chinese Embassy in Belgrade in 1999. Then-President Bill Clinton and CIA Director George Tenet trumpeted the official NATO line that the bombing was accidental. Defense Secretary William Cohen claimed that, “One of our planes attacked the wrong target because the bombing instructions were based on an outdated map.” Skeptical observers, including the Chinese themselves, were more interested in the facts on the ground. This led some to claim that the attack was intentional retaliation for the Chinese trying to acquire stealth fighter technology from the Serbs, who had shot down a stealth fighter jet earlier in the war. The Chinese government stated, “We do not believe the embassy was bombed because of a mistake with an out of date map.”

Another fact in the history of U.S. bombing “mistakes” was reported by the New York Times in October 2001. The Times noted that, “American warplanes bombed and largely destroyed the same Red Cross complex in Kabul that they struck 10 days ago [emphasis added], an error the Pentagon admitted tonight, saying it occurred because military planners had picked the wrong target.” If such a “mistake” were made by another technologically superior military like Russia or China it would certainly have been reported as terror bombing. But the U.S. government and media claimed it was a “mistake,” and thus it was. There was little outcry and no follow-up.

The following year the U.S. military “mistakenly” bombed an Afghan wedding in Urozgan province, killing 30 civilians.  In fact, 2002 was a bad year for U.S. bombing “mistakes” in Urozgan. According to the Guardian, in January of that year 16 Afghan wedding guests were killed in another U.S. bombing in the province. Taliban leader Mullah Muhammad Omar hailed from Urozgan. At the time of the bombings the U.S. was frustrated that it had not fulfilled its stated mission of capturing Omar and his Taliban guest, Osama bin Laden. Yet, one would be considered crazy by the mainstream press if he concluded the Urozgan bombings were revenge bombings, despite the clear precedent set in Dresden, Tokyo and Hanoi.

Shortly after the invasion of Iraq in 2003 the U.S. military “accidentally” killed three journalists in Baghdad at the Palestine Hotel, a hotel, the New York Times reported, “where most international journalists are based.” The U.S. military claimed it was taking RPG fire from the hotel’s vicinity. An eyewitness, Sky Television reporter David Chater, said he did not hear any gunfire coming from the hotel before U.S. tanks fired. In attempts to reassure the American public of military benevolence, Brigadier General Vincent K. Brooks stated, “This coalition does not target journalists.”

In a July 2007 incident exposed by Wikileaks, U.S. military helicopters in Baghdad killed two Reuters journalists and 10 others, after “mistaking” the camera one reporter carried for an RPG. A Pentagon report later asserted that the pilots had no way of telling that the journalists were not insurgents. The Wikileaks video certainly calls this Pentagon assertion into question.

Currently, in an area where many “mistakes” have led to civilian deaths, the U.S. military continues its reckless use of drone warfare to target “terrorists” on flimsy evidence. According to the Bureau of Investigative Journalism, Presidents Bush and Obama have ordered the assassinations of between 2,449 and 3,949 individuals, including 423 to 962 civilians and six Americans without due process of the law. Sadly, 172 to 207 children are included in this number. But the American public rarely hears of these “mistakes” unless people of note are killed -- like Westerners caught in the crossfire.

It would be foolish to believe that mistakes do not happen in the heat of battle. But historical facts as well as the facts being exposed about the recent Kunduz bombing point menacingly toward calculated intent rather than innocent mistakes.

Perhaps the U.S. media should consider the questions that Chinese Ambassador Li Zhaoxing posed in 1999 when the News Hour’s Jim Lehrer asked him why he thought the U.S. would intentionally kill Chinese citizens in Belgrade. The Ambassador answered, “Ask your own people. Ask your own officials. Ask your own experts. If they ask themselves, seriously, honestly, do they really believe that this is simply a kind of mistake?”