We mourn destruction of artifacts, but the living churches being destroyed are the heart and soul of Christianity 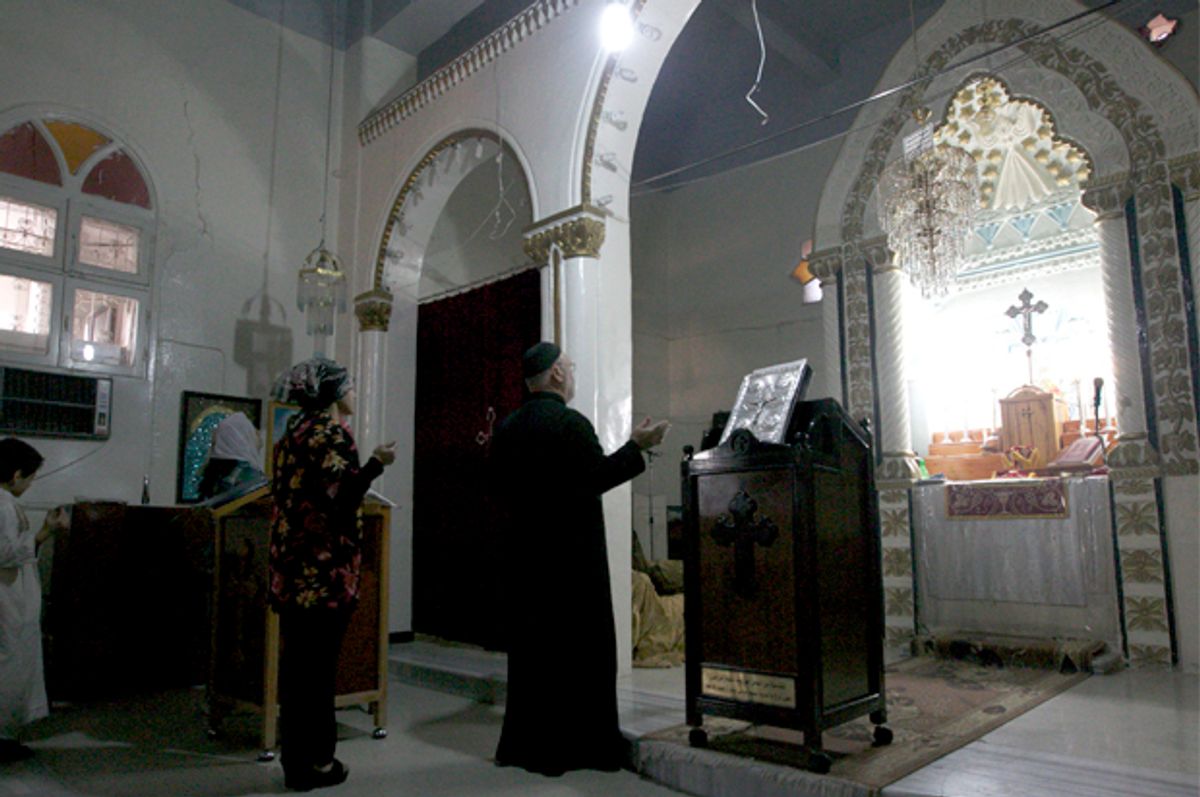 Every few days, ISIS militants in the Middle East carry out some new atrocity calculated to inflict shock and awe on Western opinion. They carry out barbarous executions, they destroy priceless items of cultural heritage, all duly filmed, and those acts have their effect worldwide. It's a sad commentary on global opinion, though, that some of the most savage blows inflicted on the world's cultural and religious heritage have gained nothing like as much attention. Assyrian sculptures and Greco-Roman temples are irreplaceable monuments of human civilization, but so too are the living churches now being uprooted. Christian communities have almost been obliterated in most of Iraq, and a similar process is underway in large areas of Syria. That humanitarian crisis is familiar enough, but far less understood is the significance of these churches now facing terminal crisis. In their time, they represented not just a distant fringe of Christianity, but its heart and core. Ironically, they decisively shaped the history of Islam, as well as Christianity.

ISIS supporters identify Christian homes with the Arabic letter Nun for Nasrani, Nazarene. That usage takes us back to an era when followers of Jesus were as likely to bear that name as the newer alternative, "Christian." For centuries, Christians in those regions used the Semitic Syriac language, which is so near to Hebrew and Aramaic. For a millennium, Syriac was one of the great languages of Christian literature, scholarship and devotion, at least equal in significance to Greek and Latin. What we see being before our eyes are the last vestiges of that critical third component of early and medieval Christianity.

The Syriac churches emerged on the borderlands of the two great empires, of Rome and Persia, and from earliest times, Christians engaged in intellectual debates among multiple competing cultures and faiths. Besides their pagan neighbors, Christians were deeply involved with Jewish communities, to whom they remained close culturally as well as linguistically. Church and synagogue were never as far removed in the east as they would always be in European Christendom. Syriac monks even bore the title Rabban. As late as the 13th century, Syriac Christian scholarship enjoyed a final flowering with the amazing polymath Gregory Bar-Hebraeus, the half-Jewish "Son of a Hebrew."

Early eastern churches produced some of the greatest intellects in the Christian tradition, the mighty "Syriac Fathers" who were once quite as celebrated as Westerners like Augustine. The greatest Syriac thinker was the fourth century saint Ephraem, a philosopher and theologian who was quite familiar with Rabbinic scholarship. For all his other achievements, Ephraem remained most popular for his prolific hymns, church music and teaching songs, some of which are still used today. Syria was where the Christian church learned to chant, and to sing.

The lands that we today call Syria, Iraq and eastern Turkey were home to hundreds of monasteries that were centers of scholarship superior to anything in the early Christian West, including Ireland. Disastrously, many of those sites have been repeatedly in the headlines in the past few years, as the settings for hideous massacres and ethnic cleansing directed against the remnant Christian populations. Al-Raqqa, the main Syrian headquarters for ISIS, was once Kallinikos, a thriving center of Syriac monasticism and learning. Even a decade ago, the city was 10 percent Christian, but that minority has now presumably vanished. Also on the front lines of the Syrian war is Deir ez-Zor, which preserves the name of the monastery, the Deir, around which the city was built. Until the last decade, some of the world's oldest and most renowned religious houses were found within a few miles of the Iraqi city of Mosul, in areas now thoroughly purged by ISIS.

But for many centuries, the Syriac Christian world ranged far beyond this Middle Eastern heartland, and those churches were in their day by far the world's most successful missionary bodies. If not truly global, their churches were proudly transcontinental. Pushing far to the east along the Silk Route, Syriac Christians reached China no later than the fifth century and Tibet by the eighth, while the flourishing churches of southern India remembered their allegiance to a patriarch based in Babylon.

Wherever they went, eastern Christians took with them their writings and their scriptures, and exchanged ideas with other faiths they encountered, including Buddhists and Manicheans. Through the Middle Ages, Syriac churches scattered across Central and Eastern Asia used as their symbol a lotus cross, which merged the symbols of Christianity and Buddhism. Those churches served as conduits for the importation to the West of Indian and other Asian ideas, including the numbering system that we today call Arabic.

Those Christian encounters with Asian faiths were sporadic, but from earliest times, the Eastern churches were intimately involved with Islam. Christian monasteries abounded in those areas where Islam arose, and when the Quran depicts familiar biblical stories or individuals, it is always in a form mediated through later Christian writings and alternative gospels that were read in Syriac. The lengthy Quranic accounts of Jesus and the Virgin Mary draw heavily on apocryphal scriptures that met the demand of ordinary believers for every romantic detail of the early lives of the Savior and his family.

Beyond shaping the scriptures of Islam, Christians supplied most of the basic religious practices of early Muslims. The stern Christian Lent became the Muslim Ramadan, and the monastic habit of prostration during worship established the pattern that all Muslims observe today. In its layout, a typical modern mosque is a good facsimile of the typical churches that early Muslims would have found in Syria and Palestine.

Within Christianity too, those Syriac clergy left an unexpected impact. In the seventh and eighth centuries, an early wave of Syrian refugees established themselves in Italy, where their families produced several successive popes. Those church leaders brought with them practices that at the time seemed quirky and "oriental," but which today Westerners know as absolutely mainstream and foundationally Catholic. Those include new forms of devotion to the Virgin Mary, as well as many now standard liturgical practices, and of course, those characteristically Syrian forms of chant and song. Much of what we think of as fundamentally Western and Catholic has its true roots east of Damascus.

If we ignore the history of those Eastern Syriac churches, we are left with a severely impoverished picture of the world's cultural history, to say nothing of its religious spectrum. The tragedy is that only now is this story beginning to find its way into standard historical accounts, at the very moment when the living Christian communities involved are ceasing to exist.