GOP's hell-bent on tearing us apart: A decades-long strategy to win by divisiveness now leads to President Donald Trump

GOP's Southern strategy has won elections for 50 years. It's also fragmented America and destroyed our politics 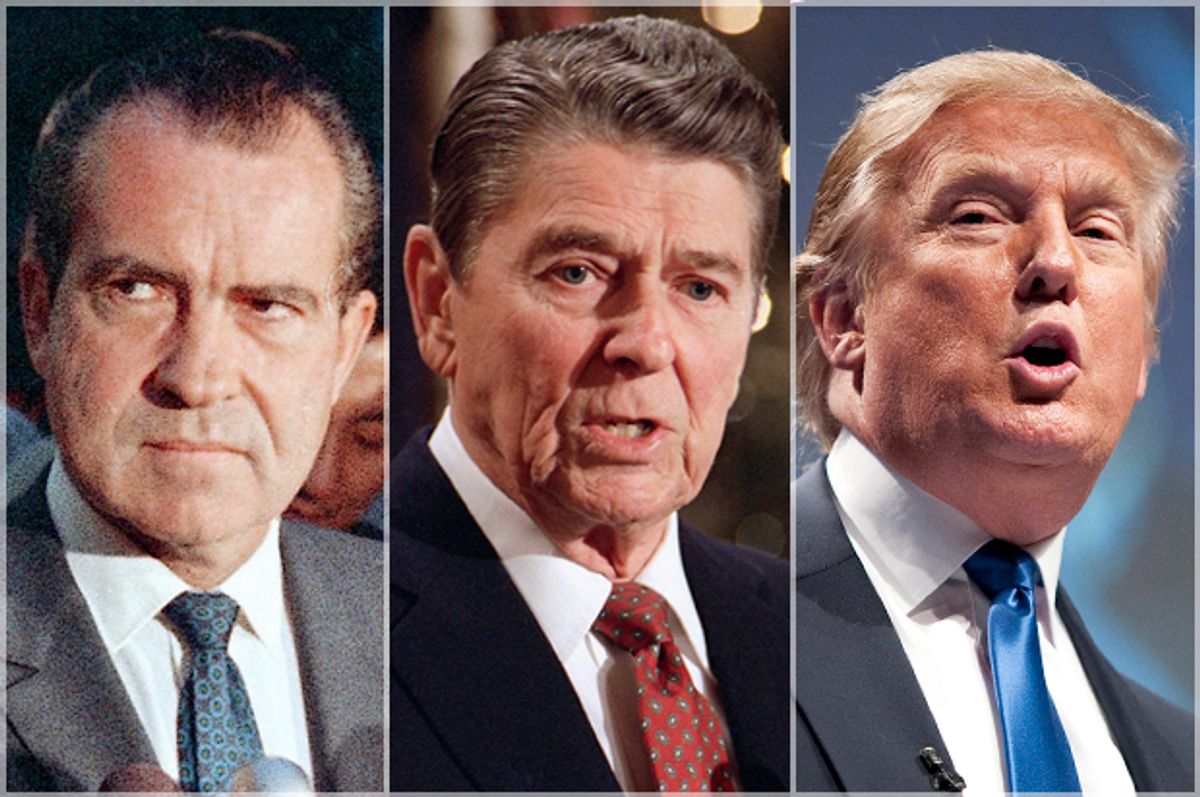 Republican candidates for the presidential nomination claim that Democrats kill babies and harvest their organs to sell them, insist the U.S. is at war with an “evil state of consciousness,” compare Muslims to rabid dogs, and call for closing mosques and registering Muslims. These are not fringe candidates. They are the front-runners.

American politics has descended from principle into tribalism.

The descent began in 1968. That year’s presidential election looked to be a principled fight, with Democrats Hubert Humphrey and Robert F. Kennedy articulating a vision of an inclusive America in which the government expanded efforts to guarantee equality. For their part, Republican managers understood that they had a problem. The two sides of the Republican Party were too far apart to be cinched together by any national vision.

On the one hand, moderate Eisenhower voters believed in using the federal government to promote equality of opportunity, although they were nervous the Johnson administration’s War on Poverty had gone too far. On the other hand, Movement Conservatives who had backed Barry Goldwater in 1964 rejected the principles of the New Deal. They wanted the government to stop meddling with the social welfare legislation that they insisted was a redistribution of tax dollars from hardworking white people to lazy African-Americans.

The racial dimension of this decision is well known. Less well known is that it also marked a seismic shift in the mechanics of American politics. The chaos of 1968 cemented the Republicans’ new electoral strategy. Dr. Martin Luther King Jr. and Robert Kennedy were assassinated. Democratic presidential nominee Hubert Humphrey got sent into obscurity, and former Vice President Richard M. Nixon won the White House without a popular majority.

The year after the election, an architect of the Southern Strategy named Kevin Phillips wrote a groundbreaking book. In "The Emerging Republican Majority," he argued that voters aligned according to their ethnic, religious and cultural backgrounds. By playing to those different constituencies, he argued, the Republican Party could cobble together a coalition that would dominate American politics for at least a generation. Republican leaders began to slice and dice the American electorate rather than advancing a coherent vision of the nation’s future.

Movement Conservatives’ first boogeymen were African-Americans. Since Reconstruction, reactionaries had insisted that government protection of black rights meant a redistribution of wealth. The federal muscle required to enforce the 1954 Brown v. Board of Education decision enabled Movement Conservatives to rehash this old argument. Linking black rights to taxation enlisted racism on the side of Movement Conservatism, a linkage illustrated when Barry Goldwater picked up the Deep South states of Louisiana, Mississippi, Alabama, Georgia and South Carolina in 1964.

In 1968, the Southern Strategy brought the Movement Conservative narrative into the heart of the Republican Party. Nixon’s strategists deliberately pushed the idea of good Americans under siege by constructing a simple narrative designed to play on people’s emotions. “Voters are basically lazy,” one of Nixon’s advisors wrote. “Reason requires a high degree of discipline, of concentration; impression is easier. Reason pushes the viewer back, it assaults him, it demands that he agree or disagree; impression can envelop him, invite him in, without making an intellectual demand…. When we argue with him, we… seek to engage his intellect… The emotions are more easily roused, closer to the surface, more malleable.” Nixon cemented a constituency by dividing the world into the “Silent Majority,” and “they.” The Silent Majority was made up of hardworking men and women. “They” were minorities, women, and anti-war agitators who wanted government handouts even as they attacked the nation.

Ronald Reagan was more explicit about who the bad guys were in his division of the world into good and evil. In 1983, in a speech to the national Association of Evangelicals in Orlando, Florida, he told the audience that good Americans were in a titanic struggle with an “evil empire.” The struggle was between “right and wrong and good and evil” with God and individualism standing against secularism and communism. He explicitly identified those Americans who were on the side of the enemy. They were those godless people who promoted communism by redistributing the tax dollars of hardworking white individuals to feed the gaping maws of lazy minorities and women. He tied these themes together with his iconic invocation of the “Welfare Queen,” a black woman who lived like royalty by cheating the welfare system. And he used the power of this image to deregulate the economy and slash taxes.

By 1988, when George H. W. Bush was running for president, the personification of the enemy was clear. But strategist Lee Atwater extended that image to include the element of direct violence. The Willie Horton ads gave the faltering Bush campaign a winning injection of adrenaline by presenting voters with a large black criminal set free by the “liberal” Democratic nominee to rape white women and murder white men. Now the enemy was not just an ideological threat; its members were a very real physical threat. Ironically, Bush himself fell to the Movement Conservative division of the world in 1992, when Movement Conservatives read him out of the good side and into the evil after he raised taxes. His redefinition as a “RINO” killed his reelection campaign.

George W. Bush gave the Movement Conservative definition of an enemy a new international dimension. Voters backed the younger Bush on the promise that he would be a “uniter, not a divider” and would quiet the extremism of the Gingrich years. But his own Movement Conservative extremism quickly became clear as he gave federal funding to religious charities and welcomed even more business deregulation and further tax cuts. By summer 2001, people were souring on what had begun as a precarious presidency. The events of Sept. 11 enabled the president to redefine his actions. “In our grief and anger we have found our mission and our moment,” Bush announced. Americans rallied behind the president after the attacks, and he used his sudden popularity as a mandate to change America and the world along ideological lines. Members of his administration, one complained, “consistently acted as if the height of political sophistication consisted in reducing every issue to its simplest, black-and-white terms for public consumption, then steering legislative initiatives of policy proposals as far right as possible.” Bush announced: “Either you are with us, or you are with the terrorists.” He used that stark split to push the Movement Conservative program both at home and abroad: He continued to deregulate the economy and launched the Iraq War.

The election of Democratic President Barack Obama in 2008 sent Movement Conservatives into full-blown ideological war. A biracial man who believed that the government should play a role in the economy and in social welfare had taken over the government. They howled that he was a socialist and a communist; that he was a Muslim; that he wasn’t even an American. They dehumanized him, circulating images and jokes that represented the president as a monkey. The realities of the economy, society, foreign affairs, legislation—all fell by the wayside. In a world where a black-and-white narrative has replaced a national vision based on principles, one tribe is good and one is evil.

Today’s Republican contenders for the presidential nomination are taking this Manichean narrative to the next level. Their worldview is utterly divorced from reality, but it offers a clear vision: Embattled Christian Americans stand against a horde that is attacking God and free enterprise. There is no room here for nuance or facts. Democrats kill babies and support terrorists as they strive to destroy America. Movement Conservatives are on the side of the angels, determined to defend America. They must no longer accept the legitimacy of their subhuman enemies; they must work to purge them from the nation.

Yet, within this very extremism is the seed for its own destruction. The popular realization that the leading Republican candidate for president is calling for a Muslim policy that looks much like the one practiced by the Nazis against the Jews has, at last, forced opponents to stop worrying about winning voting blocs and instead to articulate true national principles. Americans are not just constituencies to be sliced and diced to guarantee the triumph of Movement Conservatism. We stand for something.

It is high time we remember that.