Spare us the religious babble: In Paris and the GOP, the faith-deranged are who we need to be saved from

Glib talk about God from preachers and politicians is not needed. Better to separate church and state for real 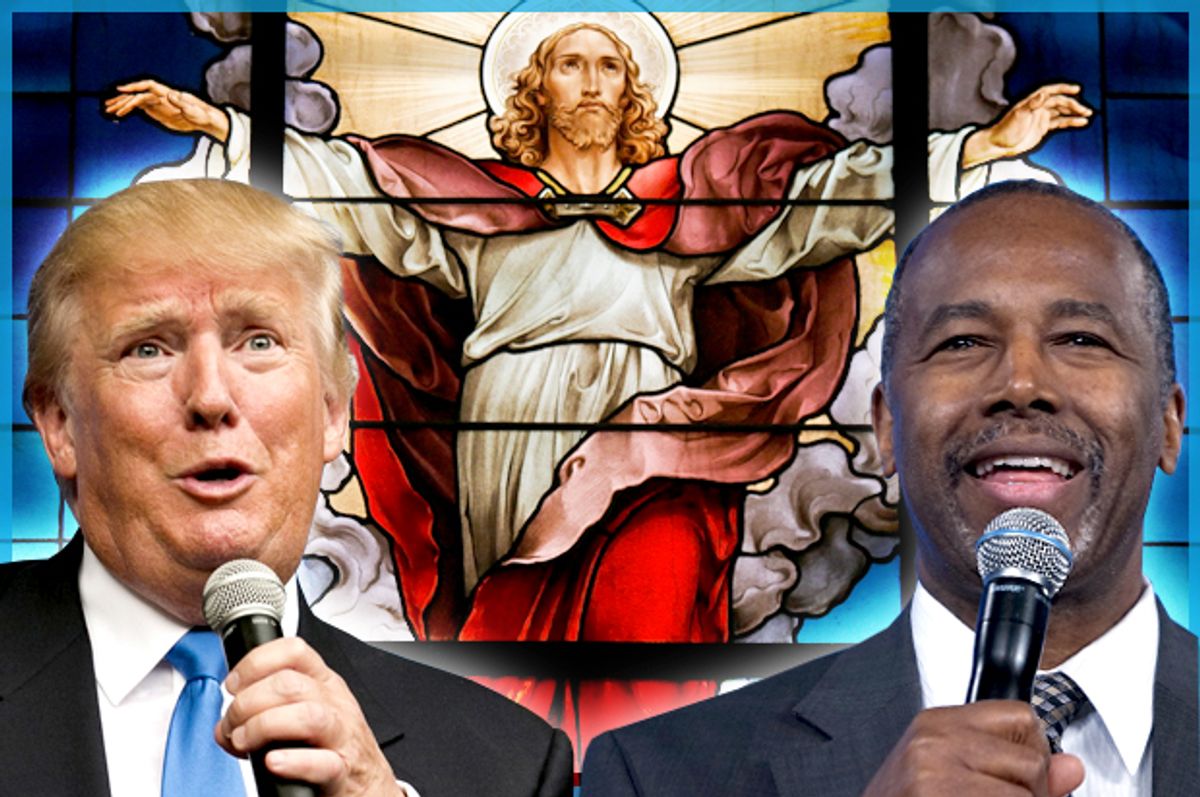 Ask a Russian arms dealer if the world would be better off without Kalashnikovs, and what do you think he would say?  Ask a heroin addict if the war on drugs should be intensified, and how do you believe he would respond?  And query Republican 2016 contender and die-hard Seventh-Day Adventist Ben Carson if the doctrine about Jesus' imminent return to Earth originated by his sect's crackpot founder in the 1840s should be revered any less after having been proved entirely bogus, and what would he answer?

No, no and no, of course.  Self-interest, addiction and delusions are perennially powerful factors in motivating human behavior, with victims of religion managing to both sustain the most damage from all three banes and repeatedly inflict grief on the rest of us. In truth, such pathetic souls merit swift and hermetic quarantining, for their sake as well as ours. Yet because their self-interest (really, greed for tax-exempt donations or a reluctance to admit they've been wrong about the most essential questions imaginable), addiction (to childish, falsely comforting fables) and delusions (that God has bestowed upon them a status higher than that of other humans, which gives them the right to dictate how the rest of us should behave) fall into the grossly ennobling category of "religion," we find ourselves compelled to tolerate their presence.  We remain, now as ever, subject to their daft, yet to-be-respected-at-all-costs, thoughts on sundry manner of subjects, thoughts drawn from a dung hill of rotten ideas, even if their propagators dwell atop the ivory towers of academia.

The Islamist attacks in Paris on Nov. 13, and the charged atmosphere of menace and fear that, so far, shows no sign of abating in the French capital (where I am now), have afforded us incontrovertible evidence in favor of abandoning the darkness that is religion, and should have, at the very least, allowed us a much-needed respite from religious palavering. After all, after having suffered through such a horrific, God-inspired tragedy, the last people we should have to hear from are those afflicted with the malady of faith.  Yet, in fact, precisely because they are "people of faith," they continue to enjoy widespread respectability, even among the editors of our land's most renowned newspapers.

Thus it happens that this week I find myself obliged to address an essay, "In Light of the Paris Attacks, Is It Time to Eradicate Religion?" published in the Washington Post by Miroslav Volf, who teaches theology at Yale and runs that institution's Center for Faith and Culture. Volf's bio, which informs us that he has a book coming out titled "Flourishing: Why We Need Religion in a Globalized World," gives us a hint about the answer he will offer to the headline's question.  No rationalism to be forthcoming from him.  In any case, we certainly don't expect theologians to denounce the (scandalously) "sacred cow" that nurtures them.  But now is no time to shy away from attacking ideas that have led to the murder of innocents once again -- and will surely kill multitudes more.

Volf shows he's aware of how tough his case will be to make after the Paris attacks, feigning sober evenhandedness by opening with words about religion's "long trail of blood and tears" and the "terror" spread by "God's crazy-eyed followers," which is "threatening lives, peace and prosperity of everyone on the planet."  All this should lead us, he suggests, to conclude that "The sooner humanity either eradicates or quarantines off religion, the better our world will be."  But, not surprisingly, as he has it, "This conclusion would be too hasty."

Volf notes the spectacular rise of the religiously unaffiliated (from 0.71 billion in 1970, with 1.2 billion expected in 2050), but contrasts it with even faster growth in the numbers of the faithful (mostly Hindus and Muslims, but also Christians, surely in Latin America and the Philippines) who are turning "increasingly politically assertive."  (In this regard, one thinks immediately of Islamists, of course, but also of India's recently elected prime minister, Narendra Modi of the Hindu nationalist Bharatiya Janata Party, as well as of the frustrating dominance of evangelicals among Republican 2016 contenders.)  Which all means that eradicating religion "would result in far more bloodshed than religious people have perpetrated throughout their long histories."

Let's stop right here.  Just who advocates "eradicating religion" by any means that could lead to bloodshed?  No one.  Volf is hereby trying to pass off a straw-man fallacy (that unnamed actors would be inclined to use force against believers) and, in doing so, hopes to leave us with no choice but to accept his conclusion: Religion Must Live.

But even before we get to such a conclusion, Volf subjects us to opinions regarding faith as purportedly understood by skeptics: that religion is "inherently violent" because of its binary dogma, pitting believers in the Truth Faith against sectarian rivals enamored of "imperfect, misguided, or even wicked" ways; that the "positive revelation" vouchsafed to "Moses, Jesus, or Muhammad" does not suffice, with "reason stop[ping] at some point . . . and giv[ing] way to mere conviction, so all world religions are marked by irrational certainty"; and that, according to a work published almost a decade ago by a sociologist who happens to be a Methodist preacher turned Anglican, religion goads its votaries to violence predominantly when it intersects with politics.  In the hands of "a revolutionary or a statesman . . . even the most peaceful religion will become ready to 'take up the gun.'"

This is untrue: Religions are not all the same, with some being more peaceful than others.  As Sam Harris has pointed out, the doctrines of Jainism and Buddhism cannot be readily pressed into the service of violence in the way, say, Islam's calls for jihad can be.  And believing that the Good Lord telegraphed intelligence concerning the nature of the cosmos and mankind's role in it to a select few -- revelation, in other words -- involves accepting the veracity of non-verifiable, unsubstantiated propositions laid out in ancient texts and thus epitomizes the antithesis of reason.  "Mere" -- that is, ungrounded -- "conviction" that such bizarro propositions are true is the only sort of conviction possible, with rational thought simply a no-show in any mise-en-scène devised by the faithful.

Volf's essay has been shoddy enough up to here, but he then swerves off into untruths so egregious one simply has to conclude that shutting down Yale's Department of Religious Studies and its Center for Faith and Culture would amount to a vital public service, which may well obviate future intellectual assault and battery.  Readers will have noticed that Volf has spoken only of "religion" generically, and does not, puzzlingly, name the faith that motivated the Paris massacre occasioning his piece.  He continues in this generalizing mode, and subjects us to the first of two sterling inanities: "all world religions have resources not just to avoid underwriting violence, but to promote cultures of peace in pluralistic environments."

Well, if those espousing the inherently divisive dogmas forming the basis of the Abrahamic creed in question are doing anything with their "resources" to soothe the murderous rage to which they provoke their followers, it is not enough.  Pluralism, in any case, has nothing to do with the totalitarian essence of Abrahamic religion, which takes as a given one wrathful, vengeful God.  Islam, for instance, while formally adjuring tolerance (and second-class, discriminatorily taxed dhimmi status) for "Peoples of the Book," looks forward to total worldwide triumph, with the flames of hell burning for those who reject it.  Let's not forget that Islam means submission -- to the will of God.  Nothing "pluralistic" there.

Volf asserts, in sterling inanity No. 2, that if (again, unspecified) "world religions" have fostered violence, it's because they got mixed up with politics.  Well, sorry, those suffering from the delusional notion that they are the purveyors of the Good Lord's Tidings rarely keep it to themselves, but often turn to politics to force their will on the rest of us, as the largely successful Republican stealth campaign to curtail women's reproductive rights and the multitudinous Religious Freedom Restoration Acts attest, along with the near-seditious statements of faith-mongers Mike Huckabee and Rick Santorum and the theocratic, anti-gay-marriage strivings of Alabama chief justice Roy Moore.  In short, religion and politics, even in Christianity, very much go together.  This is rather more the rule than the exception.

Volf then tops the sterling inanities just examined with a gold-plated doozy: religions' fundamental values include the "equal moral value of all citizens ...  They do not distinguish between moral 'insiders' and moral 'outsiders'" and offer, of all things, an "equal voice for all citizens." This statement is so blatantly counterfactual that it requires, really, no refutation: The rather different destinations in the Hereafter to which religion dispatches "moral insiders" and "moral outsiders" suffice to signal more than a degree of "inequality," with the only "voice" allowed unbelievers being their screams of torment as they undergo impalement on Satan's pitchfork.  In any case and moreover, Judaic tradition includes the prayer by which men thank God for not being born a woman (or a Gentile).  1 Corinthinans 14:34 mandates women not use their voice, but, rather, keep silent in church.  Ephesians 5:22 ordains women submit to their husbands "as unto the Lord."  I won't go on; none of this should be news.  Religion and equality, in short, are like oil and water: They don't mix.

"World religions can and many do," Volf tells us, "embrace full freedom of religion, which includes freedom to adopt and change religion as well as freedom to propagate religion."

Now here I refuse to take the bait.  This glistening platinum inanity surely reflects sufficient light to be visible from the deeper reaches of outer space.  A one-word refutation will do: Islam.

Volf finally embarks on his peroration with (again, wholly unsubstantiated) blather about our being recipients of a "transcendent call."  I will just adduce the wisdom of the late Christopher Hitchens here: "What can be asserted without evidence can also be dismissed without evidence" -- an overarching statement applicable to Volf's essay, and to religion as a whole.

Now at this point I will turn my wearied gaze away from Volf's work and respectfully ask the Washington Post's opinion-page editor a couple of questions.  Could you not have published essays from the rapidly growing nonbelieving segment of the population?  Atrocities committed in Islam's name prompted this ghastly essay.  Would it not have been a good idea to seek out, for instance, former Muslims (or "apostates deserving of death" as Islam would have it) and see what they had to say?  Ali Rizvi, Sarah Haider, Taslima Nasrin and Maryam Namazie come to mind, as does the wonderfully talented, outspoken Charlie Hebdo cartoonist Zineb El Rhazoui.  These inimitably brave, enlightened folk take considerable risks in speaking out about Islam, and know only too well the provenance of the violence we just saw on the streets of Paris.  Their thoughts would have illuminated the matter far more effectively than the blundering screed I've just dissected, a screed that makes one thing clear: academic credentials (or at least those in the sham-discipline of theology) do not confer or necessarily conflate with analytical capabilities or even straight thinking.

But, on second thought, let theologians publish all they want: In doing so, they discredit only themselves and their supernatural worldview, and hasten the arrival of the day when no one, or at least no editors of major American newspapers, will take them seriously.

Rationalists, it turns out, have at least that to look forward to.