Why we loved the men and women of "Mad Men": "They’re the only characters in television history who are 100 percent consistent in their behavior" 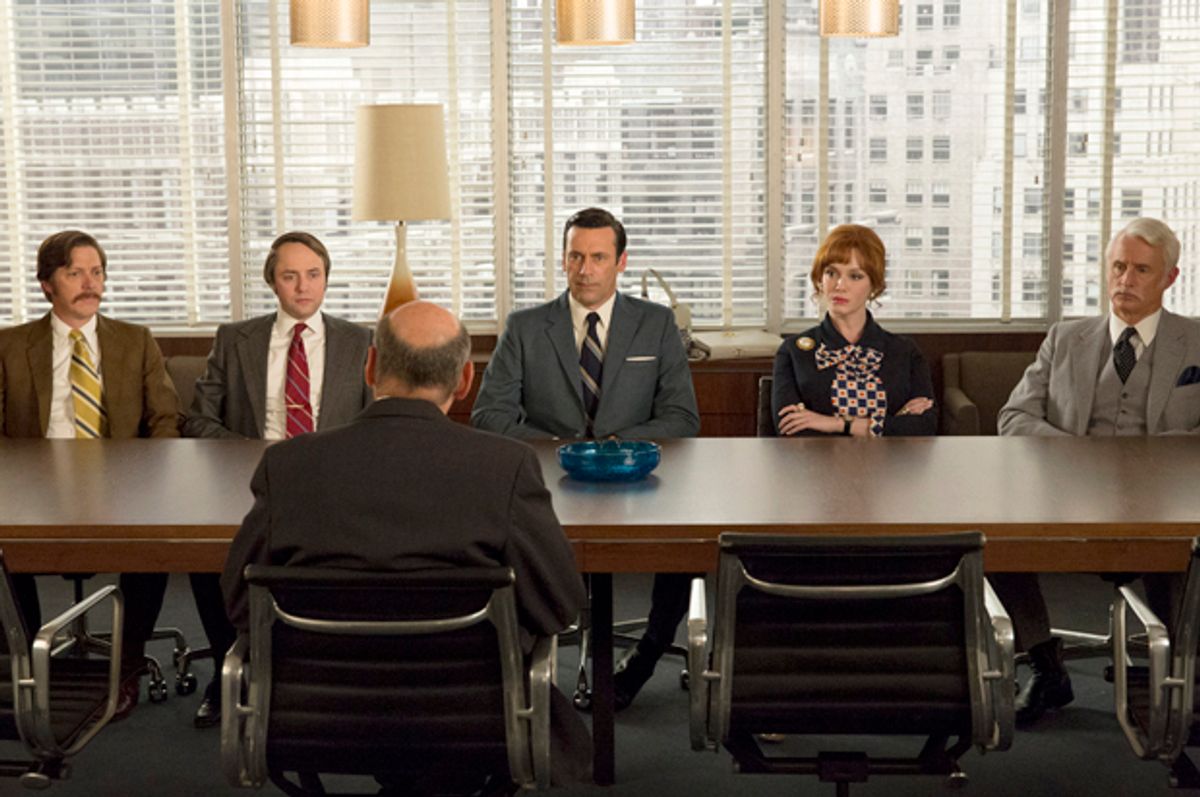 Has there ever been a show that’s been praised, debunked, denounced and debated more than “Mad Men”? It may’ve even left “The Sopranos” in the dust, and it’s never had the kind of near-unanimous praise that greeted a show like “Breaking Bad.”

A cult show that at times became a larger cultural phenomenon, the period drama about Madison Avenue’s advertising agency influenced men’s clothing styles, sparked discussions about sexism in the workplace, and showed the ability of television to capture history. It provoked essays claiming its powers of social criticism and others knocking it as a fashion show.

A new book, “Mad Men Carousel: The Complete Critical Companion,” looks at the show mostly in episode-size chapters -- recaps written on deadline for publications including New York magazine and the New Republic. Both playful – the book includes many small, whimsical illustrations – and Talmudic (most pages include footnotes), “Mad Men Carousel” considers the show deeply and substantially.

Author Matt Zoller Seitz is a well-regarded journalist, TV critic for New York magazine and author of two books on filmmaker Wes Anderson. Seitz was turned on to “Mad Men” by his friend Andrew Johnston, the film and TV critic who died from cancer in 2008. (The book includes eight poems by Martha Orton, Johnston’s mother.)

We spoke to Seitz from his home in New York; the interview has been edited slightly for clarity.

What was it about “Mad Men” that drew you so close, that made you want to concentrate so heavily on it?

It was a lot of things – the characters first and foremost. I was struck as I worked on this book by how psychologically consistent they were. I would go so far as to say that they’re the only characters in television history who are 100 percent consistent in their behavior, and never do anything that’s out of character just for effect. Even if it seems, at first, to be out of character, if you look back to judge their motivations, you see it’s the sort of thing that the character would do.

Another reason: I’m also a filmmaker, and make these video essays that analyze film style, genre and directors… I’m also thinking visually as I’m watching television and movies in addition to thinking about the literary values. And “Mad Men” was a show that had it in both areas: It was very much a literary object – characters, theme, plot, as a book would – but it also satisfied at the level of cinema. The shots meant something, the camera movements meant something.

Like that scene of Don Draper, at the end of Season 5, walking away from Megan, who is shooting that commercial dressed as a fairy princess. And the camera walks in front of him, the doorway recedes in the background and swallows up Don in blackness. You realize they are communicating the distance between Don and his new wife, and also the loneliness he feels at that moment and always probably will because he’s Don. It’s like the scene where a woman asks him at a bar, “Are you alone?” And he looks at her and doesn’t answer.

There’s been a debate around “Mad Men” from the beginning: Is it a handsome, well-designed exercise in nostalgia, or is it a show of dramatic depth that’s also a critique of society? How do you come down? Did the show deepen over time?

I think it was always a deep show – not just in relation to television, but in relation to anything. The first season is a bit more meticulously designed… I do slightly prefer the later seasons for their fragmentary nature.

One thing my friend Andrew said that I’ve quoted many times is that scripted dramas on TV tend to fall into one of two categories: They are novelistic, or they are like short stories. “Mad Men,” like “The Sopranos” before it, lived in both of those modes simultaneously, and did it at the level of the season. That’s what made it so fascinating,

I don’t think they had a bad season. And if you watch the entire thing again, and consider it in totality, you see what a complete vision it is. If you’ve read any of the literature that influenced the writers of the show – John Cheever, John Dos Passos is a huge influence, also John Updike… Dos Passos tells stories of characters of various socioeconomic background, and they’re followed like characters on a television show. And these novels are edited like a movie. And suddenly you’ll get the equivalent of a montage, where he’s interspersing newspaper stories, newsreel narration and popular song lyrics in an almost kaleidoscopic fashion. And then he’ll return you to a narrative of another character that’s already in process.

“Mad Men” is sometimes criticized for “condescending to the past.” You’ve said it yourself. Is that charge fair? How does the show view its time period?

I think it’s fair sometimes, but not fair most of the time.

For the most part, I don’t think it’s an accurate charge. A lot of the times critics who think of themselves as sophisticated and liberal talk about a show condescending to the past, when what the show is really doing is showing how people acted in the past.

It embarrasses us; I’ve thought a lot about why it does. When the Drapers leave that picnic, and there’s the shot of the garbage they left behind… I grew up in the past. I was a kid in the ‘70s, not long after the period depicted in the show. I threw garbage on the ground all the time – everybody did. It wasn’t until those anti-pollution ads with the crying Native American by the side of the road that there was a mass movement against littering.

I kind of developed increasingly less patience toward the charge of condescension to the past: I think a lot of it comes from the fantasy that we are all very evolved and sophisticated compared to our parents and grandparents.

I saw this in the late ‘80s when movies about the past like “Glory” and “Born on the Fourth of July” came out – and not the ancient past either. It was the frickin’ ‘80s. And we look back on the ‘80s now as being politically and culturally primitive compared to now. And if there’s a “Mad Men”-like show someday about [our] period, What are they gonna say? “Wow – they really reached their pinnacle of sophistication in 2015?” I seriously doubt it.

So that’s a long way of saying, “That’s bullshit.”

The book is essentially a collection of recaps. What’s the recap capable of? What’s important to include in one? What do you try to do in yours?

So I try to take the long view and make the piece do as many things as possible. But that’s not the only way to do it. And as I say in the introduction: “Mad Men” is such a rich show, it’s possible to attack it from all sorts of different angles… I could see somebody doing a book of the kind of literary or poetic reveries that Molly Lambert did at Grantland. Or meticulously taking apart the plot details or characters in the manner of Alan Sepinwall. Or I could see this writer Angelica Jade Bastien look at it in terms of genre and the construction of masculine identity.

Writing these can be a work of art in themselves. And they should be a performance – you should have fun when you’re reading them. You should have a sense that the writer is entertaining you and leading you and maybe pulling you in unexpected directions. And it’s almost like you’re trying to humbly create a little work of art in response to the larger work of art that you just absorbed.

I think of it as, That’s this beautiful bowl of fruit, and I’m sitting there with my easel trying to paint it. My painting won’t look like anyone else’s: There are a lot of people who may paint it more realistically or abstractly…

I would love to see more books about “Mad Men” where the lens is somebody else’s. And I’d like to see more criticism that is not just recapitulating the plot with some snarky jokes, which I think is the mode that dominated for years and years, and that thankfully we’re starting to get away from.