Cate Blanchett's cocky elegance: As Queen Elizabeth, Bob Dylan or a closeted '50s housewife, her on-screen seductions are anything but sweet 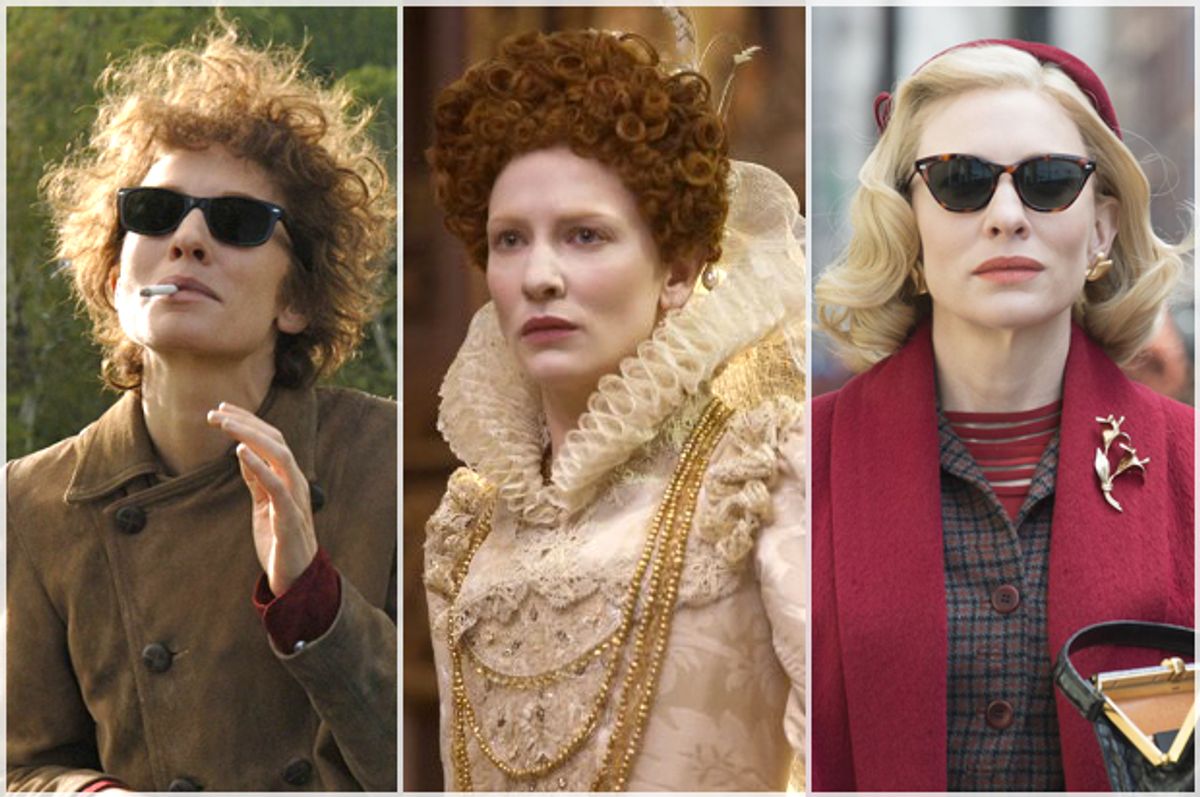 The first shot of "Carol" pans slowly across an imposing bronze gate, behind which its enclaves fade into darkness. But as the camera tilts upward and tracks back, this gate transforms into the metal grate dividing street from subway tunnel, the puddled New York sidewalk stirred by sounds from underground. Things are not what they seem. And things are about to get dirty.

Countless have already raved about "Carol" as the latest installment of Todd Haynes’ sumptuous revisionist cinema, for good reason: The film flat-out ravishes with pathos—it is moving but not mopey, dreamy while never soporific. Based on Patricia Highsmith’s 1952 novel "The Price of Salt," the film clearly owes equal influence to Haynes’ "Far From Heaven" (2002) and "Mildred Pierce" (2011), both depicting the ravages of midcentury constraints on the complex modern woman, the lingering effects of which are still suffered too often today.

In Carol’s case, the choice constraint is compulsory heterosexuality, and much has been made of how the movie’s transgressive nature isn’t worn on its well-pressed sleeve. As Margaret Talbot points out in the New Yorker, the word “lesbian” isn’t uttered the entire film (nor is “gay,” of course), and neither lead takes on the appearance or mannerisms commonly affiliated (or conflated) with deviation from hetero norms. Says producer Elizabeth Karlsen, “[I]t’s a film for everyone. And certainly when we’ve screened it, we’ve found young and old, male and female, straight and gay, have all responded.”

“Gay or straight, you can relate to this movie because it is just a love story,” assures actor Rooney Mara, 30, whose skittish Therese Belivet falls unabashedly in love with the sophisticated Carol Aird, played by Cate Blanchett, 46. “It really is not a political movie. It’s not a movie with an agenda, it really is just a love story.”

But in order to be so “relatable,” and indeed so transfixing, to a broad audience, Carol’s eponymous heroine must seduce not only our minds, but our bodies; straight-identified women (and men) have to buy in, and this buy-in must be based upon some level of identification, rather than brief imaginative dalliance.

And that’s where Blanchett, as always, nails it: Her seduction of Therese in a department store toy division seems not only possible, but plausible—viewers are as ready to be swept away as the dolls that line the shelves. After locking eyes with the Santa-hatted saleswoman from across the room, Carol advances, offhandedly questioning what items might appeal to a young girl on Christmas morning. “Bright Betsy?” Therese offers. “She cries and wets herself…” Before the credits roll, so too shall Therese, though in far less innocent circumstances.

Cate’s electric prowess carries the film through its languid two hours, striking the “melo” (and mellow) out of “melodrama.” A full 6 inches taller than Mara (even higher in heels, due to Therese’s girlish flats), Blanchett’s confident physiognomy is enhanced by form-fitting suits and skirts, her height and curves co-conspirators in concocting a potent pansexual allure. “Do you know what you’re doing?” Carol is asked before absconding west with her shopgirl. “No…when have I?” is the brash reply, but with her cocked head and sly grin, it’s impossible to believe.

In these and other scenes, Blanchett’s performance proves as strangely reminiscent of her turn as “Jude Quinn,” one of six Bob Dylan personae in Haynes’ "I’m Not There" (2007), as with any historical (or contemporary) “female” role she’s played. To a distressed Edie Sedgwick caricature (Michelle Williams) who has lost her cat at a Factory party, Blanchett’s Jude declares knowingly to his ultra-mod audience, “She has the sweetest little pussy.” Later, he’s slumped on a sofa pontificating to a music exec, “So I’m an asshole, right, because I’m the only one with any balls.”

We see this riveting arrogance again in "Carol," minus the jittery, fazed-out aloofness, and tempered by the accouterments of ‘50s high-femme. That is, Blanchett’s dragging it up in both movies, and as such, the intricacies of sexual identification unravel on-screen in a way that serves to both validate the raw intensity of queer desire while rendering it accessibly mainstream. In his review for the Guardian, Peter Bradshaw calls Carol “a predator, though a haughtily self-contained one...[with] the air of a very dangerous animal that has just been hit with a tranquilliser dart." I’d counter that if Carol is a hunter, coral claws perfectly filed, she’s the kind that lures a prey who is hungry to be eaten.

“I took what you willingly gave,” Carol reminds a tearful Therese as their trip comes to an end. It would be hard to dispute otherwise, the scene in which she forfeits her virginity even sexier and more convincing than when Elizabeth loses hers in Blanchett’s 1998 take on the “virgin” queen. "Elizabeth" offers a sneak preview of Blanchett's signature cocksureness: see her brazenly choosing to dance the “la volta” at her coronation banquet, or, in a more androgynous turn, her resigned stoicism while her locks are shorn before her sniffling ladies in waiting. “I have become a virgin,” Blanchett proclaims in the scene’s mesmerizing final shot; utterly androgynous, she’s more feral than ever, the irony of her reinstated maidenhood lost on no one (for more hair-clipped andro-Cate, check out Tom Tykwer’s "Heaven").

These transformations might be more clearly perceived through the lens of what queer theorist J. Jack Halberstam’s dubs “Gaga Feminism.” Reading Lady Gaga as “a kind of kinetic avatar for feminism,” Halberstam’s description of the pop icon might just as well be of Blanchett’s Carol: “as a set of performances of excessive femininity that explode the meaning of woman from within.” In his "Gaga Feminism: Sex, Gender, and the End of Normal," this new feminism is understood as “simultaneously a monstrous outgrowth of the unstable category of ‘woman’ in feminist theory, a celebration of the joining of femininity to artifice, and a refusal of the mushy sentimentalism that has been siphoned into the category of womanhood.” Cue Blanchett's Carol cocking a pistol from a luscious fur coat.

In a recent interview with Variety, the mother of four (and wife to playwright Andrew Upton) opaquely relayed that, offscreen, she’s been in relationships with women “many times.” But it would be too easy to credit her artistry to supposed “real-life” experience, and perhaps just as easy to brush it off as just another instance of the actor’s professional maturity. “[D]ivine as Blanchett is in the part,” says Slate’s Dana Stevens, “the character’s bruised glamor is a register in which we already know she can play.”

If she’s played it before, she has mastered it now, and glamour is selling it short. Carol Aird is the full realization of Blanchett’s combustible blend of refinement and swagger; she's a queer femme fatale, and, like Angelina Jolie (also candid about her past relationships with women), the actor’s getting older has only enhanced her ability to swing the axis of the gender pendulum.

“What a strange girl you are,” Carol tells Therese over midday drinks. “Flung out of space.” Within the queer parameters the film never questions, the pair orbit closer, just two celestial bodies.