Chuck Todd grills Donald Trump: "You're running for president of the United States!"

On "Meet the Press," the GOP frontrunner gets taken to task for his ludicrous 9/11 lies 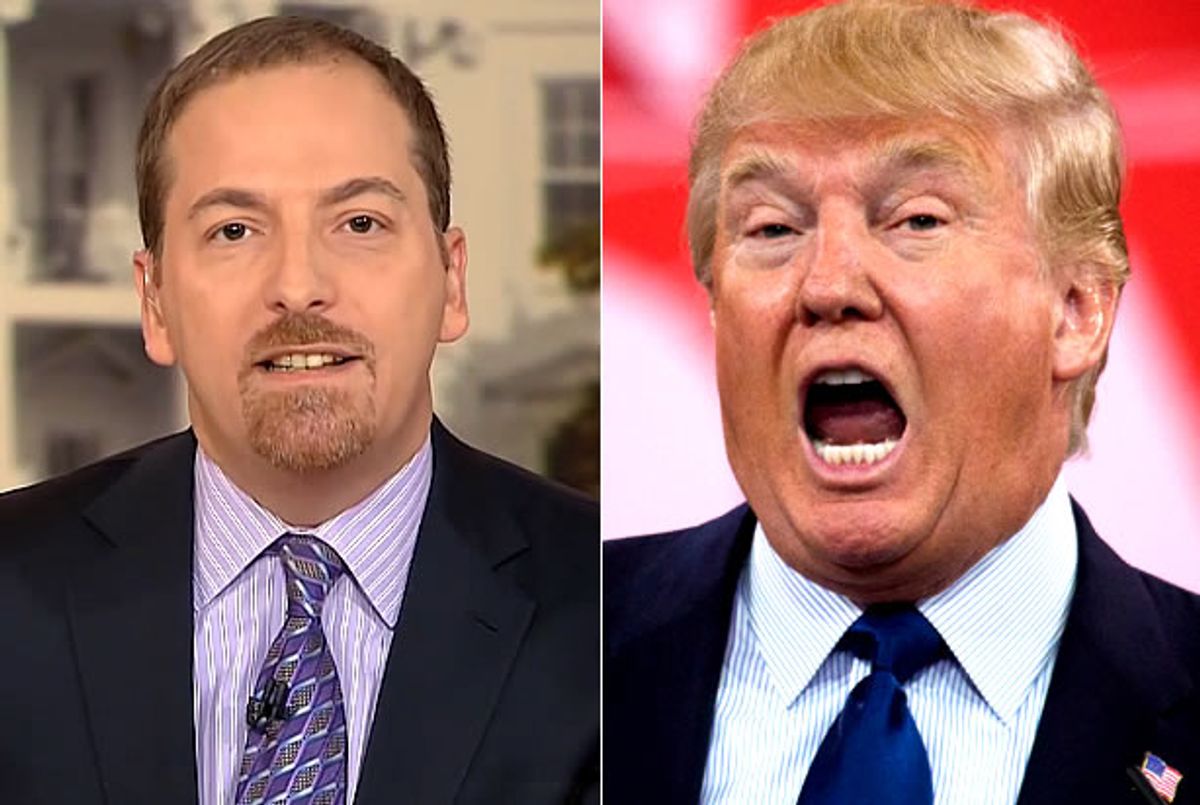 On "Meet the Press" Sunday, GOP presidential front-runner Donald Trump refused to "take back" his repeated assertion that he saw American Muslims in New Jersey celebrating 9/11, claiming that as long as other people also say they witnessed such displays -- and as long as it's hypothetically possible that such celebrations happened -- he has no reason to.

"I saw it, many people saw it," Trump insisted, "so why would I take it back? I'm not going to take it back." His evidence, such as it is, amounted to repeatedly saying "I saw it on television" and "so did many other people and many people saw it in person. I have hundreds of phone calls to the Trump organization saying, 'We saw it. It was dancing in streets."

"All around the world, that has been reported very strongly," he said. "Why wouldn't it have taken place? I've had hundreds of people call in and tweet in on Twitter, saying they saw it and I was 100 percent right."

Todd countered by noting that "just because somebody repeats something, doesn't make it true." To which Trump replied that it was "somebody" who said something, but "somebodies."

"I don't mean I had two calls, Chuck," he said. "People were saying they lived in Jersey."

An exasperated Todd replied "people were saying! If I said, ‘Well, people have said Mr. Trump’s not worth $10 billion, and people were saying,’ you would say that’s crazy. You wouldn’t make a business deal based on re-tweets and based on hearsay."

Trump replied, as is his wont, that "this is people in this country that love our country that saw this by the hundreds they’re calling and they’re tweeting. I have a very good memory, I saw it somewhere on television many years ago and I never forgot it and it was on television too."

Trump later cited a Washington Post article by Serge Kovaleski, the man whose congenital condition he mocked last week. "We're looking for other articles and we're looking for other clips, and I wouldn't be surprised if we found them," he said, "but for some reason, they're not that easy to come by." If that's not the most oblivious use of the phrase "for some reason" that you come across this week, it'll only be because you're paying attention to the Republican primaries.