According to Brian Kilmeade, American history is one long war against Islam. Only problem: He's dead wrong 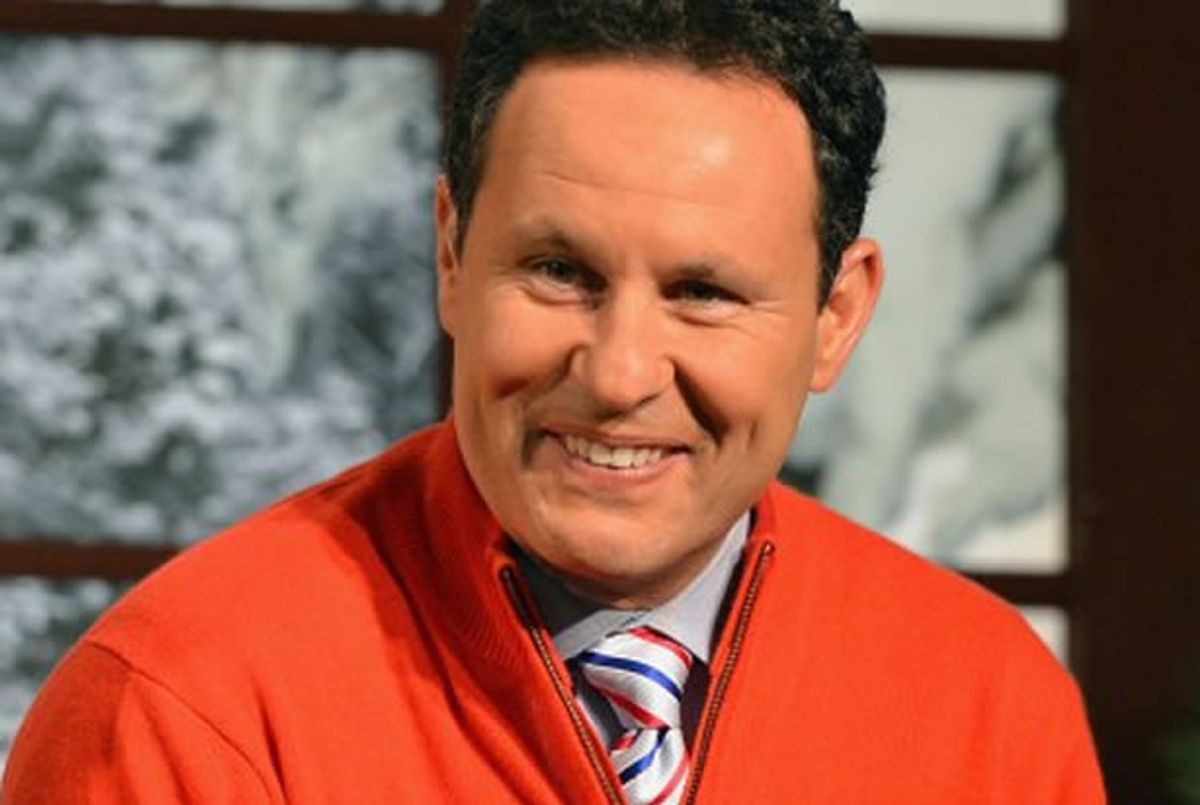 Another book has been issued by another popular right-wing personality in an effort to construct a narrative framing virtually the whole of American history as a war against Islam.

"Fox & Friends" co-host Brian Kilmeade joins Glenn Beck as the most popular purveyors of the notion that the infant United States’ 1801 conflict with the Barbary pirates of Islamic North Africa was a war that, in Kilmeade’s words, “we are still fighting.” This effort comes specifically by way of a book-length expansion on the historical episode that Beck had chosen to open his own book, “It IS About Islam,” a thoroughly racist affair I’ve written about previously.

Both Beck and Kilmeade portray the slave-taking and plundering pirates as monsters whose threat to Americans was not neutralized until President Jefferson deviated from the diplomatic strategy of Presidents Washington and Adams to take war to the Islamic Maghreb. By lacing the skirmish with the pirates into our national DNA, Kilmeade and Beck retrofit right-wing Islamophobia onto our nation’s founding to define the United States as genetically anti-Islam -- and, conversely, to define Islam as anti-American.

Though not topping the New York Times bestsellers list like Beck’s, Kilmeade’s anti-Islamic effort is doing well and helping to cement the narrative. Readers are apparently hungry for the facile, laughable case that because of some minimal battle with pirates in the late 17th and early 18th centuries the United States is somehow intrinsically at war with Islam.

This narrative sanctifies military conflict with Muslims as part of our nationalist quasi-religion: American exceptionalism.

Exceptionalism’s religiosity posits the United States as providentially peerless, the one nation blessed by God; but the addition of an eternal enemy, i.e. Islam, draws more fully a Biblical-grade narrative. Any good religious story needs a foil for the blessed hero, after all.

Kilmeade and Beck’s aims are embarrassingly transparent. The attempt is to cast our national narrative in terms of a sort of holy war. The threat of “Islamic extremism,” which Beck contends is really just Islam, is an existential threat, at least to our way of life, if not wholly and mortally so. But any sort of complex webs of causality that produce terrorism and retaliation can be dismissed and replaced with a hamfisted good-versus-evil narrative, updated only slightly to account for a degree of post-God Enlightenment principles out of which the nation was forged. Though not the explicit call for more an extremist Christian counter to Islam that Beck’s book is, Kilmeade’s tale still takes the shape of a holy war, with a prophet, in the form of a Founding Father, encountering and vanquishing the evil forces against which we define our own righteousness. It’s still a parable.

Thus, Al Qaeda and ISIS aren’t the complex products of geopolitics, war, failed states, the oil economy, and garden variety religious fundamentalism known to all faiths, but, rather, “the latest incarnation of a problem we’ve faced since our earliest days of independence,” as Kilmeade writes. Jefferson’s war is one that “we are still fighting.” In Kilmeade’s fantasy, it has always been through the vanquishing of the evil Muslims that we know our own goodness, then and now.

And so the project is thinly veiled prescription, not just historical description, its ostensible purpose. It’s no accident that Kilmeade’s story syncs with the present:

Jefferson, a former secretary of state, wins the presidency and abandons the dangerously naive diplomacy of his former position. It’s hard not to detect an analogy to the foreign policy of Secretary of State Hillary Clinton in the Obama White House in the way Kilmeade presents his case. In the most concise case made to prospective readers on the dust jacket:

“Over the previous fifteen years, as a diplomat and then as secretary of state, Jefferson had tried to work with the Barbary states (Tripoli, Tunis, Algiers, and Morocco). Unfortunately, he found it impossible to negotiate with people who believed their religion justified the plunder and enslavement of non-Muslims...So President Jefferson decided to move beyond diplomacy...launching the Barbary Wars and beginning America’s journey toward future superpower status.”

In other words: Jefferson learned that Muslims cannot be reasoned with like other humans. And not only did the decision to opt for war make us safe, but it initiated the military project that would eventually establish the U.S. as the globe’s most powerful empire, our rightful place. War with Muslims is a winning strategy--that’s the takeaway. And the Obama/Clinton impulse to pursue diplomacy--e.g., the P5+1 Iran nuclear agreement, working with Moscow on Syrian President Assad, and the ongoing intensive coalition-seeking for containment of ISIS--will be shown to be dangerous folly, goes Kilmeade’s implicit assertion. Islamic extremism of the present is no different than that faced at our nation’s founding, since these are “enemies who believe their religion justifies their cruelty and their plunder.”

It doesn’t take Noam Chomsky to find the gaping hole in Kilmeade’s logic. Kilmeade obsesses over the Barbary practice of slavery of non-Muslims and their “plunder,” which we’re to understand as antithetical to the incipient American nation. This is where Kilmeade’s whole project calamitously backfires. If your intent is to exhort against the horrific dangers of religiously inspired slavery and plunder on a world-historical level during those years, you don’t look to the Barbary states of North Africa; you focus squarely on the United States.

The American transatlantic slave trade was vastly worse than Barbary slavery, and it was founded on Christianity. Writing in the Journal of Religious Thought, Larry R. Morrison finds that “nearly every proslavery pamphlet, or article, or speaker made at least some reference to a biblical sanction of slavery.” Like the Quranic justification so frighteningly described by Kilmeade and Beck, Morrison writes that, to sanction the awful brutality of American slavery, “the appeal was always to the literal wording of Scripture, the authority of the Bible.” The American Christianity of the early decades of the nation was a savage culture, if we’re to believe that the Barbary culture was. In fact, it was more so.

The other Barbary crime, their tendency to “plunder,” is far exceeded, too, by that of the early American nation. And, like the Barbary pirates’ Islamic justification, the American theft was powered by Christian morality and notions of superiority and exceptionalism. From the earliest landing of Christian fundamentalists on other people’s land on the east coast of the eventual United States to the imperialist expansion to the Pacific under the aegis of the explicitly Christian “Manifest Destiny,” the theft of land and genocidal slaughter of native peoples was a Christian endeavor, if we’re to understand the piracy of the Barbary states to be Islamic.

A fairer appraisal of each would relegate the religious component to only the means by which American and Barbary brutality could be legitimized by the powerful practitioners and beneficiaries. “Because God said it’s OK” is a tired, but no less effective, way of normalizing a mode of control and power. A line of argument that insists on Islam during the age of Jefferson as a religion that inspires slavery and plunder is to simultaneously bring Christianity under indictment. And to insist that Islam is permanently guilty for its adherents’ crimes in 1801 is to invite others to associate Christianity of today, especially the nationalist-infused sort practiced by Evangelical white Americans, with some of the most horrific crimes against humanity of the modern era.

Beck chooses to end his book “It IS About Islam,” which begins with Kilmeade’s case about Jefferson and the Barbary wars in brief, with the words “All lives matter.” Using Kilmeade and Beck’s logic, one is free to condemn Beck for the whole white Christian history of state violence against black Americans, from the state-sanctioned slavery of the nation’s founding to police violence today. To lionize or secularly canonize the vicious Christian enslavers who founded the nation and invoke the racist reactionary rebuttal to the Black Lives Matter movement of today is to present a continuity of justified white supremacist and Christian state violence against black Americans. If one wanted to, one could condemn broad swaths of Christianity (or all of it, with Beck’s reasoning) in the very same way Kilmeade and Beck instruct us to fear Islam.

But where can innocence be found if we're each held to account for the worst crimes committed in the name of our beliefs? By Kilmeade and Beck’s reasoning, humanity becomes a metaphysical circular firing squad, with associative guilt leaving no one safe. With the full power of the U.S. military essentially pointed at the Middle East, it is extraordinarily reckless to makes claims that imply, or say outright, that Islam is our national enemy, now, at the founding, and for all time. It’s scarcely distinguishable from the logic that animates the attack on Paris or New York.