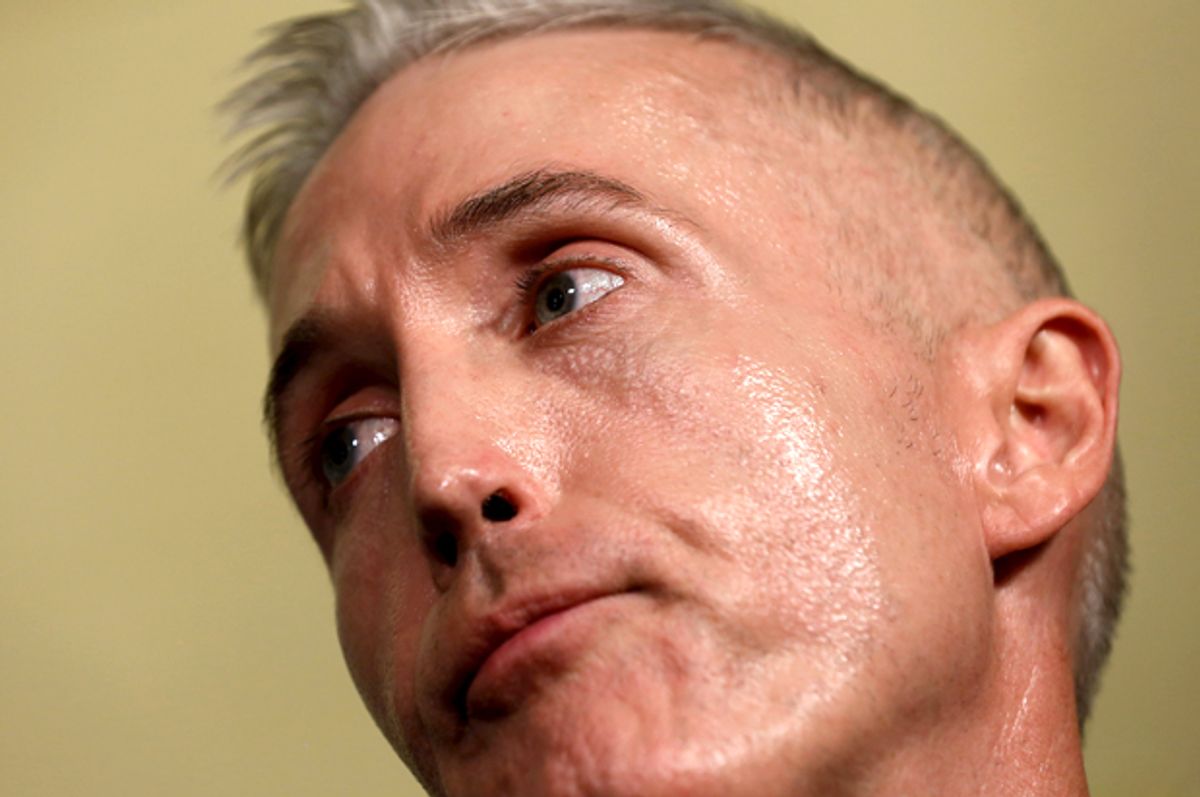 We haven’t heard a whole lot from the House Select Committee on Benghazi in the month since the embarrassing and thoroughly ridiculous Hillary Clinton hearing. The weeks leading up to that hearing were difficult ones for chairman Trey Gowdy, whose own credibility and the credibility of his investigation had been roughed up by his House Republican colleagues, who couldn’t shut up about how the committee was damaging Clinton’s 2016 campaign. At the hearing itself, Gowdy did himself no favors, getting into petty semantic arguments with Clinton and allowing the whole proceeding to devolve into a shouting match with the Democrats. It went so badly for the Republicans that Benghazi committee member Lynn Westmoreland, Republican of Georgia, began arguing that Hillary had cleverly tricked the Republicans into making her look sympathetic.

After all that, you can understand why the committee might want to lie low for a while and let things simmer down. But things aren’t getting better for Gowdy or his committee.

Last month, Maj. Bradley Podliska, a former investigator on the Benghazi committee staff, claimed that he’d been improperly and illegally fired from the committee. He also revealed some damning details about the committee’s work, claiming that it had become singularly focused on Hillary Clinton and the State Department, to the exclusion of other agencies involved in the Benghazi response. According to Podliska, he’d been discriminated against for taking leave to fulfill his duties as an Air Force reservist, and for resisting the committee’s intense focus on the State Department.

Gowdy and the Republicans on the committee aggressively pushed back against Podliska’s allegations, claiming that there was no discrimination based on his service, that he’d been fired for shoddy work, and that he’d mishandled classified information. Now, as MSNBC reported last week, Podliska is suing Gowdy for defamation, claiming that his statements about Podliska were demonstrably false.

The complaint Podliska filed is an interesting read. It accuses members of the Benghazi committee staff of questioning the need for Podliska to perform his duties as a reservist and paints a picture of an investigation that is hampered by unprofessional conduct, score settling and a toxic work environment. Obviously it provides only one side of the story, but Podliska notes at several times throughout that he met with the committee’s personnel director on multiple occasions and confirmed that he had no complaints or negative reports in his file right up to the point that his employment was terminated.

As for the allegation that Podliska mishandled classified information – a serious charge – he disputes it and turns it back around on his accusers. Per the complaint, Podliska was one of four staffers accused of “a security violation for allegedly putting classified material onto an unclassified system,” but he argues that the document in question only contained information from publicly available sources, and that his accuser had little understanding of the classification process and was “at best, poorly trained, and at worst, completely disregarded the most basic security management procedures.” According to Podliska, his accuser later acknowledged “that the information in the document at issue was not classified.”

That gives rise to the defamation charges against Gowdy, who gave a series of interviews when Podliska’s charges were first made public accusing him of mishandling classified information.

This all represents another headache for Gowdy, who has spent the better part of the last two months trying to maintain what credibility his committee still has. The real danger posed by the Podliska lawsuit isn’t the allegation that Gowdy’s committee has become an exercise in partisan sniping against Hillary Clinton – there’s evidence enough of that already. What Podliska’s complaint conveys is the image of a slipshod and unprofessional operation that is presided over by petty and incompetent managers.

Complaints of partisanship are standard fare when you’re talking about congressional investigations, and Gowdy has been deflecting them since day one. But he’s gone to great pains to portray his committee and its work as unfailingly professional and committed to the highest standards of conduct – a “serious investigation,” as he so often describes it. The nasty details of the Benghazi committee’s toxic internal dynamics revealed by Podliska’s whistle-blowing throws all that into question.