"Our protesters came in for abortions": Fear, slut-shaming, Planned Parenthood, and the truth about right-wing religious hypocrisy

Talk to providers and an amazing story emerges: It's not uncommon to go from picket-lines to the waiting room 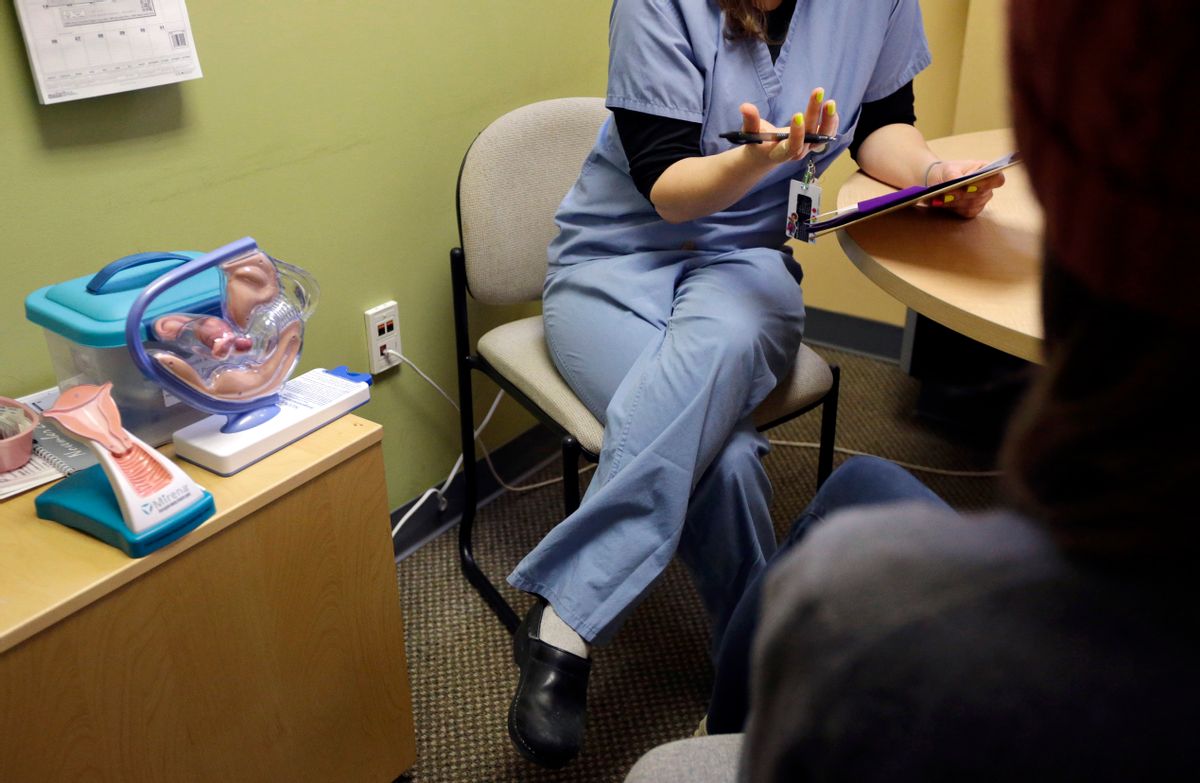 Up until my 30s, my only experience with abortion, besides attending pro-choice rallies, was having a blighted ovum (miscarriage) removed at Planned Parenthood because my doctor was going on vacation. Even though I was there for a different medical procedure (abortions count for only 3 percent of PP's healthcare services), I unexpectedly had to make my way through a gauntlet of angry people holding signs. The Planned Parenthood volunteer escorts bravely try to shield you, but I still had a few men and women get through, lunge at me and scream in my face, "Don't kill your baby!" 'Murderer!"--when I'd actually just lost a baby after struggling to get pregnant, which made my private agony even worse.

Years later, the protagonist of my novel is an OB-gyn. To do the background research, I spent a year shadowing a variety of doctors. All of them performed abortions. One did it reluctantly and rarely, as a "courtesy," so longtime patients wouldn't have to endure the psychological hell and threats of violence from the protesters at Planned Parenthood. Another primarily did abortions and gynecological care. The rest fell somewhere in-between. All of the doctors felt being trained in the procedure was part of a continuum of care for their patients.

The doctors did have their private thoughts about the procedure, and about their patients (do they, ever). This was not surprising. Nor was their concern for their own safety, particularly with the rising levels of inflammatory rhetoric and actual acts of violence. Following one doctor's circuitous route to her urban hospital left me tired before the day had even begun.

What was more surprisingly to me were the patients. I'm not exactly sure what I expected--a bunch of Riot Grrrl type feminists? Young women actively taking control of their sexuality? There was that, certainly, but there was also a lot of older women, married, with kids, who looked a lot like the protesters who'd been screaming in my face.

Indeed, my doctors told me, getting an anti-abortion protester as an abortion patient was actually not that uncommon. It even made a certain kind of sense: protesters liked going to a doctor they knew, one who was reliable and committed to her work. One doctor told me about an unmarried patient who stressed over getting "it" done before she'd start to show, i.e., the people at church would know; the doctor changed her schedule for this woman, who went out to continue screaming from the protest lines afterward. Conservative fathers with "important" careers brought in their daughters. One doctor recounted her days at a Catholic hospital pre-Roe v. Wade, and how Catholic mothers dragging in bearing their fifth, sixth, seventh child would beg her in a whisper for "hysterectomies."

Basically, the message is not getting out that likely around 40 percent of American women have had abortions, even though, a very large segment of this population is pretending they didn't--and are even actively working against that right for others. It's a little bit like the regularly repeated story (just change the names) of the homophobic congressman or clergy later caught soliciting on Grindr, only these women (and the men who go along with it) are protected by HIPAA.

I think about the self-righteousness implied in the term "pro-life." I, like most sentient beings, very much like life. And I have been pro-choice my entire adult life. Despite being of "advanced maternal age, " when I did get successfully pregnant, I declined an amniocentesis because I already knew I wouldn't have an abortion if the news was bad, so why expose the pregnancy to the small but significant risk of the test? A churchgoing anti-choice acquaintance confessed that she'd chosen to have early-early prenatal testing via chorionic villi sampling because, "I don't want to get too attached in case the news isn't good"--this is the same person who excoriated my pro-choice position by saying, "It isn't just a clump of cells, it's a life!" That she gets to be pro-life and I support baby-murder--this seems it should be the reverse.

Trying to render this disconnect in fiction didn't work, which is why I'm writing about it now.

According to many "pro-lifers" on Twitter, women who have abortions are "sluts" who are too "lazy" to use birth control. However, according to the Guttmacher Institute, the average patient has one or more children, was using birth control, and is Christian: 37 percent Protestant and 28 percent Catholic.

Interestingly, according to the Pew Research Center, "Opponents of legal abortion are most certain of their position... among those saying abortion should be illegal in all cases, nearly eight-in-ten are fully convinced of the correctness of their view.

Basically, anti-choicers feel very free to "otherize" a whole population of women, deny them the choice of whether they will become parents (or if they will even survive dire medical events such as ectopic pregnancies), foment legislation that denies healthcare to women or adds punitive restrictions (forced probing with a transvaginal ultrasound is a good example)--but when suddenly they need an abortion, an exception can be mentally made, the protection of HIPAA means they never have to actually face their dissonances. The staunch "life begins at conception," crowd also seems discreetly look away from fertility procedures that result in excess embryos, which are eventually "disposed of" or reduced through "selective reduction"--i.e., murdered and aborted in their own parlance. These are inconvenient truths that I suspect, if I followed a bunch of fertility doctors around, would also be revealed to be more "I can make an exception for myself" thinkers.

I used to wryly joke to my doctors that if I ever became king, I'd make it a rule that anyone who was publicly anti-choice would have to agree to be banned from ever having an abortion--and see how quickly these anti-choice views might change. Even Sarah Palin, not exactly the most introspective person, in a speech to an anti-abortion group, spoke of how she considered having an abortion when she found her son had Down Syndrome--not understanding that she's taking a pro-choice stance. Another patient I observed requested an abortion because she feared she'd been exposed to rubella, even though it was unclear the fetus would have had disabilities. But when it was her life, her future, suddenly it wasn't pro-"life" at all costs, but, as she rationalized: "Quality of life is also important." I wanted to ask her if she meant her quality of life, or the fetus'? I wanted to judge her as harshly as her anti-abortion brethren had judged me, a pro-choice feminist ironically working so that women like she could have their abortions safely and confidentially.

The Colorado Planned Parenthood gunman murdered a cop, a mother of two, and an Iraq vet. He cited the--false--story of Planned Parenthood selling fetal body parts for profit. A story that is still being passed around by presidential candidates like Carly Fiorina long after it was debunked. Yet, it's worth noting the complete silence on a story Mother Jones reported during the past presidential election, how Mitt Romney, now an anti-choice politician, actually did monetize abortion by having his firm, Bain Capital, invest in Stericycle, a fetus-disposal company, a deal for which he became the "sole shareholder" for "2,116,588 shares of common stock."

We are just one vote away from the Supreme Court overturning Roe v. Wade; who the next president is will largely determine whether Roe stays or the clock gets turned back. For pro-choicers, already under siege from various governmental bodies, domestic terrorists, protesters, mandatory waiting periods, the dwindling number of providers even willing to do abortions, this would be just another downward step in the regressive policies that are making American women's lives into something out of a Margaret Atwood novel.

For the anti-choice women who continue to sit complacently within their well of illogic, this standoff may at last force them to face the fact that they want abortion on demand. We're probably not going to see any evangelicals on the #TweetYourAbortion hashtag on Twitter, but wouldn't that be amazing? These women, part of that huge 40 percent, are secret sharers with the feminists, the secular, the progressives, the people they and their clergy call sinners. The pro-choice movement is pro-life, as it has been all this time, safeguarding a woman's right to write her own life story--including keeping its secrets.