The Internet is scrambling our brains: We spend more time online than sleeping -- and here's how it's messing us up 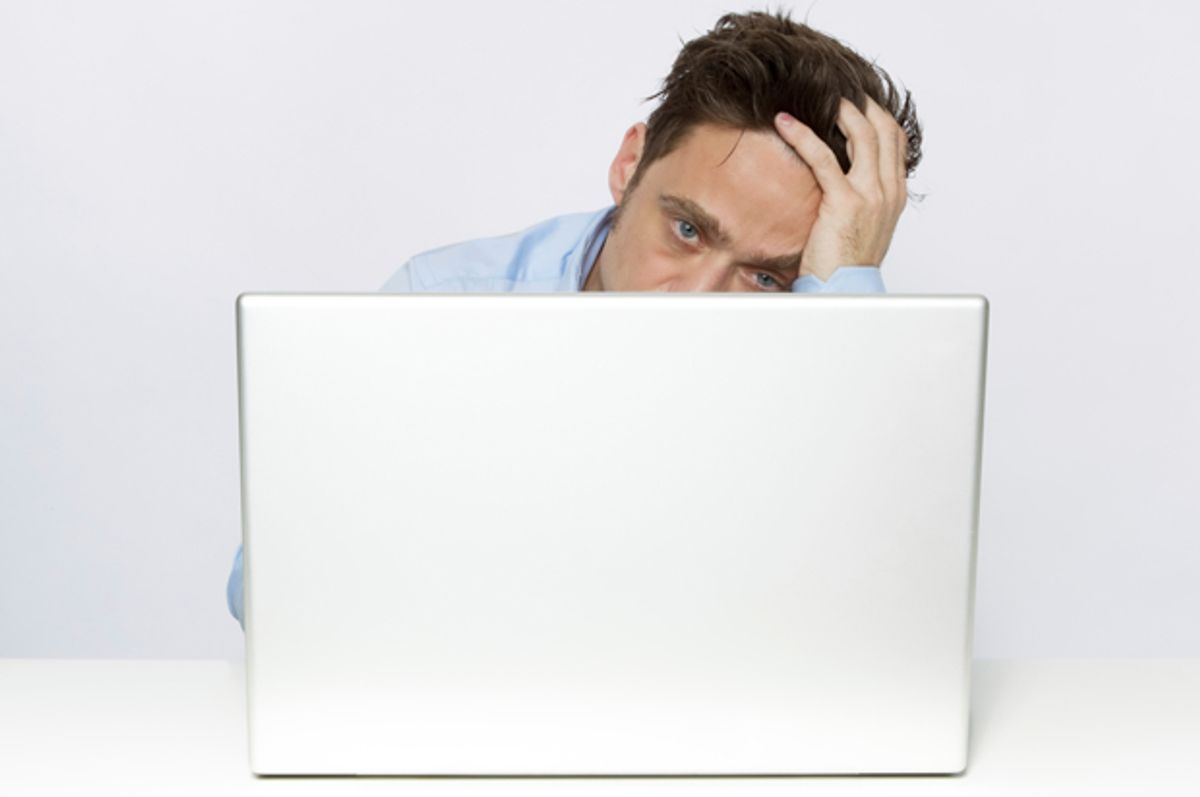 It’s hardly the first we’ve heard of it, but a Sunday New York Times piece took a hard and poignant look at the way online living scatters our attention. “One evening early this summer, I opened a book and found myself reading the same paragraph over and over, a half dozen times before concluding that it was hopeless to continue,” author Tony Schwartz wrote. “I simply couldn’t marshal the necessary focus.” Instead of reading book, he was getting lost online, “checking the traffic numbers for my company’s website, shopping for more colorful socks on Gilt and Rue La La, even though I had more than I needed, and even guiltily clicking through pictures with irresistible headlines such as ‘Awkward Child Stars Who Grew Up to Be Attractive.’ “

Schwartz – who runs The Energy Project consulting firm – tried to wean himself of the web’s distractions and to adapt a more disciplined life. He gave up alcohol, sugar, and junk food, but wasn’t able to scale back his time online.(Fun fact: Schwartz co-wrote Donald Trump's "The Art of the Deal.")

How widespread is this kind of thing? And how do people find ways to adapt themselves to the demands of online life? We called  Timothy Caulfield, a medical researcher and professional debunker, to get some perspective on the formal research. (He is the author of “Is Gwyneth Paltrow Wrong About Everything?,” about bogus celebrity health and happiness advice.)

We spoke to Caulfield, who teaches in the school of public health at the University of Alberta, while he was at a conference in Geneva. The interview has been edited slightly for clarity.

This story describes someone entirely unable to focus because of time spent online. Does the research show us that this is widespread, or is it just one man’s story?

There’s a lot of interesting research on this and things related. Studies in the U.K. and the U.S. that suggests that people spent – if you include both your laptop and your mobile phone – anywhere between five and eight hours a day. People spend more time on their phone and their computer than they do sleeping – this is significant.

The story really spoke to me. I‘m a writer – I’ll sit down and say, I’ll give myself half an hour without checking my email, or my Twitter account, or surfing. And it’s hard sometimes… I always find once I get that groove, hours will pass. But until you find that groove, it’s really hard. Part of it, for me – and studies show this – is the world is engineered for distraction. Market forces are at play. The world wants us to do this kind of surfing. You have an idea, you go looking for something relevant to it, and before you know it you find yourself hopping from website to website…

So studies show that this is a really common problem. There’s also a condition called nomophobia – the fear or being out of touch of your smartphone, or having your smartphone unable to get a connection. People can become anxious about this, and researchers have mapped the degree to which it’s the case. I’ve felt that say – I’m traveling, “Oh my God, I can’t check my email…” There are people doing research on this.

There’s been a lot of interesting research on this [online distraction]: Some people even claim it lowers our IQ. Being distracted, not focusing, not being present… You’re not as productive.

One study I love: People who think they’re good at multi-tasking are often particularly bad at it. They are distracted more quickly, they can’t concentrate. This is a broad phenomenon. Multitasking creates a cognitive drain: The more you switch in between tasks, the less efficient you become. There’s been a lot of interesting research to show that.

I actually play games with myself: If I finish this task I’ll buy myself an espresso.

A study that came out a few months ago said we spent about twice as much time on our mobile phones as we think we do: We are completely addicted to the ability to surf, to be distracted. Our brains are seriously invested in this.

There must be different ways that people deal with being online all the time. Some people are more sensitive to it, others don’t mind it. Maybe people who were “born digital” handle it better? Are there temperamental and generational differences? Who is the most scattered, who the least?

The demographic 25-to-45 are the ones most invested in this: We tend to think it’s teenagers, “kids these days.” But this is something that’s happening to middle-aged individuals. With older demographics it’s more problematic. As you get older it’s harder to multi-task. Studies show that.

That’s because the brain gets less flexible?

That’s right – studies show that as you get older it’s more difficult. But this is a phenomenon that has relevance to everyone. There are probably people who handle technology better – but it’s not the individuals who think they’re good at it. It’s the individuals who use it in a constructive way.

One caveat: We tend to condemn technology. Comic books, TV… There’s a lot of terrific stuff that flows from this technology. This is a balancing discussion.

Speaking of balancing: What kinds of things can people do? Most people don’t have jobs or lives that let them go entirely offline. What does the research show actually works?

One thing I’ve looked at very closely is the impact on our mental health of things like Facebook and Twitter. It’s hard to make strong statements – is this association or causation? But absolutely there is an association between being online a lot and involved on social media a lot and having less happiness. It’s a comparison phenomenon, also, that’s going on.

If these things are making you less happy, stop doing them! You can self-monitor: Which aspects of my interface with social media are making me unhappy?

Another thing people can do – it sounds really simple, but finish tasks. It doesn’t have to be a two-hour long tasks.

I’m not a very New Agey guy. But the whole mindfulness, being-in-the-moment stuff… That is pretty good. People should remind themselves to do that. I try to remind myself to be in them moment whether working, interacting with a colleague… Remind yourself to be in the moment: How essential is what’s happening in your real life compared to what you’re checking on your phone?

Those are touchy-feely things, but there’s data to back it up. If you do those things, your well-being increases.

The last thing I’m wondering: When Internet use became widespread, we got articles and books – Nicholas Carr’s “The Shallows” is one of the best – about what it would do to us. We suspected there was a problem of some kind, but it was still early in the process.

Overall, have those been proven to be excessively grim. Or does the research show that it’s all been even worse than we thought?

I’m going to say yes and no. The constant march online – the amount of time we’re spending – has been more than we expected. It’s constantly increasingly.

I also think this multi-tasking thing hasn’t abated. We’ve known about this for a very long time, but there hasn’t been much reaction to it. You see a few classrooms that have tried to ban wi-fi in the room; the market responded with these apps that you put on your phone or your computer that force you to not check your email… But there really hasn’t been a strong movement.

We’re talking about practical stuff – productivity of workers, our own personal happiness, out engagement with others… This technology is not going away. It will continue to be a large part of our lives. I look at my kids; it’s a huge part of their lives. I think teaching digital hygiene, at an early age, is a good idea. I try to remind my kids of this. It’s become kind of joke: Someone will be opening a present, and I’ll say, “Let’s all be in the moment!” And everyone will laugh at me.

But it’s true! We have to remind myself to be present. I can’t believe I’m saying that. But it’s true.