U.N. voted to partition Palestine 68 years ago, in an unfair plan made even worse by Israel's ethnic cleansing

Palestinians were 2/3rds of the population but offered 43% of land. Then, Israel ethnically cleansed it & took more 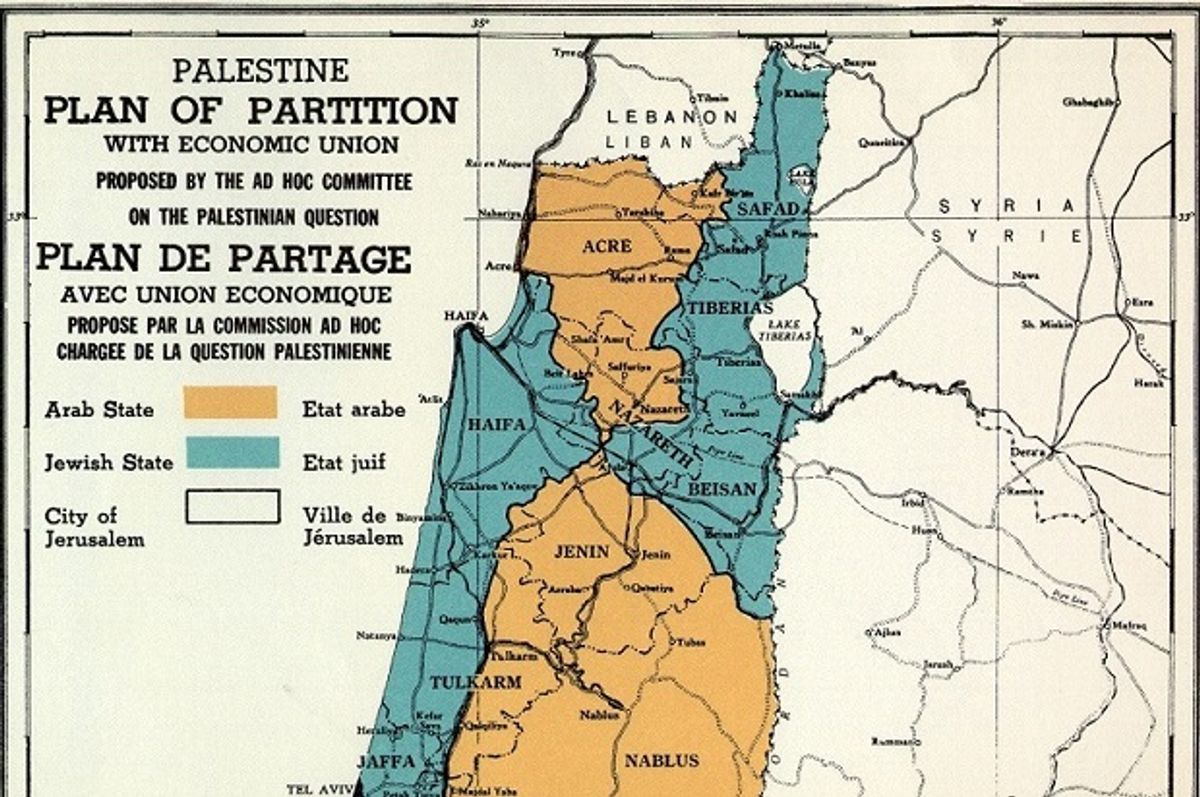 The front page of the November 29, 1947 edition of the New York Times read "[General] Assembly Votes Palestine Partition; Margin Is 33 to 13; Arabs Walk Out; Aranha Hails Work as Session Ends." Why were the Arabs angry? Because, for the indigenous Palestinians, the deal was a thoroughly bad one. Palestinians comprised approximately two-thirds of the population, yet were offered just 43 percent of their land in the deal.

"Aranha" refers to Osvaldo Aranha, a Brazilian diplomat. As president of the U.N. General Assembly, Aranha lobbied strongly on behalf of the Zionist movement (a settler colonialist Jewish nationalist political movement that called for the creation of the state of Israel). He delayed the vote on resolution 181 by two days in order to give the U.S. and other pro-Israel countries more time to pressure U.N. member states to vote for the plan. Scholar Fred Khouri writes that, in these two days:

"The United States and Zionists led the lobbying efforts of the pro-partition forces. The delegates, as well as the home governments, of Haiti, Liberia, Ethiopia, China, the Philippines, and Greece were swamped with telegrams, telephone calls, letters, and visitations from many sources, including the White House, congressmen, business corporations, and other fields of endeavor. As a result of these tremendous official and nonofficial pressures, Haiti, Liberia, and the Philippines finally agreed to vote for partition."

These last-minute changes ensured that resolution 181 would have the two-thirds majority vote needed to pass.

The following is the U.N.'s map of the proposed partition. The blue areas comprising roughly 57 percent of the land were to be allotted to Jews; orange areas were to be allotted to Palestinians. Jerusalem was to be left under the governance of the international community, because of its historical and religious importance for numerous religions and cultures.

The Partition Plan was never implemented, however. The very next day after it was voted on, the 1947-1948 war broke out.

"The orders came with a detailed description of the methods to be employed to forcibly evict the people: large-scale intimidation; laying siege to and bombarding villages and population centres; setting fire to homes, properties and goods; expulsion; demolition; and, finally, planting mines among the rubble to prevent any of the expelled inhabitants from returning."

Plan D "spelled it out clearly and unambiguously: the Palestinians had to go," writes Pappé. "The aim of the plan was in fact the destruction of both the rural and urban areas of Palestine," he adds, and it "contain[ed] a repertoire of cleansing methods that one by one fit the means the U.N. describes in its definition of ethnic cleansing."

Israeli founding father David Ben-Gurion -- the first prime minister of Israel and, until current leader Benjamin Netanyahu finishes his fourth term, its longest serving head of state -- saw no problem in using violence to force indigenous Palestinians off of their land. "I am for compulsory transfer; I do not see anything immoral in it," he said as far back as 1938.

This systematic expulsion of the indigenous Arab population is now referred to by Palestinians as the Nakba ("catastrophe" in Arabic).

Israel declared independence on May 14, 1948. The next day, the 1948-49 war broke out. In this war, Israel went on to annex even more land than was allotted to it in the Partition Plan. In the end, Zionist militias took control of around 77 percent of what had been Mandatory Palestine.

When they founded the country, Israel's leaders purposefully did not declare official borders; they sought to continue expanding. (They did not write an official constitution either. Still today, the Knesset, the Israeli parliament, admits that "Israel has no written constitution in the formal sense.")

Leading Israeli historian Benny Morris documented the intention of Israel's founding fathers to occupy all of the land. Ben-Gurion and Israel's first president, Chaim Weizmann, lobbied strongly for the Partition Plan at the time of the vote 68 years ago. Both leaders, Morris wrote, "saw partition as a stepping stone to further expansion and the eventual takeover of the whole of Palestine."

Israel's first prime minister insisted "No Zionist can forgo the smallest portion of the Land of Israel." In a letter to his son Amos, Ben-Gurion wrote:

"[A] Jewish state in part [of Palestine] is not an end, but a beginning. ... Our possession is important not only for itself ... through this we increase our power, and every increase in power facilitates getting hold of the country in its entirety. Establishing a [small] state ... will serve as a very potent lever in our historical efforts to redeem the whole country."

In 1967, Israel moved toward Ben-Gurion's goal of "getting hold of the country in its entirety." In the Six-Day War, Israel militarily occupied the remaining Palestinian territories, in a move deemed illegal by the U.N. and the international community.

Still today, Israel illegally occupies the West Bank, including East Jerusalem, and maintains effective control over Gaza, despite scores of U.N. resolutions demanding that it cease. It continues to slowly colonize the occupied Palestinian West Bank with a vast and ever-expanding network of settlements, roads, and military checkpoints -- which U.N. experts call the "root cause" of the escalating violence in the illegally occupied Palestinian territories.

Numerous prominent politicians -- including Israel's deputy foreign minister and ambassador to the U.N., among others -- have called for Israel to officially annex the occupied West Bank. In doing so, they would move well beyond the long abandoned U.N. Partition Plan and help turn Ben-Gurion's dream into a reality.