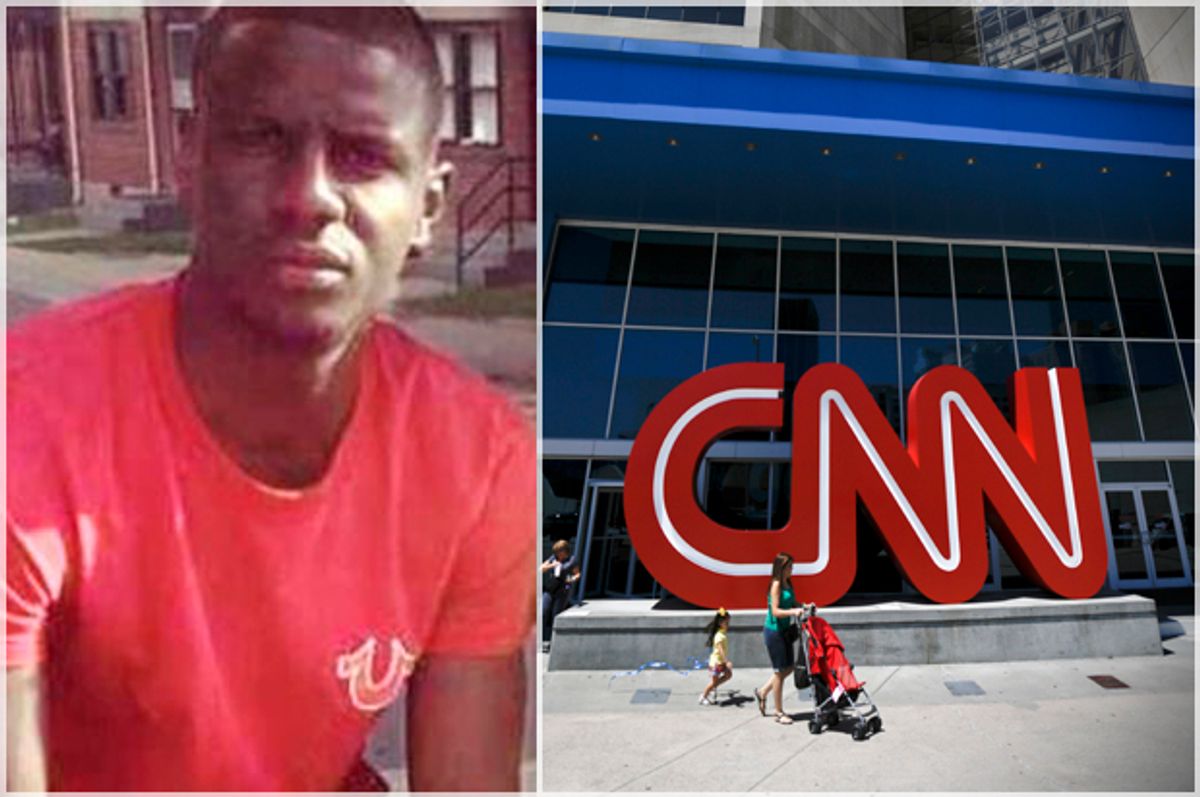 When black Americans are killed by police, the media has a long history of digging for any dirt it can find on the victims. In doing so, the media often implies that the victim bares some responsibility for being killed, or even that the death may have been justified.

When unarmed black teen Michael Brown was killed by Ferguson police, he was described by the New York Times as "no angel."

When unarmed black teen Tony Robinson was shot by Madison cops, the media was quick to point out he "faced some past troubles."

When unarmed black father Eric Garner was strangled to death by New York police while he was standing on the sidewalk, minding his own business, he was blamed for selling untaxed cigarettes.

We now have what appears to be yet another example in a long line of instances of the media blaming victims of police brutality for their own deaths.

Freddie Gray was arrested by Baltimore police in April for looking at a police officer and then running away. He committed no crime, and was not armed. Supporters say Gray was arrested for "running while black."

Gray was killed in police custody; his spinal cord was severed 80 percent at the neck. An autopsy shows his death may have been caused by a "rough ride" -- an act of harassment in which police deliberately swerve and rapidly accelerate and decelerate their car in order to hurt detainees in the back seat.

In May, Baltimore City charged the six police officers involved in Gray's death, which was ruled a homicide, with crimes ranging from second-degree murder to illegal arrest.

"The first of six city police officers went on trial Monday in a closely watched case involving a 25-year-old black prisoner who died after being shackled and placed without a seat belt in a Baltimore City police van.

"The April 19 death of Freddie Gray, the son of an illiterate heroin addict, made him a symbol of the black community's distrust of police."

CNN, the leading U.S. news outlet, described the unarmed and innocent victim of police brutality as "the son of an illiterate heroin addict." Those are some of the only words used to describe him. The only other sentence about Gray's life in the almost 1,000-word article is "At 25, Gray already had a lengthy rap sheet."

Every time Gray is described -- in the mere two lines in which he is allotted space -- he is portrayed in a negative light, even though he was completely innocent when the police arrested and killed him.

Unlike white victims of crimes, or even white perpetrators of crimes, black victims of police brutality like Freddie Gray are not humanized in any way.

After facing backlash on social media and elsewhere, CNN removed the line from the article. In the new version, an editor's note was put at the bottom that reads "A reference to Freddie Gray's mother was removed from this story because it appeared out of context."

"Out of context" is quite a euphemistic way of putting it. How was the sentence pertinent in any way in the first place? Gray appeared to have had a hard life, and a difficult upbringing. So what? Should he be executed by police for being raised in what has been described as "Baltimore's slow burn of poverty"?

Before the CNN article was edited, it was archived at the WayBack Machine. A screenshot of the original piece follows: The fact that the line was included in the article is one thing, yet the fact that it is in the second sentence of the entire piece is something else entirely.

The only thing sentences like this do is facilitate an atmosphere of victim-blaming, in which police are seen as justified in killing an innocent, unarmed black American.

Dylann Roof was a far-right white supremacist extremist with neo-Nazi ties who slaughtered nine black people at a church in South Carolina in June in hopes of inciting a race war. Just after massacring nine black Americans in cold blood, Roof was greatly humanized by the media, which described him as "just a normal kid" and "a really sweet kid" who "was quiet" and "only had a few friends." It blamed his violent right-wing extremism on "internet evil" and mental illness, noting he "was raised in a home destroyed by domestic violence."

Robert Lewis Dear shot 12 people at a Planned Parenthood clinic in November last week, killing three. Authorities say he was "definitely politically motivated" and note the mass shooting was likely an act of domestic terrorism. This did not stop the media from doling out sympathy. Just after shooting 12 people, Dear -- who was well known to police, had a lengthy criminal record, and faced charges for allegedly abusing his wife -- was characterized as "adrift and alienated" and a "gentle loner."

Elliot Rodger massacred six people and injured 14 more near the campus of the University of California, Santa Barbara in May 2014. He explicitly stated that his attack was motivated by extreme misogyny and that he sought to "punish" women collectively for "rejecting" him in the past, yet the media called him "a quiet, troubled loner."

In the end, white terrorists get more sympathy in the U.S. media than black victims of state repression.