David Brooks has lost it: His bizarre "Hamilton"-infused climate change column is the worst yet 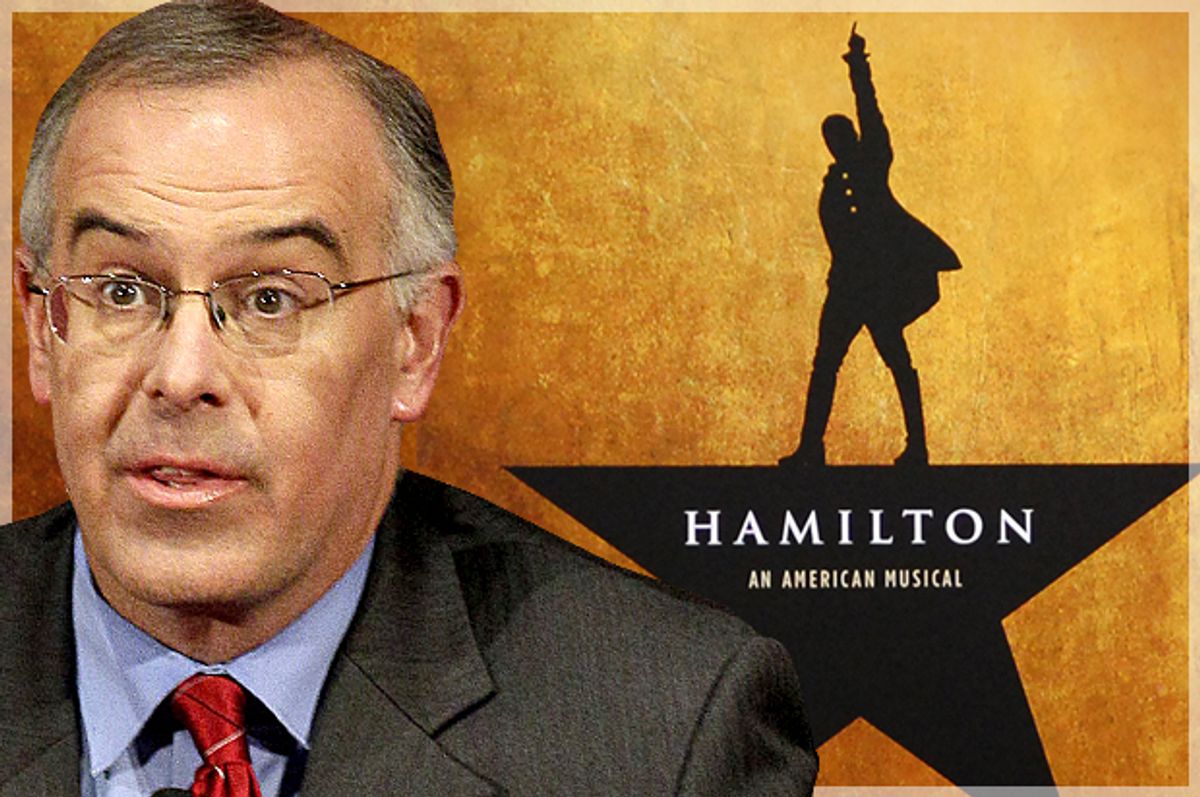 The New York Times columnist David Brooks often has smart things to say about politics, culture, and human motivation. Sometimes he’s tough on his own tribe – conservatives – and calls out extremism and ignorance on the right. (He once called Sarah Palin a "fatal cancer to the Republican party.")

Lately, he seems to be drifting to the center a bit, and has denounced right-wing intolerance. Other times, though, his writing can be a bit bizarre. Today’s column saw a mix of all of the above.

Here’s the way the column – “The Green Tech Solution” -- starts:

I’ve been confused about this Paris climate conference and how the world should move forward to ameliorate climate change, so I séanced up my hero Alexander Hamilton to see what he thought. I was sad to be reminded that he doesn’t actually talk in hip-hop, but he still had some interesting things to say.

Now, besides the fact that it’s hard to imagine Brooks having anything to do with hip hop, this is a pretty terrible idea. To be fair, he’s been an admirer of the conservative Founding Father since before the musical “Hamilton.” But how often do these columns – by Brooks or anyone else – that turn on a pretend dialogue with a departed figure succeed at anything besides seeming cutesy? They’re about as successful as Tom Friedman’s open letters to world leaders.

Even weirder is that the Hamilton that Brooks summons seems to read National Affairs, is familiar with Weight Watchers, and knows what the Soviet Union was. (Brooks writes, aptly, that “a vast majority of Republican politicians can’t publicly say what they know about the truth of climate change because they’re afraid the thought police will knock on their door and drag them off to an AM radio interrogation.”) Why build your column around an 18th century figure if you are going to pepper your piece with contemporary references?

The most frustrating thing about the column, though, had more to do with Brooks’s Reaganesque ideology and less to do with the onetime Secretary of the Treasury. Here’s Brooks on what the Paris conference was discussing:

Well, this is about as grim and pessimistic an assessment of coming up with limits for carbon as anyone could dream up. There’s no question that there’s sacrifice involved, but isn’t Brooks the communitarian conservative who often talks about shared purpose, national service, and building your life around deep meaning rather than selfish acquisition? Doesn’t saving the world from heat death and constant flooding fit most of those categories?

Can’t we reframe just about everything we’ve ever done as a nation in these terms if we’re similarly glib, including wars, like World War II, that most of us favor to the riskier Middle Eastern excursions that Brooks himself endorsed? Don’t we spend money on people in other parts of the world, because it’s the right thing to do? Don’t politicians on both sides talk about our debt to the generations that will follow? (For a story that faces up to the challenges of the Paris meeting, try this.)

Brooks makes a good point when he writes that governments cannot fix the environment on their own. “The larger lesson is that innovation is the key. Green energy will beat dirty energy only when it makes technical and economic sense.” Well, yes – but was anyone really contesting that? And a bunch of boutique green firms are not going to solve this on their own, either. The most substantial recent environmental action in the country has taken place in California, where the effects of a multi-year drought have been reduced because of government restrictions. Innovation will help, but you need a basis on which it can operate. Brooks seems to be nodding in that direction near the end of his column, but he’s still stacking the decks a bit.

The column’s conclusion -- “Sometimes like your country you got to be young, scrappy and hungry and not throw away your shot.” – is an attempt to nod in the direction of Lin-Manuel Miranda’s show. Okay, that’s nice. But the next time David Brooks starts to write the phrase “you got to be,” can someone please save him from himself?